NewsPaperthe art of publishing
HomeNewsThere is no equivalence between today’s economic migrants and Jewish children fleeing...
64 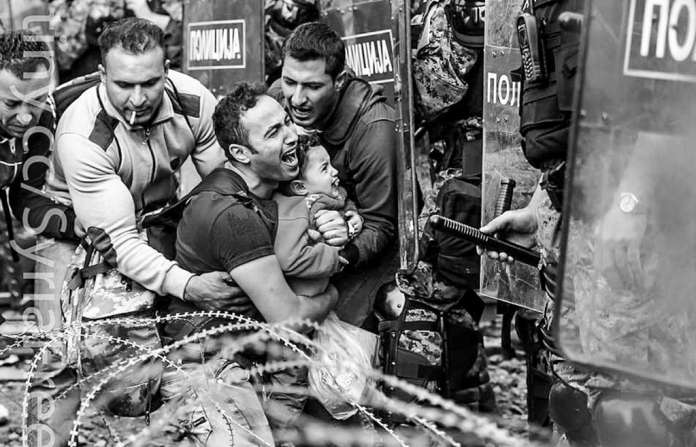 Kathy Gyngell writes: Today marks the 80th anniversary of the first Kindertransport. The BBC radio programme Broadcasting House chose this morning to focus on our comparative lack of conscience with respect to the recent migrant crisis. It featured an Observer report of ‘brutal evictions’ of migrants in Calais as well as a conversation between an Afghanistan male migrant and a 90-year-old Kindertransport survivor, who he told was luckier because he did not remember his parents at all.

Fortunately Peter Hitchens was on hand to restore some perspective: ‘I do think we should be careful about making comparisons between what was happening to the Jews in the late 1930s and what is happening to those people migrating towards this country now. I think there was one terrible episode recent history which was the mass murder of European Jews by German National Socialists and it doesn’t really do to compare it or equate it with anything that is going on now.’

This is what Karen Harradine so cogently argued in a piece we republish today in memory of that remarkable voluntary life-saving effort that was the Kindertransport.

Recently, the BBC had another bash at reminding us how dreadfully racist we all are for daring to protest against porous borders. For an organisation that has such a considerable anti-Israel bias it sure likes to make use of Holocaust survivors when it comes to promoting its own immigration agenda. The BBC reported on the visit of two Holocaust survivors, Lord Alfred Dubs and Rabbi Harry Jacobi, to the Calais migrant camp, nicknamed ‘the jungle’.  The report so was so blatantly manipulative and disrespectful that I wanted to throw my laptop out the window while I was watching it. The clumsy attempt to create a moral equivalence between economic migrants and Jewish children fleeing the Nazis is vile.

Despite the BBC’s attempts to create moral authority there are major differences between the children of the Kindertransports and those who are part of the current migration crisis.  Jews were fleeing certain death in Nazi-occupied Europe. Britain was the only safe haven for them. The current migrants in European countries like Italy, France and Germany are not at risk of genocide. But though they are safe many are desperate to come to the UK.  Britain seems to have taken on mythical status for these migrants, thanks to our generous welfare policies and open borders.  Migrants are so keen to reach our shores that they are risking their lives to do so.

Unlike current economic migrants and refugees in Europe, Kindertransports children did not receive any public funding. The Kindertransports were privately funded by the Refugee Children’s Movement and volunteers were sought to house them. Age limits were strictly defined and adhered to. In comparison, public funding is used to subsidise the needs of both refugees and economic migrants living in the UK and several European countries have had detrimental issues with migrant children lying about their ages.

As much as I admire Lord Dubs and Rabbi Jacobi in their attempts to highlight the plight of migrant children, I do believe they are misguided. The BBC wants us to feel like we are the worst racists ever by not supporting an open door policy on immigration. The  emotional conflagration between economic migrants and refugees, which sadly includes children, helps nobody. I too feel desperately sorry for the children at Calais. To hear a child crying in such distress is harrowing and it makes me angry. My anger is not directed at our government but towards callous families, from countries not at war, who send their own children on such perilous journeys. These parents are prepared to risk their own children’s well-being by abandoning them to the squalor of migrant camps. My fury is also aimed at the unscrupulous people traffickers who are not beyond putting these children into debt bondage to pay for their passages.

We do need to give sanctuary to genuine child refugees from war zones but using the Holocaust to promote the politics of BBC apparatchiks is obscene. By indulging in extreme virtue-signalling the BBC misses the opportunity to expose real evil and ignores the refugees who are truly in the most precarious position of all – the Christians of Iraq and Syria.

Dubs, Jacobi and the BBC would be better off following the example of Lord George Weidenfeld, who was rescued from the Nazis by the Plymouth Brethren and the Quakers. In his quest to show his gratitude to those Christians who saved him, Weidenfeld launched his Safe Havens Fund last summer, which flew 150 Syrian Christians to Poland.

Weidenfeld recognised that these Christians, amidst the clamour of the migrant crisis, are the forgotten refugees.  They desperately need our help. These are not the economic migrants that the BBC is so fond of using as a political stick to beat us with. Instead they are true refugees facing mortal danger).

According to the Barnabas Fund, a charity that also rescues Christians, Iraqi and Syrian Christians are being persecuted by Isis. The persecution of Christians in Egypt, Pakistan, Nigeria and Dafur is also endemic. Those who do manage to escape face hazardous journeys, in which some are killed by Muslim migrants. Even if these Christians survive long enough to reach Europe they are still not guaranteed safety from torment. Recent reports have shown how Christian refugees in Germany are being persecuted by their Muslim counterparts in the hostels they share. The fact that this is occurring in a traditional Christian country is a scandal. These are the true victims that the BBC ignores in favour of political preaching.

How much we can help those Christians suffering and being persecuted in Pakistan, Darfur, Egypt and Nigeria is debatable. But we do have the means to help the Christian refugees of Iraq and Syria, either by financially supporting projects like those of Weidenfeld’s or by ensuring that vulnerable Christian refugees, who have found sanctuary in Europe, are protected from racist attacks.

The BBC seems to be enthralled by the Left’s love-in with Islamism and the EU and this dictates their policy on refugee reporting.  Some of the migrants that the BBC claim are victims of the big bad West have very likely engaged in the persecution of the one minority that the BBC ignores – Christians.  We are at war with Islamic fundamentalism, whether we like it or not.

The Christians of Iraq and Syria are an endangered minority.  We cannot disregard our Judeo-Christian ethos because we are afraid of confronting Islamic terrorism.  Like Weidenfeld we have to be brave and help these Christians while ignoring accusations of racism as we do so. The real moral equivalence between the Holocaust and today’s migrants is to be found in the story of Lord Weidenfeld and his debt of gratitude to the Christians who saved him.