Theresa’s tainted ones fall further behind in the leadership stakes

YESTERDAY Conservative Home published the latest of its leadership surveys which shows that the views of the membership being polled has congealed around the same two former cabinet member front-runners, with the most highly placed remainer, Amber Rudd, in ninth place on 3.38 per cent.

Still at the bottom end of the table in the charnel house of political ambition sit the immutable quartet of Philip Hammond, David Lidington, Gavin Williamson and Brandon Lewis, none of whom managed to breach the – for them – tricky 1 per cent popularity threshold. 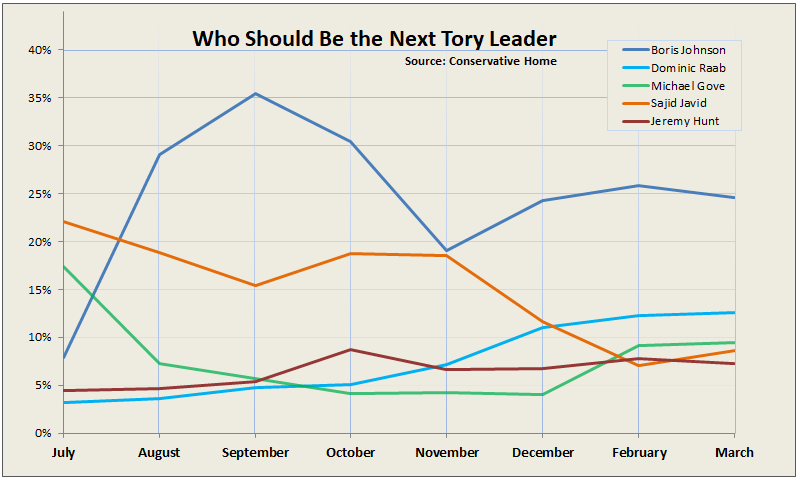 Sajid Javid slips modestly ahead of Jeremy Hunt into fourth position behind a still mildly resurgent Michael Gove, but none of these three looks to be threatening Dominic Raab (second with 12.54 per cent), who with Boris Johnson (top with 24.54 per cent) enjoys the advantage of having refused to equivocate by remaining in government.

The trend lines produced here at the time of the last survey suggested that Johnson would continue to perform well as would Dominic Raab. But for the next group, all of them tainted with membership of Theresa May’s cabinet, the trend has always been mediocre. 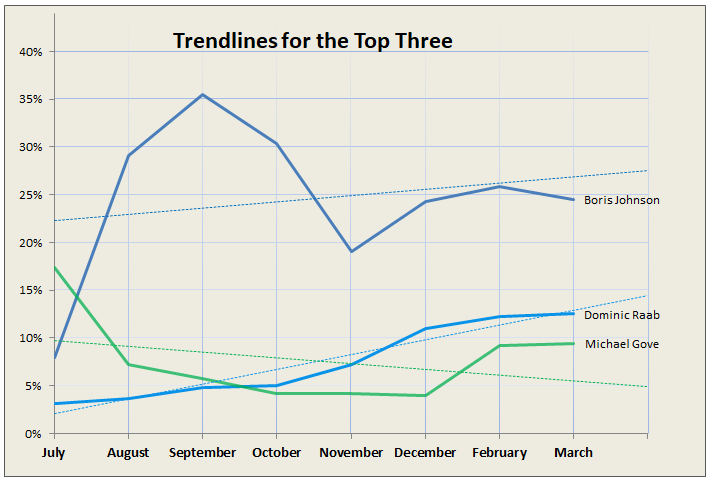 The party membership must be a continual annoyance and disappointment to the parliamentary party for expressing preferences so much at variance with what MPs themselves know to be best, but then the logic of parliamentarians is a truly wonderful thing.

For example, when the possibility of an extension to Brexit was mooted by Theresa May I emailed my MP, Anne Milton, last week asking what the Prime Minister might ever say that I should accept at face value.

By way of response, I was sent some boilerplate and here are a couple of extracts:

I do not believe that there is a majority of MPs who will support leaving the EU without a deal. If and when it is shown that there is no majority for no deal, there will then be a further vote on whether to ask the EU to extend Article 50.

This is crucially what I and other Government Ministers have worked very hard to secure from the Prime Minister.

Mrs May repeated often that no deal was better than a bad deal but where were these MPs on the numerous occasions when this undertaking was given and why didn’t they speak then? How can Mrs Milton and her colleagues have the brass neck to claim credit for persuading the Prime Minister to overturn her promise to the electorate?

I know from reading through the thousands of pieces of correspondence I have received on Brexit that many people will disagree with my concerns, but I will always act on what I believe is right for the country.

The time for Mrs Milton and others to act on what they ‘believe is right for this country’ is long past. I pointed out to her in a follow-up email that she must have been careless or poorly informed when she approved the referendum and the Article 50 notification and so did not properly know what she was doing. Alternatively she was now turning her back on what she previously approved in all conscience and is claiming a greater loyalty to her lofty personal convictions than to her previous voting record, manifesto commitments and party policies.

Last July it was suggested here that the Brexit vote should not be mistaken for populism but that populism is what would follow in the UK if the referendum result was not properly respected and implemented.

Mrs Milton and her colleagues are mistaken if they think that voters give a fig for their high-flown principles. To most people, their member of parliament is a mere cipher and if the current lot on the Conservative benches aspire to continued employment there as Conservatives, rather than standing in the weathercock interest, they ought to persuade the Prime Minister to stand down and, failing that, launch an immediate vote of no confidence in her.

Opposition parties would be bound to pile in behind such a measure. Even the robotic and obdurate May would be forced to accept that she had finally hit the buffers which would allow Conservative MPs to offer Party members a choice between two Brexiteers to replace her. If this means a postponement of Brexit day, a ‘stopped clock’ in negotiations with Brussels or WTO Brexit with bargaining to follow, then for the sake of democracy so be it.