This crazy capitulation on overseas students 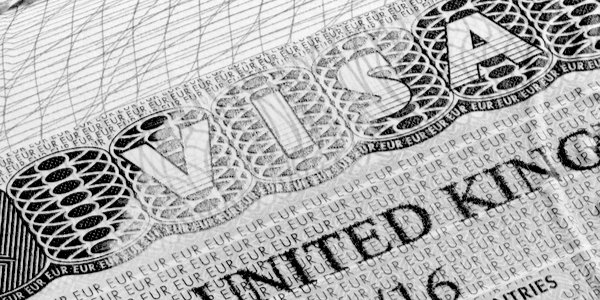 FOREIGN students at universities with a track record of upholding immigration checks are to be given two years after graduating to find work at any skill level, overturning a key plank of Theresa May’s immigration policy.

Currently, most graduates with a bachelor’s or master’s degree are allowed to look for work in a highly-skilled role for four months (the period for those at 27 top UK universities is six months).

This proposed post-study work visa – to apply to students who start courses in 2020/21 at undergraduate level or above – is reckless and short-sighted. It does not even concentrate on the ‘brightest and best’. Instead it opens the gates to the same free-for-all as before, irrespective of subject or academic merit. (For more, read this article.)

Of course, it will please employers who are likely to get an army of shelf-stackers as well as others who really might promote the economy.

But the last thing that the UK needs when facing a competitive world is yet more unlimited and, at least initially, unskilled labour.

A similar route was open until April 2012. It was described as one of the most generous schemes of its kind in the world. Yet it was closed, in part due to a belief by then Home Secretary Mrs May that a student visa system should be designed to ensure students come to study, not to work.

There were also concerns that significant numbers of people on this route were employed in ‘unskilled’ roles. Immigration into lower-skilled work does not benefit the UK’s GDP per capita, a key measure of economic performance.

An official assessment found only 9 per cent of a sample of those on the former Tier 1 post-study work visa to be in skilled employment (see Home Office table below). 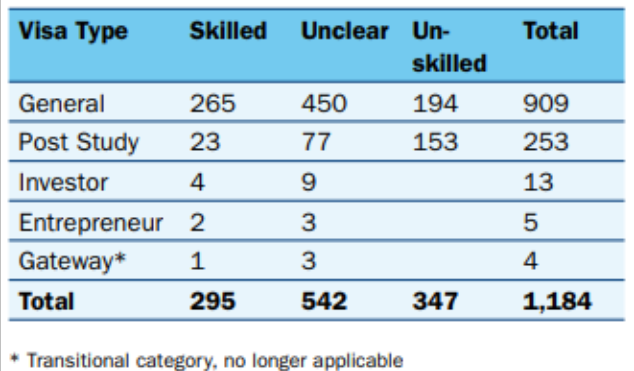 Last year, the Migration Advisory Committee (MAC) noted that ‘the earnings of some graduates who remain in the UK seem surprisingly low’. In light of this, they said very clearly: ‘We do not recommend a separate post-study work visa.’ The question is: why did the government dismiss this wise advice? (Also see our press comment.)

We hope that this significant concession to the higher education lobby was rooted in more than a shallow and short-term desire to boost liberal credentials at a time of acute political pressure. That would obviously not be an optimal way to formulate immigration policies that are likely to have far-reaching consequences.

As for business, it should concentrate on improving its dismal productivity (and offering decent wages to UK recruits) rather than clamouring for more cheap labour from abroad.

Bogus claim 1: They suggest ‘a post-study work visa would boost the economy’. The Higher Education Policy Institute (HEPI), London Economics and Kaplan International made such a claim earlier this year. However, as noted above, a significant number of those who take advantage of this route are likely to go into lower-skilled roles. The chair of the Migration Advisory Committee noted in October 2018 that immigration into lower-skilled work makes the UK a ‘slightly lower-wage and lower productivity economy’.

Bogus claim 2: ‘The UK is a hostile environment for overseas students’ (another claim by HEPI). This is easily debunked by a glance at the latest study visa statistics. The Home Office states: ‘In the year ending June 2019, sponsored study visa applications for the Higher Education (university) sector increased by 11 per cent to 201,919, the highest level on record.’

The higher education industry claims ‘the UK is falling behind its global competitors when it comes to international students’. There is more truth to this. However, a better way of attracting top students would surely be, as the MAC has put it, to ensure that demand for courses is ‘built around the quality of the education offered’.

Coincidentally, the OECD has released analysis which points to the need for ministers to do far more to tackle poor quality degree courses and sub-standard universities which leave some graduates earning less than school-leavers.

The reintroduction of this flawed visa also risks harming the prospects of young school-leavers in the UK to take up entry-level jobs. There are 790,000 young people aged 16 to 24 years not in education, employment or training (28,000 more than the previous quarter – see ONS figures , besides the large number of under-employed who want more hours of work (see our paper: ‘Likely scale of under-employment’).

Meanwhile, there are ample post-study work arrangements already in place. These include:

· The right for an unlimited number to move into skilled jobs provided they earn just under £21,000 per year.

· Tier 4 to Tier 2 switchers being able to apply after they have sat their last exam, as opposed to have to wait until after having passed their course.

· Masters students being able to stay in the UK for slightly longer after completing their studies (via a Tier 4 pilot scheme).

The demand to move into highly-skilled roles has not been huge. The uncapped route for student visa holders to move into skilled work is used by only around 5,000 people each year.

The public should not be misled by exaggerated claims that all students go home. While the vast majority appear to comply with visa requirements at the moment, significant numbers of former students have remained here through extensions for work, further study and marriage and after being granted asylum.

Although a desire to limit migration was the single most important of the many factors behind the Brexit vote, the paradox is that no senior government figure appears to have any interest in limiting migration, nor do any of the other main parties.

This at a time when 30million people – or three in five of UK adults – want immigration to be cut, including many who wish to see a significant reduction – see our paper).

Finally, it is important to ask whether the enforcement challenges of this new visa have been thought through. Given its myriad other challenges, what are the prospects of the Home Office being adequately supported and resourced to ensure that it is effectively enforced?

If you would like to read more about our take on student immigration, please go to our research page on this topic.