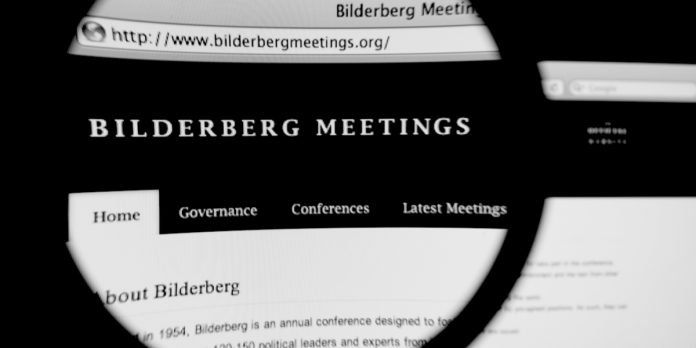 TO my regret, I was overlooked once again for an invitation to this year’s Bilderberg Meeting held from Thursday to yesterday in Washington DC. I had hoped that my incisive insights into world affairs would cause the organisers to require my input. Then again they might have detected in my scribblings a profound detestation of the scoundrels who attend their gatherings.

Despite being taxpayers and shareholders, we plebs are not privy to what is agreed at the forum . . .

Its press release says: ‘Thanks to the private nature of the Meeting, the participants take part as individuals rather than in any official capacity, and hence are not bound by the conventions of their office or by pre-agreed positions. As such, they can take time to listen, reflect and gather insights. There is no detailed agenda, no resolutions are proposed, no votes are taken and no policy statements are issued.’

Some 140 individuals from the US and Western Europe were invited to this year’s shindig. They included the usual suspects who believe they are better than everyone else. These panjandrums discussed ways in which they believe our lives should be ordered.

The key topics for discussion this year were:
1. Geopolitical Realignments (aka Destroy Russia)
2. NATO Challenges (aka Destroy Russia)
3. China (aka Repression best practice)
4. Indo-Pacific Realignment (aka Belated panic about Chinese irredentism)
5. Sino-US Tech Competition (aka Sino-US Tech collaboration)
6. Russia (aka Destroy Russia)
7. Continuity of Government and the Economy (aka How to achieve One World Government)
8. Disruption of the Global Financial System (aka How to introduce a digital currency)
9. Disinformation (aka More Censorship and social control)
10. Energy Security and Sustainability (aka Introducing individual carbon credits)
11. Post Pandemic Health (aka More medical tyranny)
12. Fragmentation of Democratic Societies (aka How to achieve One World Government)
13. Trade and Deglobalisation (aka Ways to disrupt supply chains)
14. Ukraine (aka Destroy Russia)

Note that among the issues not considered were buttressing the best features of Western civilisation, and food security.

The Bilderberg Steering Committee includes Left-wing Georgia Democratic gubernatorial candidate Stacey Abrams, who received $52,000 from a controversial foundation which has a history of doling out millions to those who wish to defund the police and believe that racism is a feature of capitalism.

The ubiquitous Mark Carney, former Bank of England Governor, ex-Goldman Sachs and now financial facilitator of eco-flummery, is a Committee member, as is José Manuel Barroso, President of the EU Commission from 2004 to 2014. This arch-Eurocrat was in office when the role of Goldman Sachs in the illegal bail-out of Greece before its entry into the eurozone was being investigated. No significant action was taken against Goldman. Barroso is now Chairman of Goldman Sachs International.

Another Goldman alumnus and Steering Committee member is Paul Achleitner. As well as being the treasurer of the Bilderberg Meetings he is chairman of the Deutsche Bank’s Supervisory Board. This scandal-riddled bank was raided once again in April, this time on suspicion of being involved in money laundering.

The Norwegian Børge Brende is there. Brende is President of the World Economic Forum and it would be strange if those bloodsuckers were not involved.

The Danish eco-loon Connie Hedegaard is another Steering Committee member. She was the European Commissioner for Climate Action before becoming chairman of the KR Foundation which promotes projects ‘that help show the way towards sustainable societies’ . . . i.e. yet another ‘philanthropic’ organisation that wants to destroy our way of life.

Censorship expert and Google President Eric Schmidt is also on the Committee.

The British contingent at the meeting included the increasingly erratic schemer Michael Gove MP, the half-French remoaner and arch trimmer Tom Tugendhat MP, and the towering intellectual David Lammy MP. Lammy will forever be remembered for his appearance on Celebrity Mastermind (Celebrity?) when he answered that Marie Antoinette had received the Nobel Prize in Physics and that Henry VII succeeded Henry VIII.

Lord (Mark) Sedwill was an attendee. The former Cabinet Secretary is now an investment banker with Rothschild & Co and a director of Lloyd’s of London.

Among the many individuals concerned with monitoring the populace there was Jeremy Fleming, Director of British Government Communications Headquarters, GCHQ. At GCHQ, Fleming has overseen the creation of the National Cyber Security Centre with a mission ‘to make the UK the safest place to live and do business online’ but which no doubt has already infiltrated your router. Jen Easterly, Director of the USA Cybersecurity and Infrastructure Security Agency, was also present,as wasKyriakos Pierrakakis, the Greek Minister of Digital Governance.

The thoroughly unpleasant Covid tyrant Chrystia Freeland, Deputy Prime Minister of the Totalitarian Wokeland that was once the great Dominion of Canada, was present. Freeland, whose grandfather was a Nazi collaborator, was photographed holding a scarf bearing the colours and slogan associated with a far-Right Ukrainian paramilitary group from the Second World War at a march in solidarity with Ukraine in Toronto on February 27.

Of the others attending there was Henry Kissinger, who wrote in a memo to Jimmy Carter’s National Security Council’s Ad Hoc Group on Population Policy that ‘depopulation should be the highest priority of US foreign policy towards the Third World’. Albert Bourla of Pfizer and Emma Walmsley of GSK provided a Big Pharma presence.

Acting through the WEF, the Club of Rome, the Trilateral Commission, Bilderberg, NGOs and multifarious ‘philanthropic’ foundations, billionaire globalist technocrats and their drones have used the Eastern European war, the chimera of a pandemic and the increasingly farcical ‘climate emergency’ to crush the minimal democracy we enjoyed.

It is an outrage that from the treacherous trio of UK Parliamentarians who have been consorting with foreign powers we will hear nothing.