This terrible, and inevitable, attack on Jews 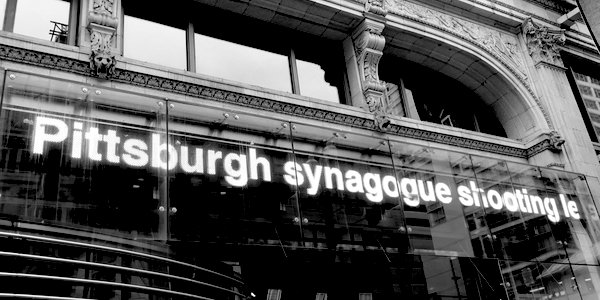 Nothing more and nothing less than unadulterated anti-Semitism motivated the mass killing at a Pittsburgh synagogue on Saturday.

To try, as some already have, to make political capital out this heinous crime is opportunistic and inappropriate. Those who do so need to recalibrate their moral compass. This shooting is not about immigration policies, Donald Trump or Muslims. It’s about hatred of Jews. It happened when Jews came together to pray on Shabbat (the Jewish Sabbath) and to celebrate the naming of a new baby girl. Jews should be safe in places of worship but they are not. At this Shabbat service 11 were murdered and six were injured.

Our focus should be on mourning for the dead and praying for the injured. Anything else diminishes the impact of this attack and does a disservice to the victims. It turns their plight into a political crusade rather than what it really is – anti-Semitism – the most virulent and obstinate form of hatred which refuses to go away. If not contained and fought against, anti-Semitism spreads. And its effects are deadly.

I too had a baby-naming ceremony, as most Jewish baby girls do. In the synagogue my father would have stood on the bimah (podium) and held me in his arms while the rabbi announced my Hebrew and English name to the congregation. Both were chosen in honour of my deceased grandmother.

The baby-naming ceremony is a spiritually powerful time. The name given to the baby bestows an identity and the Hebrew name binds the baby to her ancestors and to God. How utterly spiritually and emotionally devastating it must for the family of the baby whose naming ceremony was shattered last Shabbat in what is now a synagogue of mourning.

Our places of worship are, and should be, sanctuaries. But most synagogues around the world require considerable security protection. It’s a damning indictment of society that Jews need so much protection to be safe while attending synagogues. Otherwise they risk losing their lives. It’s an unspeakable outrage that anyone should be burdened by fear while praying.

As a shy child I found that visiting the synagogue imbued me with a rare feeling of joy, safety and belonging. Even a regular Shabbat service felt like a great occasion. My father would carefully wrap his tallit (prayer shawl) into an embroidered velvet bag, my mother would wear her best shoes and my sister and I our prettiest dresses. Our South African synagogue seated thousands. Upon arrival the lone security guard would greet us with a nod and my sister and I would follow my mother up the stairs to the women’s section while my father went to the men’s section. Sadly that same synagogue is now barricaded with bollards and the security men are armed with AK47 machine guns.

I was never bored in our synagogue. In between praying I would stare at the extravagant hats some women wore to cover their heads. During a lull in the service my sister and I would wave frantically at my father to get his attention. Attending the synagogue on Shabbat is a spiritual duty and a social event. At my childhood synagogue friends caught up on gossip and teenagers congregated outside in small gangs, eyeing each other up.

Occasionally, during the service, the rabbi would bang his fist on the lectern table and scold the congregation for talking too much. A hush would quickly descend and then a few minutes later his protestations would be forgotten. But when the choir sang their traditional Shabbat prayers and hymns all chatting would stop, and we would sing together, even those like myself not blessed with a good singing voice. And then it would be as if the entire outside world melted away and all that mattered was our connection to God, our heritage and each other.

When I learned of the shootings on Shabbat I was angry but not shocked. Anti-Semitism is now so ingrained and normalised that this was sadly inevitable. And that, as well as mourning for the dead, made me weep.