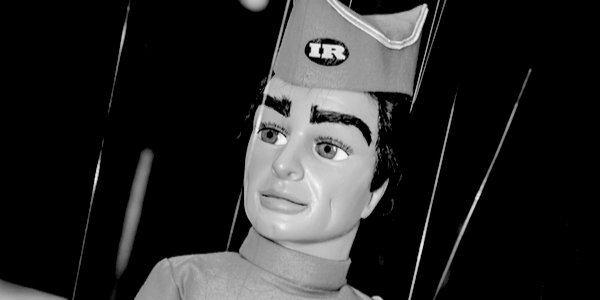 IN a TCW article last week, Laura Perrins told how the long-running Terminator film franchise has fallen victim to the modern Hollywood trend of inserting right-on, politically-correct causes and characters into the storylines of many movies.

The latest offering in the cyborg saga, Terminator: Dark Fate, has a jarring anti-maternal ‘kill all the men’ feminist theme – which, says Laura, makes the movie ‘garbage’.

But will we see more science fiction favourites undergoing this woefully woke and ‘progressive’ treatment?

How about Luke Skywalker demanding a paternity test from Darth Vader in Star Wars? Bounty hunters in Blade Runner facing Replicant Rights protesters? Or Health and Safety killjoys banning Marty McFly’s self-lacing shoes in Back to the Future?

And what about Thunderbirds, the 1960s ITV puppet series which transferred to the big screen – with human actors – in 2004? Well, for the disaster-fighting heroes of International Rescue, it seems a modern makeover is already on the way, as a leaked studio synopsis reveals …

It’s 2060, 40 years since eco-warriors sensationally seized power in Britain by towing a melting iceberg full of polar bears up the Thames, then releasing the bears into Parliament to chase away Brexit-squabbling MPs.

The coup has turned the country into a carbon-neutral dystopia of turbines and tofu, ruled by a coalition of climate campaigners, food faddists, feminists and Lefty lobby groups.

But there are still pockets of diehard deniers. So the coalition has nationalised International Rescue and renamed it International Arrest-You. Staffed by the all-female Tracy astronaut family, it’s been ordered to hunt down dissidents with its Thunderbirds rocket ships … now known as Thunbergbirds.

As a klaxon blares in the control room on Tracy Island, operations commander and family matriarch Jacinta Tracy asks: ‘What’s the emergency?’ From a spy-in-the-sky space station 200 miles above Earth, her daughter Alana reports: ‘Someone has broken SWEAT!’

Minutes later, another Tracy daughter, Virgilina, blasts off in the bulbous green rocket ship as Jacinta announces: ‘Thunbergbirds are go!’

Virgilina soars through empty skies, from which all other aircraft have long been banned. ‘Target in sight,’ she reports. ‘Now remind me, what the heck is this SWEAT that’s been broken?’

Alana tells her: ‘It’s Eco-Law No. 23, entitled Stop Warming England’s Ambient Temperature, passed in 2020. It made contributing to global warming a major crime.’

‘Okay,’ says Virgilina as Thunbergbird 2’s thermal sensors home in on the heat source 500ft below … and reveal a burly bloke furtively guzzling a piping-hot Cornish pasty. His steaming savoury has raised the local air temperature by a trillionth of a degree, easily enough to get him into hot water with the law.

‘He’s also in breach of CHOMP,’ Alana tells her.

‘Of course – I remember now,’ says Virgilina. ‘But I must admit I still miss sausage rolls. And as for steak and kidney pudding …’

‘Now, slowly place the pasty on the pavement and step away from it. Put your hands in the air and make no sudden movements. Do not wipe crumbs or gravy from your mouth!’

He does as he’s told. However, he knows he faces a sentence of hard labour – chipping away with a pickaxe at the mile-high glacier that’s been creeping south across Britain since the eco-revolution began (Scotland has long been buried and the ice recently demolished Hadrian’s Wall). So he legs it.

The fragrant Lord (formerly Lady) Penelope, with his faithful driver Parker, is the Tracys’ special agent. But when Virgilina gets through to him, he has bad news.

‘Sorry, dahling, but my pink Rolls-Royce, FAB 1, has run out of electricity,’ he says. ‘I’m plugged into a charger at South Mimms Services, but it’ll be at least 12 hours before I can move. And poor old Parker isn’t with me. She’s in hospital after being bitten by one of those timber wolves that have been let loose in Hyde Eco-Park to re-wild it. It’s all rather tiresome.’

But over the radio comes a bombshell. ‘The Eco-Inspectorate has just sent us our latest emission results,’ says Jacinta. ‘International Arrest-You is grounded!’

‘It’s not the rocket ships,’ Jacinta tells her. ‘It’s us. Apparently we Tracys have developed irreversible hereditary body odour from being in our sweaty spacesuits all the time. Our pongy perspiration is sending global carbon readings off the scale.’

‘So it means …’ gasps Virgilina.

‘I’m afraid so,’ says Jacinta. ‘It means … Thunbergbirds are gone!’