NewsPaperthe art of publishing
HomeNewsTier One Military Power? Not with this underfunding
29

Tier One Military Power? Not with this underfunding 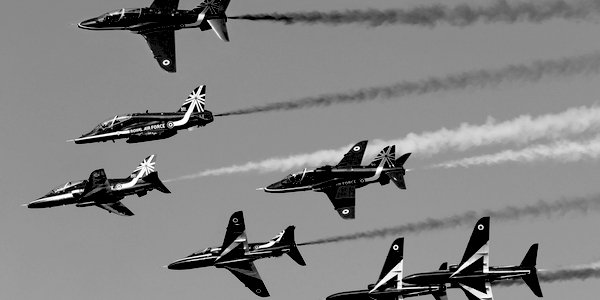 At a Spectator/BAe Systems event this week to mark the centenary of the RAF, Mark Francois MP, a member of the defence select committee, stated that there was an (unfunded) aspiration to increase defence spending to 3 per cent of GDP – which would be a 50 per cent increase. It’s a darn shame that Mrs May decided to throw £20billion at the NHS instead.

Consider this. BAe is a world-leading defence and aerospace company, which is why it is a 15 per cent partner in the F-35 fighter programme (currently 3,000 aircraft at £100million a pop, so income to BAe of £45billion). When it (and the MoD) get it right, UK plc makes money. For example, the Hawk (a training jet flown by the Red Arrows) cost the UK £900million. Overseas sales came in at £11billion. If our dullard Prime Minister had spent the £20billion on defence, much of that would have been on equipment, much of which would have led to further export sales. These in turn would have generated additional tax revenues through jobs and profits.

And let’s not get hung up on being in the arms trade; buyers will always find products from us, France, Russia or the US. In any sensible world it is preferable for us to be providing arms, because with that goes influence and control.

But it’s worse than that. There was a ten-year gap between the end of building the Vanguard class submarines and building the Astutes. During the decade of idleness the design and production capability was lost. The skilled team which had been designing and building submarines for 60 years broke up and left. Which is what highly skilled engineers and managers do: if there is no work at company A they are hired by company B. In the words of Ian Waddell, general secretary of the Confederation of Shipbuilding and Engineering Unions, ‘we forgot how to build submarines’. This is one of the main reasons that the Astutes were late, over budget and are having problems.

Then it was revealed that for the first time since World War 2 the RAF has no one at work designing the next combat aircraft, the F-35 having moved from design to production. No prizes for guessing what will happen to the BAe team (so good that they got 15 per cent of the work in a programme where the RAF is buying much less than 15 per cent of the anticipated production run) if there isn’t work for them.

And I read in the Financial Times that Mrs May is questioning whether we are a Tier One military power. We probably are, just about – it’s a low baseline, though, as there are few top-notch armed forces.

So, we have a defence industry approaching crisis, a select committee that recognises a need to increase defence spending and a benighted PM who wants to throw money she doesn’t have into the financial black hole of the NHS – presumably to divert attention from the fact that, two years after the Brexit vote, we still don’t have a credible plan for ‘no deal’ (without which we have no chance of ever securing a decent deal, as anyone with any commercial experience knows).

Mrs May is getting the blame because she is PM. But the stark truth is that from defence via health to Brexit and finance, the entire system of government in this country is not fit for purpose. I don’t want change, I demand improvement, but at the moment I can’t see any political party being able to deliver. It’s going to be a long, hot summer.