Time to kick the Zoom habit 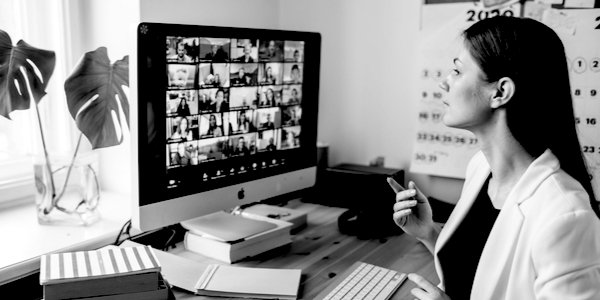 A BIRTHDAY tea with four friends last month was almost like old times, although of course in the past we’d have been inside, not out there in our thermals, anoraks and hats. At 5pm we all rushed off to a Zoom meeting. An hour later we sat at our screens and saw exactly the same faces again. That strange hall of mirrors is now part of our lives, creating national catchphrases: ‘You’re muted!’ ‘Yes, we can see you!’ and more fantastically, ‘Do you mind if I change my background?’

‘Zoom Video Communications’ has a market value of £85billion and its Chinese founder is worth almost as much. Nearly two million Britons were Zooming daily by late last year, entering virtual meetings for work, clubs, book groups, yoga, political gatherings, life painting, church meetings, auditions, rehearsals, choirs, academic lectures and seeing family and friends. For some it was their only chance to see their grandchildren.

Zoom has changed our manners and introduced new anxieties. The basic courtesy of saying ‘Hello’ when someone arrives seemed to go, and apart from family meet-ups, it put an end to all small talk and exposed the inability of most people to make their point concisely. Zoom offers a blatherskite’s charter as it is remarkably hard to stop someone on screen once they’re in full flow. The hand signal can be too easily ignored.

All those faces looking back can also be dispiriting; according to the Economist magazine, the rise of video-conferencing during the pandemic has caused ‘Zoom face envy’ as well as ‘face-dysmorphia’ as we now spend hours staring at our own faces and, inevitably, comparing them with others. Poor lighting and the skewed angles of laptop cameras are rarely flattering. The American Academy of Facial Plastic and Reconstructive Surgery reckons that ‘lockdown face’ has created a ten per cent increase in cosmetic surgery countrywide. In France, despite limits on elective procedures during the pandemic, plastic surgery is up by nearly 20 per cent.

I think I look better than usual on Zoom, bathed in a soft golden light. My anxiety is performance-based. After I’d got over my initial worry about the technology, I became afraid of missing meetings. If you have more than two a day you have to start putting them down in the diary. Some cruelly send their links very late, or they get lost among other emails. ‘The missing link’ previously perplexing 19th century anthropologists took on a new meaning.

Life is now returning to normal but, surprisingly, many people are extremely reluctant to relinquish their virtual lives in favour of the real thing, or they feel safer if the two remain in parallel. Zoom has become one of the essential structures of the day, replacing ones that were lost when we were all shut in. But I don’t wish to rely on it any longer. I no longer need to hide away and want to get back to where we were before all this post-bat-eating frenzy began. It’s dismaying to hear people say that they want to carry on with life as it now is, on Zoom.

My art group seems particularly reluctant to revert. ‘But we can get models here from all over the world,’ they say, as we paint girls from Brazil and Portugal and a youth in South Africa who can stand on his head. I want to get back to using local life models with all their lumpy strangeness, lateness, intransigence and tantrums. It will also be a relief to be able to paint people in natural daylight again, rather than studio light filtered through a mobile.

This reluctance to relinquish Zoom is down to British reticence, that natural tendency towards shyness if not agoraphobia. ‘An Englishman’s home is his castle,’ as it used to be termed proudly. That reluctance to engage with others and indolence are fusing dangerously; holding meetings in your pyjamas, or without any clothes at all if you keep your camera off, is all very well, but we need to break out of this app-induced sloth and get back to real life with all its external challenges.

This is also about protecting jobs in the long-term. Managers and HR teams are reducing costs and cutting staff benefits while increasing their workloads. Can people sitting at home really have any powerful voice with employers whom they never meet face to face?

If our parents could return to a new normal after the trauma of World War II, picking up the threads of their old lives and starting new ones, creating an economic boom and a more equitable society, we also have to find the will and stamina to do the same – but who will be the first to quit Zoom?