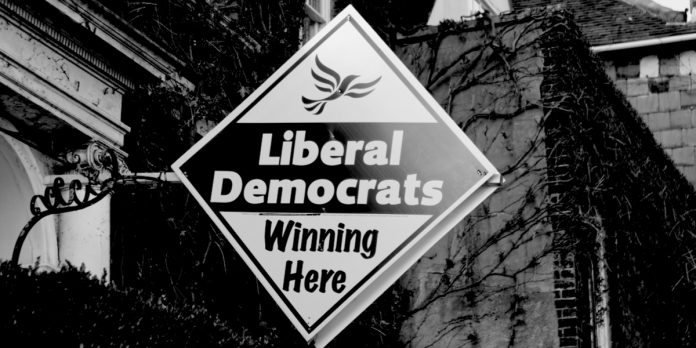 With the seismic seizing of Tiverton and Honiton from the Conservatives, the Liberal Democrats are riding high in the polls. TCWDF sent our political correspondent to interview leader Sir Ed Davey.

In the middle of this celebration is Sir Ed Davey, clearly revelling in the epoch-changing victory that he has orchestrated single-handed. He waves me over and shows me into his office.

Sir Ed cannot hide his delight at how his party performed.

‘What a great day to wake up to in Britain,’ he exclaims. ‘The Lib Dems were the party of the future but now we are the party of the present.’ He takes a gulp of coffee from an oversized mug which has a motif of a brown trilby hat.

Casually dressed in fawn moleskin trousers and a Tattersall shirt with the top three buttons undone, he looks at ease and triumphant. Sir Ed’s chest is admirably hirsute, and he sports a small gold chain round his neck from which hangs a St Christopher.

I start by asking him to what he attributes his party’s electoral success.

‘Dedication, as the late great Roy Castle used to sing. It is the dedication and commitment of many hundreds of Lib Dem volunteers up and down the country that has won us this long-overdue recognition from the electorate. An electorate, it must be said, who are heartily fed up with Partygate, Beergate and all the other shenanigans that have gone on with the other parties.

‘Quite simply, voters up and down the land want a change for the better and this is what the Lib Dems offer. We are the party of hope, the party of trust and above all the party of sound fiscal policy. The current financial hardships can be directly laid at the Government’s door. The lack of help for struggling families, is in our opinion, one of the greatest stains on society.’

I ask him how the Liberal Democrat policies garnered so many votes.

‘That’s simple – at the heart of everything we do, we have a picture in our mind of what a potential and actual Liberal Democrat wants, a picture of how every carefully crafted policy will resonate with these core individuals. This shows we are laser-focused on vital topics.’

I am interested in how this has worked in the run-up to Tiverton and Honiton.

‘An example that I can think of straight away that exemplifies how we captured the zeitgeist was “One rasher’s a smasher”, a terrifically well-researched and expertly delivered campaign that was born out of many focus groups, and it had a clear and easily understandable message at its core. One rasher of bacon a week is plenty for one person, people must get used to eating less meat if we are to achieve our carbon neutral goals. This was going to be followed up with “Be a man and don’t eat lamb” until it was quite rightly pointed out that it was neither gender neutral nor inclusive. Our creative boffins are busy working on some other targeted campaigns, and I have heard on the grapevine that “Be lean and keen, eat an aubergine” and ‘Gender queer – eat matar paneer’ have both researched particularly strongly.

‘One other area that we drilled down on was the urgent need to cut down on overseas holidays, which are contributing to the planet’s destruction. Why individuals still feel it necessary to go abroad is quite frankly unfathomable – society must wake up to its obligations – we cannot go on destroying Mother Earth. We launched our hard-hitting eco-tourism campaign under the catchy ‘Save the planet – go to Thanet’ banner.

‘This garnered a huge amount of complimentary media coverage and illustrated for many just how relevant the Lib Dems are. Not only that, but we have heard anecdotal evidence of a substantial economic uplift for Birchington-on-Sea and even places as far afield as Broadstairs. It is perhaps relevant to point out that these home-grown hot spots are accessible on one full charge of an average-sized electric car.’

I finish our all-too-brief meeting by asking about the Lib Dem approach to energy, and how they square carbon neutral with keeping the lights on.

‘Quite frankly this issue should have been put to bed years ago. Renewables, renewables and one more time, renewables. Wind, wave and solar power are there simply waiting to be taken, and it is truly lamentable that successive governments have failed to grasp this. Endless sunshine, waves crashing around our shores and wind blowing freely, all this clean energy that we can tap into is a bountiful resource that can be harnessed at little or no cost. We have two catchphrases in research that we feel will be extremely helpful.’

Sir Ed stands up and from behind his desk produces a large whiteboard on which is written:

Feeling frozen, put on some loden

House like an ice box, pop on some socks

He stands proudly by his desk smiling from ear to ear, revelling in success.

‘We are on course to make the UK a far better, happier, more tolerant, diverse, welcoming, inclusive, questioning, gender neutral society, and it is my intention to have the Lib Dems shape this Shangri-La – come join us on this magnificent journey.’

With that he thrusts a membership application form into my hand, turns on his heel and whistles the 1966 hit for Napoleon XIV, They’re coming to take me away, Ha-Haaa! As he leaves the room.

Share
Facebook
Twitter
WhatsApp
Email
Previous articleKaliningrad – prodding the Russian bear a step too far?
Next articleBMJ editor: Covid vaccines more likely to put you in hospital than keep you out