Tolerance – the gateway drug to every evil 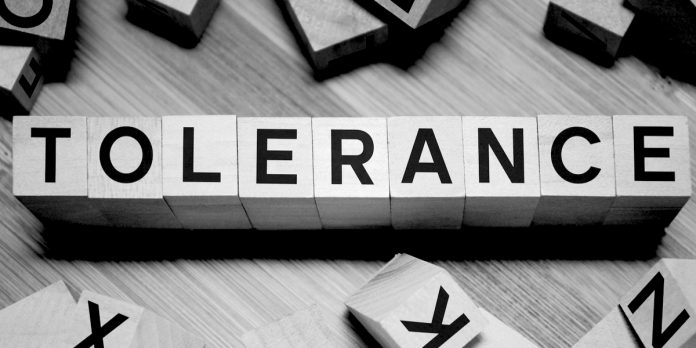 TOLERANCE is not a virtue. It once meant to ‘endure, to forbear’ – which reduces to ‘putting up with bad things’. Consider, then, what an ‘intolerant bigot’ might be. That would be someone who refuses to put up with what he knows to be wrong.

Modern definitions reduce the meaning of tolerance to perspective. It’s simply ‘sympathy or indulgence for beliefs or practices differing from or conflicting with one’s own’.

This is the kind of ‘my truth, my reality’ postmodern trash we can expect from a system of values which celebrates degradation. Tolerance in its meaning, its practice and in its function is utterly corrupted and corrupting. It was understood as enduring, then later, as restraining from responding. It is now an obligation, because that which must be endured is everywhere, and there is no end to the putting up with things.

Far from being a positive trait, it is a wholly negative concept which reduces to a compulsion to submit to everything which offends common decency. Tolerance is the virtue of vice.

Tolerance, like so many popular buzzwords, has expanded to a broader common perception. To be tolerant these days is not merely to permit, but to celebrate that which we know to be wrong.

There is a strong argument to be made that Western values derive from those of Christianity, and that the secular West is a continuation of it – without God. In His place, we have put Man. Tolerance is one idea that does not come from Christianity. Where does it come from?

With the increase in difference in society, factionalism increased between races, men and women, creeds and lifestyles. These identities have incompatible goals and values. As society fractures, something is required to prevent open conflict.

That something is tolerance. Yet it has an earlier provenance than the emergent multiculturalism of the 1950s and 1960s. Tolerance is a Masonic principle. It was avowed by the self-styled ‘scientific illuminists’ as early as the 18th century, by Locke in the 17th century and promoted by humanists such as Bertrand Russell in the early 20th century.

These people believed that Reason would make Man free and wise, once the shackles of morality and religion were removed. Theirs was the Liberalism of taking liberties. The wreckage made of the world by the removal of restraint on the self, by the wholesale destruction of common sense, and the deliberate inversion of vice to virtue is the reason that tolerance is required. It is the only social glue remaining which can hold together the shards of society. This is the result of replacing God with Man.

What tolerance has wrought is the celebration of terrible ideas. It is degenerative, replacing instinct and judgement with unilateral disarmament. It is to enter a conversation without the power of speech. Tolerance tells you to put up – and shut up – and then to salute its flag.

Tolerance preaches against common sense, and against basic animal instinct. It will instruct you to disbelieve your own eyes, your senses, and the reflexes which preserve life from danger and from disease.

Tolerance is now an obligation – not a choice – because of the mess made of society by its managers.

Here is a list of wrongs to be tolerated:

The valorisation of vice as virtue

Being locked up and made bankrupt over a non-serious virus

Open borders and your replacement

Soaring crime due to social collapse

Ever higher prices and taxes

Lies and misdirection from the media

The aggressive promotion of addiction

A pointless war with Russia and perhaps with China too

The complete collapse of the Western way of life

Tolerance is a command to the normal and the lawful. If you are a degenerate, a foreigner with no right to be here, a criminal, a rapist, a child molester, a groomer, a burglar, a street thief, if you are a corrupt public official, a lying politician, a member of the scum media – tolerance is legally enforced for your protection. Tolerance enables a two-tier society, where the majority are legally sanctioned and the minorities given licence. This is a zero-sum game, meaning one side’s win is a loss for the other. Why is this wicked notion so prevalent?

Tolerance is a necessary evil – to protect evil. The fact that it is seen as the utmost virtue is a sign of the debasement of our values. If you were told to your face that you must obey when instructed to applaud these vices, these injuries and insults, you would laugh at the sheer insanity of the idea. Yet I fear that many readers will feel that little lurch of guilt at the mere suggestion of revoking tolerance, because it is the crown of all the sicknesses and sins that we call goodness today.

Karl Popper wrote a book in 1962, The Open Society and its Enemies, about people like him versus people like me – and you. He warned that there were limits to tolerance. Can you guess what they were? Did he mean that there were things we should not tolerate because they are wrong, destructive, wicked?

‘Lolno’, as intellectuals like to say. Of course he meant that the intolerant should not be tolerated. A child of five could probably point out the paradox here, but it did not stop Popper.

‘If we extend unlimited tolerance even to those who are intolerant, if we are not prepared to defend a tolerant society against the onslaught of the intolerant, then the tolerant will be destroyed, and tolerance with them.’

If you do not tolerate evil you are an enemy of the Open Society.

Everything you are commanded to tolerate benefits people who are not you. Tolerance is what is taught in the defence of the destruction of morality, of conscience, of the innocence of children. It is pushed to promote the destruction of your homeland by waves of men with no attachment nor love for you nor your country. It is to make you complicit in the devaluation of your wages, of your profession, of everything of value.

Tolerance is the magic word of the boiling frog, which teaches it to welcome the ever-hotter water. Say no to tolerance. It is the gateway drug to every evil. So, instead of putting up with everything, try putting down that burden and walk awhile without it.

A longer version of this piece is published at frankwright.substack.com