NewsPaperthe art of publishing
HomeNewsTom Gallagher: Hubristic Sturgeon turns a blind eye to the turmoil in...
8

Tom Gallagher: Hubristic Sturgeon turns a blind eye to the turmoil in her own backyard 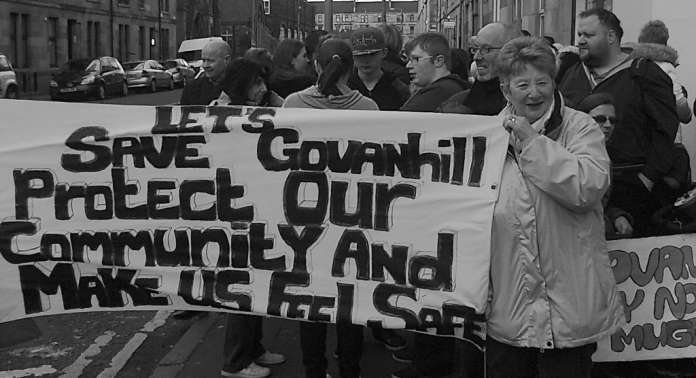 Near the south bank of the river Clyde, Govanhill could easily have been a mascot for a regenerated Glasgow. It’s not quite up there with Trastevere in Rome or Toronto or reborn Dresden. But speciality shops, good restaurants  and sturdy rows of Victorian tenement houses leading to beautiful Queens Park had long made it a magnet for aspirational Glaswegians.

On Easter Monday, I joined around one hundred locals who had gathered for a vigil on the spot where a 74-year-old pensioner had been brutally mugged and robbed the previous Friday. Many of them had worked hard and saved to buy a flat in a desirable area of the city. Now they found that not only had the value of their properties crashed but they were under lockdown afraid to venture into the streets, especially after nightfall.

Things started to go very wrong for the community almost a decade ago thanks to an abrupt shift in its ethnic make up. Scots, Pakistanis, Bangladeshis and Irish had lived fairly harmoniously together for over a generation. Each community had its quirks but basically nearly everyone adhered to the same rules for living and there were plenty of cross-ethnic friendships.

A hardcore element among several thousand gypsies or Roma, now nearly all from Romania, who have occupied poorer housing in the area, have so far been unwilling to abide by the rules for amicable urban living.

Large groups of men sometimes 20 or 30 standing on street corners until late at night create a forbidding atmosphere. Noise levels resulting from carousing late into the night add to strained nerves. Perhaps the biggest complaints have arisen from severe overcrowding. Rubbish piles up in streets and back courts. Rats and lice proliferate in an area once known for its tidy atmosphere.

The changed fortunes of the area are often traced back to a Faustian pact made between Glasgow City council and the Home Office which added a substantial sum to the city’s coffers through housing citizens from East European countries, which were full EU members after 2007. Financial retirement schemes for leading officials were safeguarded. But no funds were set aside to ensure that policing, educational, health and social care and cleansing services were strengthened to meet the daunting challenges in Govanhill.

Such elementary forward planning might have ensured that the initiative swung from Roma content to pursue a disorderly lifestyle in Britain to others who definitely wished to improve themselves and shake off a medieval heritage where life was dominated by arbitrary clan chiefs and stifling customs.

There has been a minimal response from the authorities. Remarkably Govanhill lies in Nicola Sturgeon’s own Glasgow Southside constituency. It might have been expected that, spotting the problems, Scotland’s First Minister might have wished to make it a showcase for effective governance by the ruling Nationalists.

Far from it. The SNP has used its clout over the media to discourage any serious reporting of the mounting problems in the area. The Scottish third sector, now heavily politicised, knows that the way to lose funding from Edinburgh is to make too much of a fuss over them.

Govanhill is a neat illustration of the fact that the SNP is not interested in rolling up its sleeves to tackle visible concrete problems, which it has the money and the powers to rectify. Instead, its leaders are fixated by campaigning and taking selfies while the next echelon of political fixers at council level are becoming heavily embroiled in patronage politics as their grip over town after town intensifies.

A high-profile opposition politician whose sister lives in the constituency remarked to me recently that she thought there was a real chance that Govanhill ‘would blow’ in the next 5 years because of the utter neglect shown by the authorities to its plight.

Perhaps the only good thing the place has got going for it is the local action group ‘Let’s Save Govanhill’. It was set up by Fiona Jordan who taught in America and there saw what worked and didn’t work in terms of multi-racial living. Her 84-year-old mother can’t leave the area and so she tends her while tirelessly working to prevent meltdown.

Jordan has never framed the problem in ethnic terms, but sees it about the unravelling of the social and physical environment. She believes a regeneration project is needed involving the close cooperation of the Scottish government and the city council. She thinks it is possible for many Roma to adapt to Western cultural norms but far more has to be done in that regard.

But she faces entrenched multiculturalists in positions of authority, and among the influential Clydeside far left, who believe there is need for ‘cultural parity’ rather than the abandonment of traits which Marx might have summed up as part of ‘the idiocy of rural life’.

Pensioners and shopkeepers to whom I spoke echo Jordan’s words that ‘the police are dismissive of the attacks in our community’. A sign of their warped priorities and the degree of their politicisation is the fact that on three occasions over the winter, Jordan was visited by intelligence officers, an incredible misuse of their time.

The local campaigners got Sturgeon to receive a petition in a high-profile photo event in March 2015. But due to her inaction they have stepped up pressure, protesting outside the SNP national conference on two occasions. Sturgeon showed that she was rattled by refusing to take part in an electoral hustings that the campaign staged in a Govanhill backcourt on 19 March.

Growing numbers of people in Scotland are no longer mesmerised by rhetoric about the dark night of Thatcherism and the Conservative candidate Graham Hutchinson came over as very much in touch with some of the problems of the area, according to some in attendance.

Some self-styled progressives who extol radical multiculturalism but who run from sight when decision-makers preside over horribly botched experiments live not far from Govanhill, but the  area is an absolute taboo subject in their writing.

It is ironic that Sturgeon has forced through an Orwellian Act, which allows state officials to supersede parental rights even when children are adequately cared for. In Govanhill, the uncrowned queen of Scotland has behaved like a negligent parent towards an area to which she has a duty of care as a public representative. Such hubris could hasten the downfall of  a party now riding high, but which has done little to earn support which welled up during the emotive 2014 referendum campaign on Scottish independence.

The number of cars which tooted their horns in appreciation as they drove past those on the Govanhill vigil suggests that some day soon the SNP will face a reckoning for its reckless neglect of what should be a thriving Glasgow community.

Tom Gallagher is a political scientist and the author of Scotland Now: A Warning to the World, (Scotview Publications 2016).