NewsPaperthe art of publishing
HomeNewsTom Gallagher's Christmas book choice: They don’t write them like that any...
22

Tom Gallagher’s Christmas book choice: They don’t write them like that any more 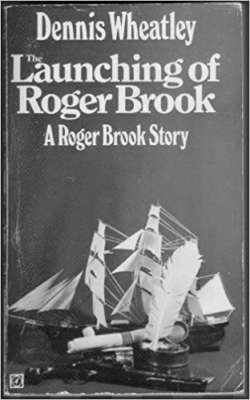 The Launching of Roger Brook

It is quite a leap from the decisive, self-possessed young characters in the novels of Dennis Wheatley to the soppy, self-absorbed and suggestible youth who are promoted as role models in today’s Britain.

Bold youngsters, both male and female, use their wits to triumph over villainy of different sorts against a background of international crisis and intrigue. They are driven by emotional passion, the desire to seek fame and fortune but also by honour and duty to their country. They are often entangled in complicated situations that show how capricious life can be – and how the struggle for existence is impossible to reduce to any theory or dogma.

Wheatley believed in hierarchy and order, but he was no apologist for ruling elites. Some of the most bone-headed or unsavoury characters in his historical novels spring from the ranks of the privileged. But it is the forces of anarchy or ideologies packaged as panaceas for the world’s ills which are singled out as posing the main threat to the continuation of any kind of civilised order.

I’d place a copy of The Launching of Roger Brook in the hands of any promising teenager who deserved to avoid being university liberal arts fodder and a lowly cog in a leviathan state. It is the first of a series of twelve books relating the adventures of this young Englishman in Europe over a thirty-year period marked by the French Revolution and the Napoleonic wars. It went into six editions when it first appeared in 1947 and helped to turn Wheatley into one of the top best-selling fiction writers for the next twenty years.

Readers are introduced to Brook as a restless teenager of independent mind who is not yet sixteen. He dislikes being ordered around, which would have been his life if he had obeyed his father and followed him into the Navy. Instead he leaves the then village of Lymington in Hampshire to set out for London, only for fate to intervene and pre-revolutionary France to become his new home.

As in many of his novels, Wheatley offers an absorbing portrait of the societies in which his main characters duel with destiny. He describes a desperately ill-governed country in which it is not just the peasantry who are weighed down by numerous absurd and oppressive practices. Thanks to being absorbed in the vast wasteful court of Versailles, the nobility are impotent. But they are exempt from taxation and instead it is the popular classes whom an army of bureaucrats and tax-collectors prey upon.

The young Brook is saved from the galleys, penury and imminent death by his own thirst for survival as well as several decent characters who befriend him or recognise that he can be of use to them. They spot his qualities and help give him a foothold in French society. His self-assurance and his ability to master languages secures him a position as a lawyer’s clerk in a provincial town. He is involved in duels, elopements, chases by land and sea. He encounters real historical characters such as Fouche, the prototype for the modern secret police chief, and the more benign but slippery Talleyrand, still a model for sinuous diplomacy.

Wheatley had wished to set his novels in the period of the Second World War. He had been high up on Churchill’s staff, offering advice on sensitive intelligence matters. He would surely have known, or met, plenty of intrepid young men like Roger Brook. It was an epoch when Britain was fighting for its very existence so there was an outlet for their energies and daring. But he was dissuaded from using a contemporary setting for his novels and instead placed them in an earlier epoch.

Britain faced mortal danger from the Continent and there were opportunities for bold individuals to display their mettle. The young Roger disguises his nationality, knowing that an Englishman would attract suspicion even if France and Britain were then at peace. The ambitious noble into whose service he has entered brings him to Paris to act as his secretary. Count Rochambeau is plotting to weaken England by extending French sway over the Low Countries.

His secretary quietly seeks to thwart his machinations. He has retained not only an allegiance to Britain but a loose attachment to the Protestant religion. But matters become complicated when he falls deeply in love with his employer’s daughter, Athenais. She is beautiful, spirited but limited in outlook due to an unsatisfactory upbringing. Mutual love blossoms only slowly and the emotional dimension of this tale is wonderfully put together by Wheatley.

The Launching of Roger Brook succeeds on different levels as a love story, a tale of espionage, and as social and political history. Unfortunately few such novels are being written any more. Often the emphasis is on self-absorbed accounts of middle-class angst on a very limited canvas.

Roger’s emotional entanglements and his high-pressured job do not prevent him seeing the degree to which France is perched on the edge of a volcano about to blow.

A revealing passage brings home the differences between France and Britain.

‘He came from a country where there were still very real class distinctions, but in which there had grown up during the centuries a feeling that all classes were needed for a well-ordered society, and that each was worthy of respect from the other as long as in the main its preservatives contributed their quota to the common good . . . The humblest labourer would talk as an equal about the prospects of crop or village affairs with his landlord and the noblest in the land was not afraid to crack a joke with the yokels over a cup of ale in the village inn.’

But ‘here in France everything was utterly different. The country people lived in the direst poverty and were treated, not like human beings but like animals, by a stupid, hidebound, stony-hearted nobility . . . Even the townsfolk were a race apart, despising the peasants and in turn despised by the aristocracy. Owing to the decay of feudalism the whole system had become hideously false and distorted so that the links binding one class to another had now utterly disappeared, leaving gaping voids of hatred and envy where goodwill, trust and mutual service had once held sway.’

Historians (with a few exceptions such as Robert Tombs) would be very uncomfortable with describing Britain and France in these terms: revolution was avoided by the former only because her ruling class was more cunning or ruthless or because the more rapid pace of capitalist change meant that discontent was more easily dispersed than in France.

Wheatley has a sure grasp of psychology, and novels such as this one offer young people guidance about how to make their way in life and what dangers and temptations to avoid.

Roger Brook is larger than life, bold and resourceful while setting a high value on personal honour, but he is also prepared to be unscrupulous in situations where he considers such behaviour to be justified.

He has no illusions about the world. Barbarism is not far below the surface even in well-ordered societies where prudence and restraint have been cast overboard.

I don’t recall any of Dennis Wheatley’s fifty or more novels being a ‘Book at Bedtime’ or a ‘Book of the Week’ on the BBC. Not just the story lines but the politics and morality underpinning his writings would be too unsettling for most producers over the past fifty years. They would have to come with a public health warning.

If the current censoriousness sweeping Britain gave rise to outright book-burning, I suspect some of Wheatley’s books would be near the top of the pile.

As for a budding novelist like me seeking to use fiction to give a picture of current events and cultural trends, I find some of his best writing very stimulating. Someone who sold tens of millions of books in his prime may now be out of fashion (with only his occult novels being well known), but I would not hesitate to take his collected works to a desert island where I would have expectations of being kept absorbed for years.