Too late we see liberty lost: Our shackles are already forged 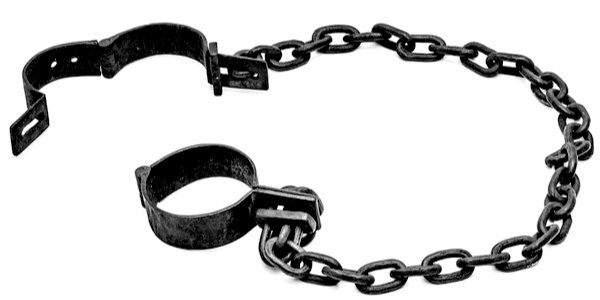 PENNIES appear to be dropping. Increasingly, people are seeing the patently obvious. Questions are being asked.

We’re on the cusp of taking another leap down the path of the debasement of our fundamental freedoms: Vaccine passports. The enabling excuse for this is a solitary death linked to the ‘Omicron variant’.

More see the absurdity of it: Threatening to shut down the economy once more on back of a lone death. What’s more, the Government has obfuscated whether the death was ‘with’ or ‘by’ this strain of Covid. Such reluctance to reveal the truth must mean it is another example of ‘with Covid’. The deceased might have been hit by a bus, for all we know.

‘Get your booster!’ each organ of state and media bellows. Doctors diverted, appointments postponed. Jab the young against a variant which might give them a sniffle and let the undiagnosed cancers wait a while. Cruelty does not begin to describe it.

Mandatory vaccination has been officially denied, so presumably it will be announced within the next 48 hours. Those reluctant to take the jab are insulted and increasingly maligned. ‘Make them suffer!’ comes the cry.

All of this is spurred on by a Prime Minister who cannot put his own house in order – ex-wives here, sprogs there – yet who is determined to play God, backed up by his chorus of needle-wielding fallen angels. King Cnut knew he could not hold back the tide, King Johnson displays no such humility.

His rise and fall will be one for the history books – a tragi-comedy of Shakespearean quality. Bent on attaining power at any cost, the second his deliberately-ruffled mop entered Downing Street, it all began to fall apart.

When put to the test, his carefully-constructed libertine persona crumbled away before the nation’s eyes, leaving behind a raggedy, dishevelled totalitarian willing to do the Devil’s work to maintain his hold on power.

Many are beginning to see the cost of abandoning fundamental rights and freedoms in a fit of panic. The precedent has been set. Almost two years of previously inconceivable interventions in the lives, rights and bodies of the citizenry cannot be wound back. A moment’s panic has unstitched the social contract.

The response to any future threat will be measured against this. Today’s go-to response has become what was previously inconceivable. One of the great lessons in history is that once a power is taken by the state, it is usually only ever wrestled back after a fight.

But many still want it. We are a society composed of those who can see no further than the end of their nose: Save me now, screw the consequences. We are witnessing the end effect of the mass indoctrination of the idiotic exhortation to ‘live in the moment’.

We live from one moment to another, with no eye on the horizon or on the bigger picture. We happily accept each lurch towards our own oppression, so long as it buys a moment’s security.

For many months, those who at every junction saw so clearly the erosion of our civil liberties and raised the alarm were ridiculed, libelled and slandered.

Following the pattern of modern political discourse, a slur was coined and hurled about with abandon. ‘Antivax’, ‘conspiracy theorist’. The former a baseless lie, the use of the latter merely signally one’s right thinking.

But too many of the erstwhile conspiracy theories have now become true. They cannot be brushed away so glibly. The mental effort required to see it as all necessary and justified grows exponentially by the day.

And so the pennies continue to drop. The damage, though, has already been done. I don’t believe we will ever be the same again. Rubicons are crossed almost daily. Our parliamentary democracy, already much degraded, has shown itself utterly impotent. There is no representation, only the clamour for more restrictions, more impositions. The blackmail will continue.

And when this ‘crisis’ passes and a future one arrives, we will soon realise that the groundwork for the next has already been laid. The cat is out the bag.

It is a fact of human history that only those who demand their freedom shall have it. For a society that once prided itself on its unextinguishable liberty, there appear very few willing to make such a demand.

Much like Johnson, once our carefully-constructed image of a freedom-loving people was put to the test, it turned straight to dust.