Top Gear and the bygone age of sodding about 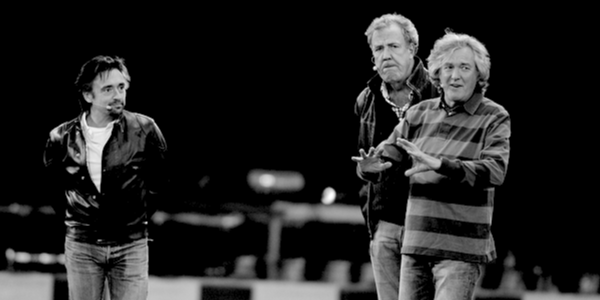 MANY men dream of owning a Ferrari or Lamborghini. Usually by the time they can afford one, however, they are in mid-life crisis territory and their sporty cabriolet is more likely to reward them with sunburnt bald patches than flocks of admiring damsels.

Me? I’m not like other guys. I want a Lada Niva, which you can see here. Yes, the design is practically unchanged since the 1970s, but it’s timeless. Or rather, frozen in time. It’s all a matter of perspective, I suppose.

0-60? You’d get bored with counting. Top speed? Enough. Cup holders? Yes, it got them a few years ago.

Sadly, like the Land Rover Discovery, it will soon bite the dust as it makes way for a modern iteration suffering from lookalike-itis, as is always the way.

In preparation for Lada ownership I have started watching a lot more car videos online. Some technical (I know a world more about crankshafts and oil sumps than I did a month ago, which was nothing), and some entertaining.

Inevitably, combining the words ‘entertainment’ and ‘car’ results in ‘Top Gear’. Suddenly my recommended videos are populated with the likes of ‘Making a Smoothie Using a Blender with a V8 Engine’, ‘Rolling A Reliant Robin‘ and ‘Quaint My Ride with Jeremy Clarkson’.

I watched Top Gear as a teenager. As is true for a large number of people, I watched it despite having very little interest in the cars. A Bugatti Veyron? I’m afraid it does nothing for me. I’ve always been much more of a Kübelwagen man.

And the show worked. Although irritating twerps, the three presenters had a good dynamic and the seemingly endless series of adventures, schemes and journeys they embarked on were famously entertaining. Gradually, though, I fell out of love with the show: watching middle-aged chaps messing around in increasingly scripted situations lost its lustre.

After lamping a producer in 2015, Clarkson was dropped by the BBC. No doubt they leapt at the opportunity of booting out someone so antithetical to the Corporation’s ‘values’, even though the show was one of the most successful in its history. Co-presenters Richard Hammond and James May left too.

In hindsight it was perhaps around that time when the sheer joylessness of modern culture began truly to take hold. Old episodes of Top Gear are from a different era, replete with unashamed blokeiness and politically incorrect jokes. Take the 2010 Top Gear Middle East Special, in which Clarkson and Hammond dress in burkas to avoid detection in Syria. Such antics would surely not be aired today (but it is still on YouTube).

It is not necessarily the political incorrectness that makes it such a joy to watch. It is hard to think of places where men can indulge in stereotypically male pursuits without the chastising of brainless prigs. What once came under the rubric of ‘sodding about’ is today a display of ‘white male privilege’. Oh, how humourless we have become.

This descent in puritanical void of humour is discernible in watching many of the classics of not-too-long-ago. Father Ted? The ‘lovely girls‘ competition and Ted’s Chinaman impression are more than enough for it to be memoryholed. The League of Gentlemen‘s someone-wearing-black-paint-on-their-face (note: not blackface)? The inquisition awaits. David Brent’s tactless questions in The Office? Prepare the guillotine.

There are plenty of reasons not to like Clarkson and Top Gear, though apparently he did thump Piers Morgan, which demonstrates a degree of good judgement. I also realise that there is a new version of the show running, featuring the deeply tedious Paddy McGuinness. I have not watched a great deal of it; I am not keen to consume BBC-approved agitprop.

Anyway, time to stop complaining. I’ve got a video to watch about how to install pistons into a cylinder. Who knows when such knowledge will come in handy when I have my Lada? According to most jokes the answer is ‘about 50 yards from the showroom’.

Nevertheless, by the time I’ve become a competent mechanic a degree of humour may have returned to the public square. I feel it’s going to take me a while.