NewsPaperthe art of publishing
HomeNewsTop of the G7 agenda? Gender equality, of course
97

Top of the G7 agenda? Gender equality, of course 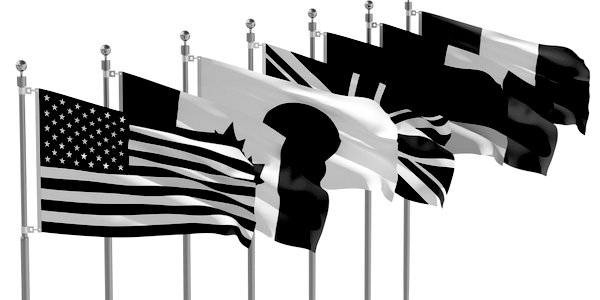 We are resigned these days to having well-paid jet-setters with grandiose titles from the UN and the Council of Europe buzzing around like bluebottles, telling us and our weary officials what we need to be doing about Grenfell, or the bedroom tax, or equality, or whatever. One of the advantages of the G7 is that it is different from these organisations; we have here a less pious and more informal grouping that concentrates on the business in hand and gets things done for the world economy.

The G7, 45 years old this year, grew out of a meeting of finance ministers set up in 1973 by George Shultz, then US Secretary of the Treasury, to work out a businesslike response to the oil crisis. Today it consists of the US, UK, Japan, Germany, Italy, Canada, France and the EU (I know that makes eight: just don’t ask). The presidency, which carries with it the hosting of the annual meeting, rotates.

For 2018 it has rotated to Canada, the country whose proud contribution to world history is (as pointed out on TCW last week) trumpeted by its prime minister as its ‘pan-cultural heritage’. The result you might have foreseen. Justin Trudeau, never one to miss a grandstanding opportunity, has insinuated into the G7 a ‘Gender Equality Advisory Council’, mandated to ‘promote a transformative G7 agenda and support leaders and ministers in ensuring that gender equality and gender-based analysis are integrated across all themes, activities and outcomes of Canada’s G7 Presidency’, and has promised to make gender equality a ‘central theme’ of Canada’s year in the sun. The members of this group are, as might be expected, a cross-section of the progressive great and good: Melinda Gates, Christine Lagarde, ex-EU Commissioner and advocate for sexual freedom and abortion Emma Bonino, plus assorted feminists and diversity activists largely from the academic and public sector.

This isn’t good news. There is plenty to talk about at the G7: Trump’s tariffs, Iran sanctions, North Korea, Islamic extremism, the transformation of employment; the list goes on. Although no doubt an academic thesis might plausibly connect any or all of these with women’s social and economic equality, gender parity is unlikely to provide the kind of immediate answer to what course of action is necessary that delegates can take away and sell to their governments and people. Time at this sort of conference is not unlimited. Yet, without a hint of irony, ‘experts’ (ie members of the Council) have demanded that talks about US tariffs cannot be allowed to overshadow the all-important discussions about women’s empowerment. Anyone looking at this other than through thick gender equality lenses might be forgiven for thinking that if we have a limited time to solve immediate problems, devoting hours of it to toe-curlingly dreary sermons from ineffably dreary people on gender equality (including, incidentally, equality of two-spirit and intersex people, whether men or women), is a curious way to use it.

It gets worse. The Council’s recommendations for Canada’s presidency, available here, make interesting reading. We can put aside some of the wackier assertions (I particularly like the throwaway line that ‘gender equality is the number one predictor of peace’) and the stuff that could have been written by a machine even though probably penned by a professor (‘We call for actions that recognize the diversity of girls and women, target multiple and intersecting forms of discrimination and disadvantage, stop the roll back of women’s rights, and leave no one behind’). The Council is demanding that the G7 under its tutelage require all sorts of commitments as to national foreign and social policy which ought to be left up to states and their electorates. On foreign policy, for example, not only must 0.7 per cent of all income go on foreign aid, but 20 per cent of that must be hypothecated to women’s groups; 50 per cent of funding to conflict-affected countries must go to women, peace and security activities; and (this could have come out of an Ealing comedy) gender advisers are to be integrated into the operational planning processes for all military forces.

And at home? Compulsory quotas on not only company boards but also at all managerial and executive levels; penalties for any private employer not achieving complete gender pay parity by 2030; non-transferable parental leave and ‘public education efforts’ (ie state bullying) to make sure men do 50 per cent of housework; ‘new and substantial financing’ for women’s rights organisations and movements (apparent translation: big, and guaranteed, subsidy from us taxpayers for organisations like Rosa and the Women’s Equality Party), and funding ‘gender-responsive health system strengthening’ (whatever that is).

And lastly, an ominous phrase: there must be a commitment to ‘recognize, reduce, and redistribute unpaid domestic and care services between families and the public sector . . . by investing in universal publicly-financed early childhood education and care services; and ensuring that businesses and not-for-profit organizations offering care services are well-regulated’. The translation is not hard. Get out to work, girls; it is the state, not the family, that should be looking after children, and no non-state organisation should be allowed to do this unless it is thoroughly approved by the state.

Neither the G7 nor any emanation of it has any business dictating matters of this sort to states; governments for their part have no business, whatever this Gender Equality Advisory Council may say, in agreeing with the G7 to commit their electorates to them. There are two ways of dealing with this kind of nonsense. One is to respond with polite indifference, go home and forget about it. The other is to take this self-important and fatuous body enormously seriously, in the hope that like Aesop’s frog it will inflate itself to grotesque proportions before exploding and leaving a damp forgotten residue on the river shore at La Malbaie. The latter might just be more effective. We shall have to wait and see.

Share
Facebook
Twitter
WhatsApp
Email
Previous articleWho but us would put up with these anti-English hypocrites?
Next articleAlas, poor Shakespeare – dead white males are such a waste of time