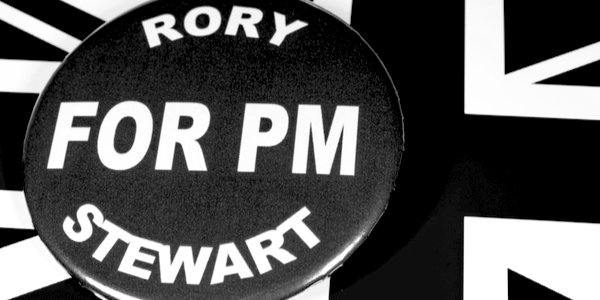 ROD Stewart MP (who pretends his name is Rory) finally reached the zenith of his own hot air, crashing out of the Tory leadership contest, falling off a cliff, facing the disaster of a no-deal exit without a Withdrawal Agreement.

Certainly, Tuesday’s second televised leadership debate could not have helped his cause. He promised ‘realism’ but offered defeatism. He criticised his colleagues for spin and bad manners, but was the biggest hypocrite on stage. He demanded radicalism, but offered nothing but continuity with Theresa May. He repeated his clichéd criticisms of the Party, but offered no solution except hope that he could attract voters from Left-wing parties.

Surely, his supporters should realise that his agonisingly attuned style is over-compensation for lack of substance, his intellectualism is fake, his humility is false, his conservatism is non-existent.

Save us from Rory Stewart, the fakest fake Conservative

Stewart thinks that walkabouts, accosting strangers for public conversations, tweeting, emoting, empathising and virtue-signalling are substitutes for policy. During the debate, Michael Gove pointed out that inclusiveness is not a policy for either social care or Brexit. A questioner from the Conservative Party told Stewart he was ‘completely out of touch’ on taxes and Brexit. Stewart learnt nothing: he sounded increasingly shallow and shrill. He betrayed yet more eccentricities – removing his tie during the debate and stretching into strange poses as if the agony of his competitors’ inferiorities was literally cramping his style.

John Redwood complained: ‘Stewart wishes to turn the contest into a re-run of the referendum in denial of the clear stance for Brexit all Conservatives put to the electorate in order to become MPs in 2017. He studiously avoided even contacting many Conservative MPs he knew to be committed to our 2017 promises, preferring to attract the support and good wishes of the media, especially the BBC, and sections of the general public wanting a second referendum.’

In the next day’s vote by MPs (the third round), Stewart was the only candidate to lose votes. How ironic that he once interpreted the second biggest jump in votes as meaning that he came second, and thus that only two candidates ‘can beat Boris – me and Boris himself’.

Yet Stewart did not learn from his own hubris. In Parliament he courted the journalists and ignored the politicians. He declared that he had won the backing of the ‘public’. He told ITV News that he had been undone by MPs who judged that the wider members ‘are not ready to hear’ his realism.

What next for Stewart? Appropriately, the same mainstream media that had inflated his bubble turned round to lance it. Nobody seems to think he has a future in the Conservative Party. A columnist at the Daily Telegraph, whose opinions have tended to both extremes on Rod, declared that ‘Rory has provided entertainment and bewilderment in equal measure, but ultimately his eclectic campaign was held back by the fact that it played far better outside the Tory Party than within it.’ In the second-stream media, one columnist called Stewart’s candidature an ‘aberration’. ‘What were Conservative MPs thinking about, indulging this natural candidate for membership of Change UK?’ https://reaction.life/rory-stewart-is-an-icon-of-the-infantilisation-of-politics/ The Spectator concluded that ‘his flip-floppy, hands-across-the-aisle approach is clearly part of a different strategy’ – becoming Speaker of the House.

Superficially, Rod has a future only with the Guardian newspaper. One columnist lamented that Stewart was out despite having ‘made the case for necessary taxation and spending’. Another wrote that Rod’s drop is a sign that the Conservative Party ‘has finally given up on reality’ (a paraphrase of Rod’s own campaigning). A third unwittingly revealed the Guardian’s own dissonance by criticising Stewart for not realising that Theresa May’s Withdrawal Agreement is dead, while agreeing that it is the only alternative to ‘no deal’ (WTO Brexit). With ‘frenemies’ like that, how can Rod Stewart’s unrealistic fake realism ever die?

However, Rod himself is preparing for his second coming with the Conservative Party. After the vote, he told a BBC interviewer that he hopes to form an anti-Johnson ‘team’ with Gove, even though Gove at that point was still in the race, and no teams were allowed.

Later in the same day, he tweeted his latest home video, posing stationary, one foot forward, with his tie returned, before walking towards the camera, removing that tie, thanking everybody for an ‘incredible campaign’, saying he is ‘not disappointed at all’, declaring that he has ‘uncovered something extraordinary’, inviting everybody to a big thank you and ‘continuing conversation’ party, and concluding that ‘Rory walks on’.

Who is the bigger prat – the one writing, directing, and producing this fakery or the lingering supporter who thinks Rod is the real thing? And who is the idiot donor who is paying for his party?

Stewart’s expulsion from the leadership race in 2019 might seem like a triumph for conservatism, but the Conservative Party is still left with the dissonance that he epitomises: fake conservatism, virtue-signalling without policy-making, fence sitting, betraying grass roots, appealing to voters from other parties by stealing their narratives, and styling the message instead of making it more substantive. The current Conservative Party has ‘adopted a style of politics in which there is no reality, only narrative’. A faker like Rod ‘Rory’ Stewart was perfect for the narrative.

In the latter 2000s, why did this former member of the Labour Party and loyal servant of Blairite foreign policy respond to David Cameron’s call for new MPs? Yes, Stewart expected better advancement in the new Conservative Party when New Labour was in decline. Yes, Stewart was self-interested and egotistical. Yet David Cameron’s new Conservative Party enabled him; it wanted young vacuous Leftists, it gave him a safe seat, and it encouraged him to spout social justice.

Why did this Blairite think he should lead the Conservative Party without embracing conservatism? Because Left-wing Conservative MPs (Michael Heseltine, Nicholas Soames, Ken Clarke) and Left-chasing defeatists encouraged him, including the current prime minister (Theresa May), who voted for him.

Before you think only MPs could be so stupid, remember that ConHome’s surveys of its readers found that they put Stewart second only to Johnson, while YouGov’s poll of the wider party members found that 23 per cent think favourably of Ted Heath, the most Left-wing of the party’s leaders, even though 93 per cent of the same members think favourably of Margaret Thatcher; she herself thought of the two of them were chalk and cheese.

The Conservative Party needs a true conservative to articulate to these dissonant members what conservatism really is.