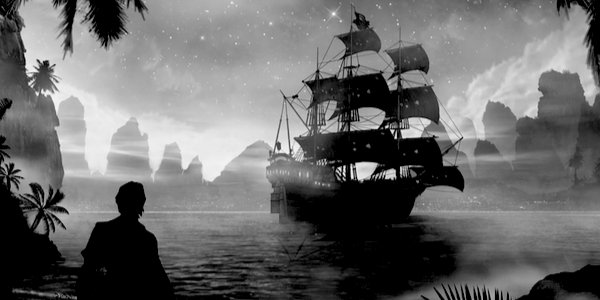 This year sees the 140th anniversary of Treasure Island, Robert Louis Stevenson’s classic adventure novel of seadogs and skulduggery, which was first serialised in a boys’ magazine in 1881. To mark the anniversary, as we face pandemics instead of pirates, a new version has been published and here we exclusively bring you the first chapter …

’TWAS in the Year of Grace 1766 that the Prime Minister, William Pitt the Elder, dropped in for a glass of grog at the Admiral Benbow Inn, near Bristol, where I was the potboy.

Six hours and many glasses later, he stumbled out to his carriage and I noticed that he had left behind a parchment on the table. I ran after him with it and as he took it from me, he asked: ‘What’s your name, boy?’

‘So, Rishi Hawkins,’ said the PM. ‘You look a likely young fellow-me-lad – strong of limb, staunch of spleen and keen of eye. How’d you fancy going on a treasure hunt?’

I was agog as he explained that England was bankrupt following the Great Pestilence of 1765. But he had lately learned that 30 years earlier, the then Lord High Treasurer, Gordon ‘Skinflint’ Brown, had squirrelled away 100 tons of the nation’s gold ‘tae put a few wee bawbies aside for a rainy day’.

Brown had buried the bullion on the Isle of Rum in the Inner Hebrides – and Pitt’s parchment contained a map marking the treasure spot with an X.

‘Well, Rishi my lad,’ said the PM. ‘I intend to fit out a ship to find the treasure and we need a cabin boy. Are you up for it?’

‘Very well. Report to the expedition’s leader, Mr Long Johnson Silver, at the Spyglass Inn in Bristol. By the way, once the gold is found, I need someone to officially take charge of it and bring it safely back to the Treasury. So I hereby appoint you Lord High Treasurer of England. But, er, best keep that to yourself for now. Goodnight.’

A week later, I met Long Johnson – a strange character indeed. He was hopping around the taproom of the Spyglass Inn on his one leg, a pot of ale in his hand,with his little dog, Cap’n Dilyn, perched on his shoulder.

His tarred, straw-like pigtails shook as he belted out sea shanties in Latin. Rumour had it that he lived at the inn with a lady who was not his wife, and that he was besotted by her.

‘Ah-harrr! So you’re young Rishi and we’re to be shipmates!’ he cried, thrusting his crutch towards me by way of greeting.

‘Aye-aye, Long Johnson,’ I replied, shaking his crutch. ‘And I’m keen to be off to the Isle of Rum.’

‘Ah-harrr! Belay your enthusiasm, young Rishi,’ he said. ‘It won’t be plain sailing, because Scottish waters are infested by a man-eating sturgeon. And Mr Pitt is worried that if we find the gold, the Scots may claim it – because it’s on their land.’

Since being secretly appointed Lord High Treasurer, I had been studying matters of finance and law, and I told Long Johnson: ‘In that case, I think legally you wouldn’t have a leg to stand on.’

‘Legally be damned!’ he snarled. ‘And crack no more leg jokes, Rishi lad – or you’ll feel the rough end of my crutch. Now, I’m off to find a ship and a crew.’

After a frantic few days gathering supplies in Bristol, I met up with Long Johnson on the quayside.

‘Ah-harrr, Rishi lad, I’ve bought us a fine ship, the Le Tamis,’ he said. ‘It was being sold off by the Revenue men, who caught it smuggling foreigners from France. Meanwhile, I’ve scoured the alehouses for a crew and found this lot of lubbers.’

He pointed to a rag-tag rabble of desperate-looking characters standing behind him, and shouted out his orders: ‘Corbyn, McDonnell, Starmer, Cummings and Gove, get up the rigging! Vallance, ye’ll be swabbing the deck and Ferguson, ye’ll be cleaning out the seat of ease. Hancock, await further orders. Look lively now!’

‘That there Gove’s a shifty-looking cove,’ I warned Long Johnson.

‘Aye,’ he mused. ‘Methinks he might be plotting to lead a mutiny. But we’ll have to risk it, because the tide’s a-turning and it’s time to go. Anchors aweigh!’

Long Johnson piloted us safely out of Bristol Harbour, where falling statues are a frequent navigational hazard. Once we were in open water, we lashed Hancock to the tiller and set a course for the Inner Hebrides.

As a fair wind took Le Tamis north, Long Johnson and I relaxed in the fo’c’sle and I put to him a question that had oftimes puzzled me. ‘Tell me, how did you lose your leg?’

‘Ah-harrr, Rishi lad,’ he said, taking a swig of grog. ‘T’were when I borrowed 20 pieces of eight from the Blind Pew Loan Company to do up my sweetheart’s boudoir with draperies, embroideries, frills, fineries and a French four-poster. Pew told me if I defaulted, it’d cost me an arm and a leg.

‘I thought he just meant there’d be extra interest payments, but when I defaulted he actually had his thugs cut off my leg. So if we find Skinflint’s gold, I’ll be able to pay Pew back the money I owe and stop him cutting off one of my arms.’

His words shocked me. ‘But Long Johnson, the gold is meant to save the country from bankruptcy, not pay off your debts!’ I gasped.

To my horror, he pulled out his cutlass and held it to my throat. ‘Ye scurvy whelp, Rishi Hawkins,’ he growled. ‘Ye’ve seen through my cunning plan! I’m gonna have to cut yer tongue out!’

I was in a fearful situation. But even more frightening was the thought that ran through my mind: What if Long Johnson finds out I am Lord High Treasurer?

Next time: Yo-ho-ho on the Isle of Rum.