Treble trouble – Lefties have the King’s choirboys in their sights 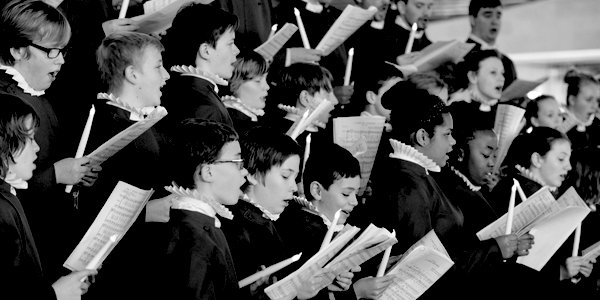 IT’S A century since the service of Nine Lessons & Carols began as an attempt to inspire and comfort people after the Great War. It’s ninety years since it was first broadcast live by the BBC. Since then millions have enjoyed the pure voices of 16 boy choristers and 14 male undergraduate choral scholars ringing in the start of Christmas.

As usual last year, it looked and sounded marvellous, pitch perfect with a purity of tone unequalled in the world. But it had been an extraordinarily challenging event for Stephen Cleobury, Director of Music at King’s College, Cambridge), who is now leaving the post after nearly forty years.

As he was working on this special centenary concert, opera singer Lesley Garrett, who hadn’t been in the news for a while, called the beloved candlelit service a ‘throwback to a bygone age’ and demanded that girls be allowed into the choir.

The Provost and Fellows of Kings – a notoriously Leftie college which to date has left the choir to itself – have appointed a new Director of Music, organist Daniel Hyde, who rather conveniently has previously criticised the ‘nicely packaged’ sound of ‘the very polite English cathedral choir’ and dismissed some young boys’ voices as ‘hooty’.

In an interview with the New York Times, Hyde, currently musical director of St Thomas Church in Manhattan, referred to in the newspaper article as ‘Hogwarts’, said he is hoping to challenge aspects of the English choral style, particularly ‘the traditional very polite English cathedral choir sound, where one is never louder than lovely, and it’s all very nicely packaged, the i’s are dotted and the t’s are crossed’.

Hyde, who will start his new job in October 2019, says he wants a greater variety of tone in the boys’ treble voices. He also says that the choir’s current sound had been developed and established as a result of its best-selling albums, while earlier recordings suggest it had once been ‘freer’ than today.

What ‘freedoms’ can we expect from the famous chapel by next year? In order of likelihood:

A girl to sing the world famous Once In Royal David’s City solo. Or perhaps a boy self-identifying as a girl?

Changes to the readings to include other versions of the Bible apart from the King James version.

Readings to include non-Biblical texts such as T S Eliot’s Journey of the Magi and fun texts that everyone can enjoy, such as Gervase Phinn’s A Wayne In A Manger.

Changes to the musical content for people who enjoy that nice warm Christmassy feeling without too much religious content: The Twelve Days of Christmas, Jingle Bells, Mistletoe and Wine (shorter odds as it does actually mention Christianity) and, most likely, Mary’s Boy Child, with steel drums. A newly commissioned carol with words by Carol Ann Duffy and music by Lily Allen.

Perhaps, in the realms of fantasy, a fairground ride in the chapel? Not fanciful at all. Norwich Cathedral is going to install a 40ft helter skelter in the West End of its nave from August 7 to 18 ‘to experience the centuries-old space in a new way and open up conversations about faith’. The fairground attraction will be followed by the arrival of Dippy, the Natural History Museum’s famous Diplodocus, which will be installed from July to October 2020 as part of its national tour. According to the cathedral Dean, Jane Hedges, Dippy will ‘prompt people to think about climate change and food production’.

To prevent that most dreaded condition, boredom, what about a skating rink in the quad? It’s already been done. In 2015, St Wulfram’s Church in Grantham, Lincolnshire, a 12th century, Grade I listed building, had an ice rink installed in the nave to ‘bring festive cheer to the town and bring new people in to the church and to show them what we really do.’ Not long after saying that, the vicar, Fr Stuart Cradduck, fell flat on his back.