Triumph and tragedy on the Feast of Crispin 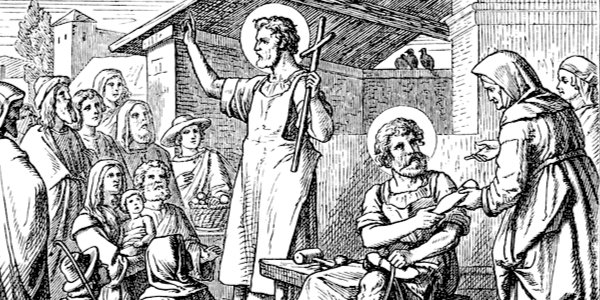 TODAY is St Crispin’s Day, once a familiar landmark in the Christian calendar. It is also the date on which two of the most remarkable military actions in our history took place, 439 years apart.

On October 25, 1415, Henry V’s English forces clashed with a much larger French army at Agincourt in northern France and, against all odds, emerged victorious – a triumph immortalised by Shakespeare.

On October 25, 1854, during the Crimean War, more than 600 British cavalrymen were mistakenly sent thundering down a Turkish valley to be killed or wounded in the Charge of the Light Brigade. They also had a fitting memorialist, the Poet Laureate, Alfred, Lord Tennyson, whose stirring verse ensured the tale of their tragic sacrifice would live on.

St Crispin’s Day commemorates the Roman brothers Crispin and Crispinian, Christian martyrs in the third century. Moving to Gaul to escape persecution, they preached the faith at Soissons, while working as shoemakers at night, until they were beheaded by the Roman emperor Maximian in 285 or 286AD.

Henry V’s Agincourt campaign came in the 78th year of the Hundred Years War, the intermittent struggle over England’s claim to the throne of France which in fact lasted 116 years.

The 29-year-old warrior king was determined to reassert his sovereignty and in August 1415 set sail for Normandy with an invasion fleet carrying around 11,000 troops – men-at-arms and archers.

Henry first laid siege to the strategic port of Harfleur, at the mouth of the Seine. Here, Shakespeare has him giving his rousing ‘Once more unto the breach’ speech. although in reality a full-scale infantry attack on the town was called off when its defenders surrendered after 35 days.

By then, the English forces were severely depleted by dysentery. So on October 5, Henry left behind a garrison to hold Harfleur and started to march the rest of his army – reduced to around 6,000 – to English-held Calais, 150 miles away along the coast to the north-east.

However, when the troops reached St Valery on the south bank of the Somme after covering 88 miles, they found river crossings destroyed or guarded and had to make a lengthy detour inland.

On October 24, having covered 230 miles and with 40 miles still to go to Calais, Henry’s army arrived sick, soaked, exhausted and famished near the village of Azincourt (Agincourt) in Picardy. There a massive French army lay in wait.

The size of the French forces is disputed, with claims as high as 120,000. Juliet Barker, author of Agincourt: The King, the Campaign, the Battle, says a figure of 36,000 is most likely – a six to one advantage over Henry’s men.

Next morning, after a night of torrential rain, both armies deployed to face one another across an expanse of meadow and freshly-ploughed fields hedged in by woods.

In Shakespeare’s immortal words, this was when Henry told his men that they were ‘we few, we happy few, we band of brothers’. The speech concludes:

And gentlemen in England now a-bed
Shall think themselves accursed they were not here,
And hold their manhoods cheap whiles any speaks
That fought with us upon Saint Crispin’s day.

The king did indeed go round encouraging his troops that morning before he formed them into a single battle line of around 1,000 men-at-arms and 5,000 archers. The entire English army would fight on foot.

The French faced them in three massive divisions, one behind the other, each thousands strong. However, impressive as it was, their army was not a cohesive unit, but a collection of often antagonistic territorial and dynastic factions with divided loyalties and ambitions, each knight seeking individual glory.

By contrast, in Henry V the English had a single, strong, inspirational commander who assiduously maintained discipline.

The downfall of the French began with their initial tactic – using cavalry to attack Henry’s archers. The riders were bloodily repulsed as they ran into a barrier of sharpened stakes and a storm of arrows.

With each longbowman unleashing at least ten aimed arrows a minute, the sky was darkened with deadly missiles. Hundreds of French knights and horses were soon spread in a writhing, tangled heap across the battlefield.

The armour-clad warriors of the French vanguard, following the cavalry on foot – and already slowed by the muddy ground – could not break through this ghastly blockage of bodies.

Then they were hit from behind by a wall of their own close-packed soldiers, who in turn were being helplessly propelled forward by the unstoppable momentum of the attacking army even further back.

As the logjam trapped more and more troops, successive waves of men-at-arms slammed into each other from the rear, like a motorway ‘concertina crash’. Hemmed in by the woodland, unable to move or manoeuvre, they became a solid mass of thousands of bodies – easy targets for Henry’s archers.

The French had their own archers and crossbowmen, but had deployed them behind the main force, meaning they could give no effective aid.

When Henry’s longbowmen had fired all their arrows – they each carried about 60 – they waded into the melee alongside the English foot soldiers to finish off the floundering enemy with swords, knives, hammers and axes. It was unremitting slaughter.

Finally, the French conceded defeat. Their exact casualty figures are unknown, but there were possibly between 6,000 and 8,000 dead, including a large swathe of French nobility. English losses were minimal, probably in the hundreds.

Agincourt was a stunning, almost incredible, victory, which led to Henry being named heir to the French throne. Although this was never fulfilled, nothing could detract from his triumph.

By contrast, the Charge of the Light Brigade almost four and a half centuries later was an unmitigated disaster.

The Crimean War started in October 1853 when Britain, France and Sardinia allied with the Turks against Russian expansionism threatening the Ottoman Empire.

During the siege of Sebastopol, the 65-year-old British Army commander, Lord Raglan – who had lost an arm at Waterloo in 1815 – established a position on the Sapoune Heights overlooking a valley near Balaclava. His cavalry were gathered 600ft below on the valley floor.

On the morning of October 25, Russian troops were spotted trying to haul away guns from redoubts on the side of the valley that they had captured from Turkish forces earlier that day. Raglan called for action.

He had his Quartermaster-General, Richard Airey, draw up a written order telling cavalry commander Lord Lucan to try to prevent the guns being taken. Airey sent an aide-de-camp, 36-year-old Captain Louis Nolan, down to the valley on horseback to deliver the note.

It read: ‘Lord Raglan wishes the cavalry to advance rapidly to the front, follow the enemy & try to prevent the enemy carrying away the guns. Troop Horse Artillery may accompany. French cavalry is on your left. Immediate. R. Airey.’

When Nolan reached 54-year-old Lucan, he told him: ‘Lord Raglan’s orders are that the cavalry should attack immediately.’

A puzzled Lucan asked: ‘Attack, sir! Attack what? What guns, and where?  What guns are we to recover?’

Flinging out his arms, the irascible Nolan pointed to the further end of the valley: ‘There my lord, are your guns and your enemy!’

This was the fatal blunder of Balaclava. While from the heights Raglan could see the guns in the redoubts, they were not visible to his troops on the valley floor. The only guns that Lucan could see were a formidable battery of Russian cannon lining the far end of the valley a mile and a half away, towards which Nolan apparently gestured.

Lucan, stung by Nolan’s insubordinate attitude, broke off further argument and passed the order to his brother-in-law, James Brudenell, 7th Earl of Cardigan, the 57-year-old commander of the Light Brigade.

The two loathed each other, but were both baffled by what seemed like an invitation to suicide. However, neither demurred. And so, muttering: ‘Well, here goes the last of the Brudenells,’ Cardigan led his 670 men into the mouth of Hell.

As the cavalry set off at a trot, Nolan suddenly galloped ahead and made a gesture with his arm – perhaps trying to warn Cardigan of his mistake. Next second, he was killed by a shell splinter and the brigade continued towards its doom.

Raked by Russian fire from both sides of the valley, the troopers charged, doggedly closing ranks as comrades were cut down. Those who survived then faced the volleys of the battery in front of them. Incredibly, many got through unscathed, attacking the Russian gunners with sabres and lances in a mad frenzy. Then, faced by a line of enemy cavalry, they turned to fight their way back.

Cardigan was among the first to turn tail when he realised he had been recognised by a Russian commander, who told his men to try to capture him.

The whole action was over in 20 minutes. Of the 670 men who took part in the charge, 110 were killed and 129 wounded. Another 32 were wounded and taken prisoner. Some 375 horses were also killed.

Cardigan, having galloped back to safety, left the field and boarded his yacht in Balaclava harbour, where he dined and declared himself blameless for the fiasco.

Amid the recrimination and scapegoat-hunting that followed, he said he had only been obeying orders. Lucan said the same, putting the blame squarely on Raglan. The controversy continues to this day – St Crispin’s Day.

Share
Facebook
Twitter
WhatsApp
Email
Previous articleCan the West save Taiwan from China?
Next articleQ: Who decides what to put in your body? A: Bill Gates