Trudeau, Macron and two different ways to fake the news 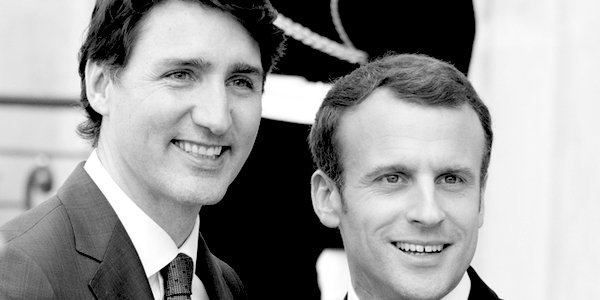 Although the expression has been popularised by Donald Trump ‘fake news’ is nothing new. It has been with us from the very beginning.

In the Garden of Eden the first item to be reported was spun as fake news. When asked what had been going on with the fruit of the tree, Eve said it was all the serpent’s fault, then Adam blamed God and Eve: ‘The woman you gave me’.

Shakespeare knew where the arts subsidies came from as well as any modern playwright. He wrote for the Tudor establishment and now everyone knows just how horrid Richard III and Macbeth were, even although the truth is somewhat different.

During World War I British propaganda, or fake news, was very effective. Atrocity stories, many of which never happened, helped stir up hatred of the dastardly Hun and keep the people on side despite calamitous losses.

Governments have no problem with fake news, as long as they are providing it. When it proliferates from non-governmental or non-establishment sources they tend to react badly.

For President Trump fake news is a gift: he weaponises it as an accusation. It highlights the bias evident in much journalism and elicits howls of approval from his base who have had enough of a condescending mainstream media.

More common are the reactions of Trudeau and Macron. Instead of pointing out what they think is fake news they attempt to stifle the opposition. One uses the carrot, the other the stick. Both are dangerous to a healthy democracy.

As part of a full fiscal update about the federal budget the Canadian government has announced it will be providing more than Can$600million (£345million) over the next five years to bail out the country’s failing mainstream media. This is not as innocent as it may seem: it will result in a compliant media unwilling to bite the hand that feeds it.

Instead of fighting to remain independent, Canada’s media organisations and journalists’ union are celebrating. Whilst holding out their begging bowls for Trudeau’s ‘gift’, they argue that editorial independence will remain as staunch as ever. How could their journalistic integrity be compromised by entering into a Faustian deal with the powers-that-be?

One of the handouts is a refundable tax credit paid to ‘qualifying news organisations’ to support ‘labour costs’. Again, an ‘independent panel established from the news and journalism community’ will be appointed to determine corporate eligibility.

What could go wrong with that?

The $600million is a form of control and censorship. By accepting this money, the Canadian media as a whole becomes no different from the national public broadcaster CBC. Like the BBC the news and opinion provided by CBC are resolutely centre-Left, with a sporadic token conservative view cautiously inserted for the purpose of maintaining the façade of free speech.

Trudeau employs the carrot. If it takes a centre-Left pro-globalist, pro-government stand, a news organisation can get financial support from the taxpayer. Think independently and you are in danger of the largesse drying up. This is an attempt to feed the compliant and starve the contrary.

Emmanuel Macron, plunging in the polls and facing riots in the streets, has a different approach. He employs the stick.

Macron reckons that what is needed is for the state to step in and decree what’s true and what’s not, and then to stamp out the latter. The French government has passed legislation attempting to stop the viral spread of what it terms ‘disinformation’, or fake news.

The state has awarded itself extraordinary powers for the three months prior to an election. A judge, when requested, is empowered to decide whether a particular news report is false and, if found to be fake news, ban it from being broadcast or require social media companies to stop it from spreading. However, instead of enduring the bothersome tedium of a trial in an attempt to determine the truth by examining the evidence, the judge has two days to make a decision.

With the tsunami-like spread of information on the internet it can be almost impossible to fact-check stories, especially on a subject about which the judge might know little, in a mere 48 hours. Once a story is loose in cyberspace it will require more than a French judge to stop it.

Given the inability of the authorities to control the spread of child pornography on the internet, do they really imagine they can take adequate steps to silence the thousands of websites which can spring up in a moment? The internet has placed a powerful tool in the hands of the disenfranchised.

No matter how much the mainstream media is controlled and coerced there will always be outlets willing to speak out and air contrary views. Some of what is produced in the internet is disinformation. Most is not: it’s merely uncomfortable for the establishment. Perhaps our governments should trust us to have the intelligence to make that judgement ourselves – we certainly don’t trust our governments to do it for us.

Truth is not the property of any government. Free speech is the cornerstone, not just of democracy, but of any healthy society. The interchange of ideas and the clash of opinions, the people who are willing to point out that the emperor has no clothes, these are what enable us to progress. Societies which demand monolithic media reporting end up as stagnant societies – or worse.