Truss v Sunak: Full of sound and fury, signifying nothing 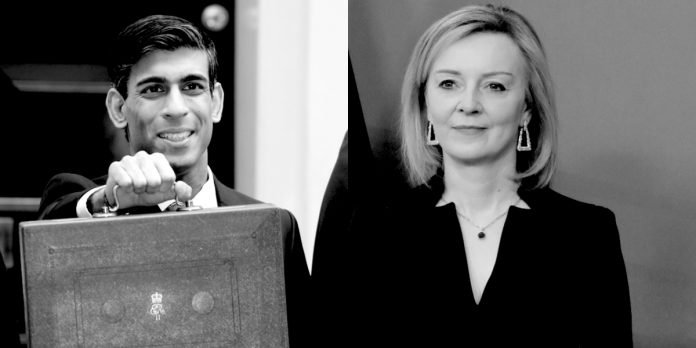 JUST who won the leadership debate on Monday night? Why, the gaslighting media of course.

If you watched that debate – and I did, so you don’t have to – then you would have come away thinking Rishi Sunak has good dress sense, Liz Truss wears inexpensive earrings and there is a cost of living crisis which may be made worse by a tax cut, or indeed improved by a tax cut.

Oh, and the standout winner was the sound of BBC Political Editor Chris Mason’s voice, which its owner believed was part of the debate also.

You certainly would not come away thinking immigration remains a serious issue for the country, that young people cannot afford to buy a home, and that the NHS continues to swallow close to every penny the country produces – the other pennies are spent servicing the debt built up by the lockdowns.

Debt interest payments rose to £19.4billion last month, £10.3billion more than in June last year and the highest since records began in 1997. A quarter of the UK’s government debt is index-linked, so the cost of servicing it is pushed up by inflation, which is running at a 40-year high. This criminal level of national debt and interest is another aspect of the cost-of-lockdown crisis.

The dividing line between the two candidates is that Truss wants to introduce tax cuts right away (sensible given that the tax burden is the highest it has been in 50 years), but Sunak says this will fuel inflation and that it is immoral to leave these debts to the next generation.

This would be persuasive it wasn’t for the fact that Sunak himself lost total control of the public finances during the lockdown – from his barking mad ‘eat out to help out’ scheme, to repeated extensions of furlough, to the much-abused bounce back loan scheme. So, it is all a bit late in the day to start worrying about the next generation now.

Speaking of lockdown, this was where the presenter and the candidates remained silent. It was not mentioned at all, which tells you all you need to know about our gaslighting media. It was not mentioned because, according to those who set the terms of the debate, lockdown was necessary and therefore not up for debate.

Whether lockdown was a good idea, the economic costs and the cost to our children’s health was ignored. In the latest of a long line of reports pointing out the damage lockdown caused to the lives of children, we now know ‘lockdown triggered an outbreak of hepatitis in young children because restrictions prevented them from developing immunity to common viruses, research suggests. https://www.thetimes.co.uk/article/child-hepatitis-surge-blamed-on-covid-lockdown-d0cc3h888

‘About 268 children in the UK have been struck down by acute hepatitis – sudden inflammation of the liver – this year and more than 1,000 cases have been reported worldwide. Four in ten of the UK cases have required intensive care and 12 have needed lifesaving liver transplants’.

But sure, they are only kids and we all know kids were disposable when it came to lockdown – the craziest idea since the slaughter on the Somme. Lockdown, the gift that keeps on killing.

Moving on. The fact that thousands of illegal immigrants continue to cross over from France to the UK every year was never even mentioned. The fact that there is housing crisis – you in the expensive suit, anything to say on this? Nope, the BBC didn’t think that was worth a question either.

Rape gangs, the collapse in standards by the police? Not mentioned. The BBC didn’t even mention its favourite institution of all, The Blessed NHS. Best talk about Sunak’s shoes.

One person who did get a lot of air time was Chris Mason. Goodness, he does like the sound of his own voice. He had his pathetic attempts at gotcha questions, dragging up a quote to make Liz Truss look bad, even though it was something Dominic Raab once said, and not Truss.

On and on and on he went with his ridiculous interventions. I think one moderator will do, so please leave out Tweedledum and Tweedledee in the form of Chris Mason and Faisal Islam next time.

What the media, (the Times and the Daily Mail) and Team Truss are running with is Rishi Sunak being ‘very aggressive’. A spokesman for Truss claimed that Sunak was ‘not fit for office’, adding: ‘His aggressive mansplaining and shouty private school behaviour is desperate, unbecoming and a gift to Labour.’ That is not impression I got from the debate, and I was leaning towards Truss before it started.

I accept Sunak may have interrupted too much at the beginning, but as the debate went on I don’t think he was being aggressive. He was coherent and articulate.

Perhaps this comes across as ‘aggressive’ because Truss is simply not as articulate. So, what do her team go for? Well, they can’t accuse Sunak of being pale, but they can whip out the old sexism/mansplaining card, which they did and no doubt will continue to do so. Sunak is male, therefore he is aggressive. This is quite pathetic and desperate, but there we are.

I think Sunak was right in not apologising for the fact that he went to private school or indeed his wealth. There may be other problems with his father-in law’s wealth, but if being conservative means anything, it means aspiration and lifting all boats.

What conservatism should not do is the politics of envy, jealousy and the belief that if people (especially minorities) get above themselves, it’s time to take them down a peg or two. Truss herself did not do this – but it is unedifying to see her team do so.

Overall though, the leadership debate was the usual nonsense where very little of importance gets discussed. Standard operating procedure then from the BBC.