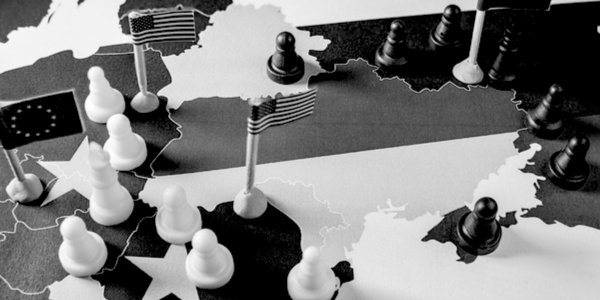 IT IS increasingly evident that the UK government under Boris Johnson got its policy over the Russia-Ukraine war wrong from the start. What good it did for world security and stability for our government to be involved in stirring up tensions in Ukraine is open to serious questions.

With hindsight it seems that Nato miscalculated: we should have left well alone and not interfered in this area of the world beyond encouraging talks with Russia.

Our failure to do that has brought calamity for Ukraine, and energy and food consequences which dramatically affect Europe and much of the rest of the world. It has allowed a US-led Nato to be influenced by globalist vested interests whose stated aim has been to bring down Russia, arguably to control the vast natural resources of both Russia and Ukraine.

Looking at the facts, Ukrainehas 5 per cent of the world’s natural and mineral resources. Its reserves of lithium are amongst the largest in Europe. In terms of extraction, it is second globally in gallium, fifth in germanium, sixth in titanium, seventh in iron and eighth in manganese.

Ukraine has the second biggest gas reserves in Europe, apart from Russia-Asia (much of it not exploited). Europe is dependent on 40 per cent of its supplies from Russia, which Russia also supplies about 13 per cent of the world’s crude oil.

Ukraine supplies 0.8 per cent of the world’s fertilisers, while Russia supplies 15 per cent.

This brief glance shows the importance of these commodities to the rest of the world. It is clear that a shortage in any of these areas will send up prices. So it should have also been clear that any sanctions against such a major supplier as Russia would only rebound on the sanctioning countries, harming them far more.

The damage done to Ukraine’s economy is inestimable. The dire effects on the economies of major European countries are reported daily. Spain is controlling the use of air conditioning. The lights have gone out in Berlin. Germany’s entire manufacturing industry is threatened. This winter will see serious energy rationing as well as unprecedented price rises and inflation

Much of this could have been avoided had not Europe committed itself to suicidal net zero policies. But there is no doubt that Britain and the EU’s intransigent position and refusal to countenance a diplomatic solution has acted as a catalyst of this crisis.

The deep irony is that it looks as if Zelensky’s Ukrainian government will have no choice but to open talks with Russia and have unnecessarily put their country through destruction, turmoil and loss of territory. At the same time the ‘Western’ countries, especially the UK, are putting their citizens through an entirely avoidable nightmare.

Johnson’s involvement with the Zelensky cause in Ukraine was always suspect. He needed a convenient distraction from the ‘partygate’ scandal. The man who never visited Afghanistan when he went along with Nato’s sell out ‘deal’ with the Taliban, letting down millions of Afghans and of course all the veterans who were sacrificed there, was ready to go to Ukraine for freedom fighting photo opportunities. There were no British interests involved in Ukraine and no defence obligations.

As this foreign proxy war progressed into a disastrous mess the media encouraged continued involvement, telling the public that Russia was hopeless and Ukraine were winning though the truth is they had been losing since day one, at a cost to the UK of more than £4.5billion, most in military aid.

The best thing the UK government under a new PM can do now is to carry out an urgent damage-limitation exercise. This means adopting a neutral position in the Ukraine conflict, stopping sanctions against Russia, and encouraging a peaceful resolution. The UK must look after its economic interests, which are not served by taking sides in this region. This is essential to halt the escalating energy, fuel and food crisis.

About a week ago the two Conservative leadership contenders had the opportunity to change their Ukraine policy when the issue came up at a debate. They both failed miserably and instead had the gall to say that they expected the public to contend with more suffering to support their Ukraine policy.

The public does not have to stand by silently. A Parliamentary petition has been started that makes the simple point that the policy on Ukraine has no electoral mandate. It states that it is the British public who must be given the right by referendum to decide on this issue if the government will not change the policy themselves.

Share
Facebook
Twitter
WhatsApp
Email
Previous articleThe Covid cultists flog us a fairy story, but the BBC calls it ‘compelling evidence’
Next articleFootball gets off its knees at last