NewsPaperthe art of publishing
HomeNewsUkraine: Legacy of the Hunger Plague
97

Ukraine: Legacy of the Hunger Plague 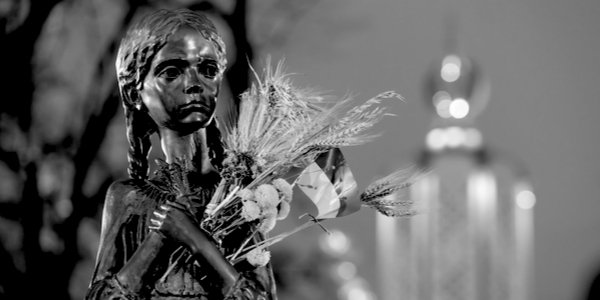 THE depth of Ukraine’s patriotism and the resolve its people are showing is perhaps easier to understand if you consider the hideous attentions it once received from its powerful neighbour. Barely more than a lifetime ago, under the rule of the old Soviet Union, a famine  was created as a method of control and revenge, which killed at least four million Ukrainians and possibly many more.

In Ukraine, it’s remembered as the ‘Holodomor’, or Hunger Plague, a consequence of the Communist push to collectivise agriculture across the USSR, by force if necessary. Ukraine was certainly not the only one of the constituent Soviet republics badly damaged in the process, but its suffering was especially grievous.

After the Bolshevik seizure of power in 1917, Ukraine, a part of the old Tsarist empire, declared independence. The Soviets, determined that their own new empire would include every inch of the Tsar’s old realms, invaded. The fighting that followed is generally seen as a part of the wider ‘Russian’ civil war: the conflict between Reds and Whites. In Ukrainian eyes, it was also their national liberation war against a foreign invader.

At the war’s end, when a defeated Ukraine found itself absorbed into the Union of Soviet Socialist Republics, its people still saw themselves as a distinct nation, a view that even many Ukrainian Communists held. Today it sounds comically naïve, but many in the upper reaches of the Ukrainian Communist Party hoped the Soviet Union might live up to early rhetoric about a union of nations, freely and voluntarily combined to pursue Socialism. Any such claims were of course nonsense. The USSR was a monolith controlled from one centre, Moscow. The Bolsheviks could never trust any alternative source of power or idea that might clash with their totalitarian ambitions.

Ethnic nationalism, simple patriotism or allegiance to any principle not part of the all-embracing Communist ideology were seen as dangerous. Ukrainian nationalist aspirations were an almost existential threat. Ukraine’s agricultural wealth and strategic position meant it could never be allowed the slightest hope of separation. Its hopes of independence had to be destroyed, something the Soviets set out to do after only a few years.

Although of course all of the USSR suffered dreadful repression under Communism, Ukraine’s experience in the late 1920s and early 1930s was beyond brutal. Of particular horror was the Communist campaign to ‘collectivise’ agriculture. The entire peasantry were to be ‘voluntarily’ recruited into the collective farm network, often at gunpoint. Those who refused were either executed or were sucked into the dreadful Soviet Gulag system. Private property was in effect abolished in what was perhaps the greatest act of theft the world had ever seen. Everything the peasants had owned, their land, farm buildings, livestock, equipment and tools down to the last hoe, was seized, often with great brutality, to become property of the collective.

Where they could, the Ukrainians fought back with sabotage and acts of resistance.

Government officials working in isolated areas were often killed. Arson against state and collective farm buildings was rife and a general sullen obstructiveness was pushed as far as individuals could dare.

The Bolshevik response was deliberate, methodical and savage. Virtually the entire food production of the Ukraine was forcibly requisitioned. Meagre rations were allowed to those who showed obedience but the amount of food left in the country was nowhere near enough to support its population. The Ukrainian countryside was essentially sealed off. The internal Soviet passport system was used to prevent refugees fleeing, and offers of food aid from international relief agencies were refused. How dare anyone doubt the ability of the great Socialist society to feed its own people? The Soviet government volubly denied any food shortage as slander.

Shamefully, much of the West’s liberal and media establishment assisted the cover-up. Famously, the New York Times reporter Walter Duranty, despite or perhaps because of his backing of claims that claims of famine were a malicious fabrication, received a Pulitzer Prize for his reports from the Soviet Union at the time.

The good liberals, the modish Western intellectuals and useful idiots of the Left (Britain’s Fabian movement providing a particularly disgusting example) fell for the line of the Soviets. Even the Dean of Canterbury busily defended the worker and peasant  paradise as Ukrainians starved to death.

The suffering was beyond description. Cannibalism became rife.

Take a moment to imagine that. How, only 90 years ago, in a region with the richest soil in Europe and an industrious peasantry eager to work their own land, people were driven to eating their own children. Not as the result of war or pestilence but as the result of deliberate policy decisions by government.

Putin is not Stalin and it is now 2022, not 1932, but this is the legacy that haunts the Ukrainian imagination as once more they fight for their freedom. Just as we in the West rightly remember Hitler’s Holocaust against Europe’s Jews, we should remember the Soviet Holocaust against Ukraine.