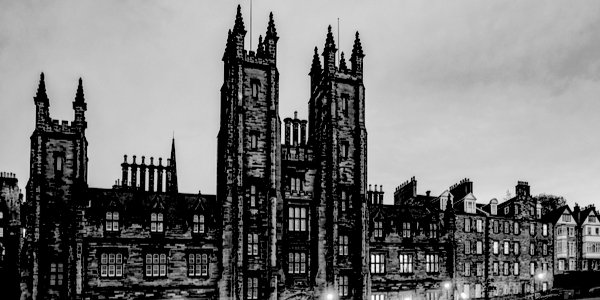 IF ONLY the University of Edinburgh had established its Equality, Diversity and Inclusion Committee (EDIC) 300 years ago, the undergraduate David Hume might have renounced his white privilege, espoused critical race theory and been an activist ally of a nascent Black Lives Matter. Instead, without today’s equality and diversity bureaucracy to prevent his free mind from going rogue, Hume became the foremost philosopher of the Scottish Enlightenment.

Not only did he fail to kneel and raise a fist, in one of his footnotes he was ‘apt to suspect the negroes to be naturally inferior to the whites’. Although that view was widely shared at the time, the contemporaneous attitudes of the 1700s are irrelevant to the university’s woke warriors: for those passing present-day judgment on David Hume, his incendiary words might as well have been written three days ago instead of three centuries back.

The result is that a brutalist high-rise horror, named David Hume Tower since its erection on campus in 1963, will no longer memorialise Edinburgh University’s renowned alumnus.

Hume’s name has been dropped because the university’s EDIC and Race Equality and Anti-Racist Sub-committee ‘has been further energised following the killing in May of George Floyd and the ongoing campaigning by the Black Lives Matter’. In a statement of vapid verbiage, the Equality enforcers solemnly inform us: ‘It is important that campuses, curricula and communities reflect both the university’s contemporary and historical diversity and engage with its institutional legacy across the world.’

For the moment, David Hume Tower will be known only by its postal address of 40 George Square. This lacklustre label is reported to be ‘initially temporary until a full review is completed’; however, you can bet that the structure will never again commemorate the university’s now notorious former student: ‘The interim decision has been taken because of the sensitivities around asking students to use a building named after the 18th century philosopher whose comments on matters of race, though not uncommon at the time, rightly cause distress today.’

Rightly cause distress today? Put another way, in the eyes of the university’s diversity disciples, any students not upset by being in a building bearing the name of a long-dead white male with outdated views on race are themselves suspect.

The finger presumably points at anyone who did not put their name to the petition, begun by student Elizabeth Lund, ‘Rename David Hume Tower at UoE’.

Ms Lund’s demand had been around for several months, yet with 33,000 students there were barely 1,800 signatures – hardly indicative of a mass revolt – when the university metaphorically ‘took a knee’ by deleting David Hume. Most of Lund’s lament is too tedious to recount except for one unintentionally amusing paragraph: ‘A previous iteration of this petition campaigned for the name to be changed to Julius Nyerere Tower. It has been brought to my attention by multiple students that Nyerere was harmful in his own ways, both through his ties to dictatorship and through his homophobia. This petition now only campaigns for the renaming of David Hume Tower. Thank you so much to the students who contacted me to educate me. I sincerely apologise for any harm I have caused.’

Fancy that: a black African leader born two centuries after David Hume and who also studied at Edinburgh, in this case Julius Nyerere, the first President of Tanzania, turned out also to be ‘harmful in his own ways’. Coincidentally, Edinburgh was also alma mater of Nyerere’s contemporary in neighbouring Malawi; it is safe to assume that former President for Life Hastings Banda would similarly fail the purity test.

Nonetheless, Edinburgh University has kowtowed to a petitioner who originally believed – and probably still does – that the tallest structure on campus should commemorate a Tanzanian tyrant rather than Scotland’s most celebrated and influential philosopher. Small wonder, then, that in a trenchant open letter to the Principal a group of the University’s senior academics described the institutional prostration as ‘tokenistic rather than principled’ and ‘simplistic, and not appropriate for a serious university’.

The renowned Scottish historian Sir Tom Devine condemned the capitulation as ‘the intellectual sin of anachronistic judgment’ and called for Peter Mathieson, the Principal and Vice-Chancellor, to ‘hang his head in absolute shame’.

A more resolute response from pusillanimous Pete to Elizabeth Lund and other student signatories would have been: ‘The David Hume Tower was so named long before you arrived and will be so named long after you have left. If in the meantime you are so disturbed by a footnote written three centuries ago that it prevents you from studying in a building bearing Hume’s name, perhaps the University of Edinburgh, or indeed any seat of learning, is not for you.’