NewsPaperthe art of publishing
HomeNewsVegans tuck into a sacrificial lamb
82

Vegans tuck into a sacrificial lamb 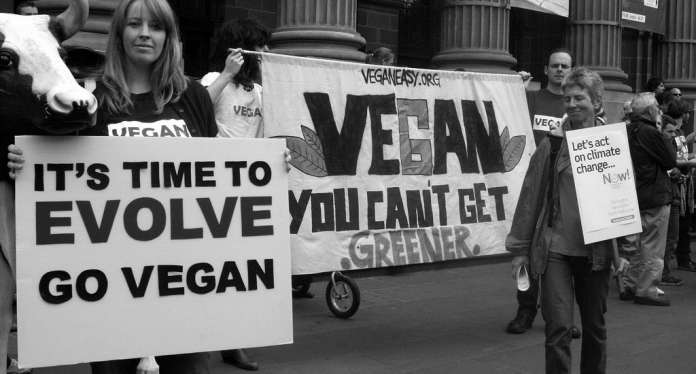 Waitrose has got an offer on pitchforks at the moment: Buy One, Get One Free.

The thing about those BOGOF deals is that they are always confected. They hike the price of the item before pretending to halve it.

As anyone who has bought two bags of salad will attest, they’re a false economy too. You might have an obvious need for one pitchfork – you might want to join a sanctimonious mob and campaign for some complete stranger to lose his job.

But there really is no need for the second item. The bag of salad goes off and the pitchfork ends up being surplus to requirements.

And you can’t chuck it away, unless someone picks it up and uses it on you.

This would be a quirky feature idea to pitch to the editor of Waitrose Magazine.

But, as Don King would say, there are only two chances it’d get accepted. Slim Chance and No Chance. And Slim (William Sitwell, the editor of the magazine) is not in town right now.

He’s been sacked. Sorry, asked to resign, thanks to the combined actions of freelance writer Selene Nelson, Scuzzbreed magazine and some nonentity called Danny Hewitt, the last of whom petitioned to get Sitwell fired.

All because he made a joke about vegans by email. To one person. Stupid and ill-judged, yes. Emails are never private, as an editor should know . . .

Now all these social media munchkins are gleefully celebrating the death of a man’s career. Is he really the Wicked Witch of the West? All we know about William Sitwell is that he’s been employed by John Brown Publishing for 20 years, so it’s fair to assume he might have long-standing obligations on mortgages, partners and dependants. He may have kids in school, or parents in care. Or both.

Not that these social justice warriors seem to care. Do they even think about that? Where is the social justice in seeing a complete stranger’s employment rights revoked? How progressive, in reality, are these horrible Owen Jones patrols? Would the Chartists have organised to go after fellow workers? They sought equality through improving their own rights, not by destroying those of others.

I’m surprised at John Brown Publishing – whose Viz comic delighted us with Suicidal Syd, The Fat Slags and The Thieving Gypsy Bastards – hoiking their skirts up at a joke about vegans.

I’ve got nothing against vegans. One of my favourite characters in Star Trek was Mr Spock. But they don’t come out of this well. Perhaps if they got more protein they’d have a bit more haemoglobin, and they’d get more oxygen to their brains.

In the pitchfork’s defence, she never meant to trigger ‘no one’, not even a vegan, with her second pitch to Buzzfeed.

Following the article on @BuzzFeed – and in the interests of transparency – here's my original pitch to the editor of Waitrose, along with my response to his reply. No "triggered vegans" here, thanks! :) #Vegan #Waitrose pic.twitter.com/bjRon1N0bb

If any of this had made a blind bit of difference to workplace bullying she might have had a defence. Instead she’s encouraged a different kind.