Vyborg: maybe the most important town you’ve never heard of 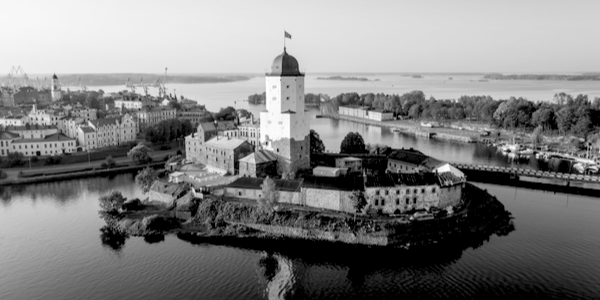 THE sun beats down through the cathedral’s non-existent roof. It hasn’t had one since 1940 when a Russian incendiary bomb crashed through and gutted the place. It stands as a monument to the violent tides of history that have repeatedly swept over this corner of northern Europe.

A Catholic sanctuary existed on the site of the cathedral since the Swedes founded the town in 1293. They were on a crusade to subjugate one the last remaining pockets of European paganism. The territory of the conquered Karelians was to remain under Swedish control for centuries.

Born in violence, bloodshed was to become a recurring feature of Vyborg’s fate. Owing to its key strategic location, anyone wishing to control the Baltic would have to take the town’s imposing castle, leading to centuries of war.

As the Protestant Reformation swept across northern Europe in the 1500s, the Catholic sanctuary became a Lutheran church. In 1554 it became a cathedral.

It wasn’t to be its last change of denomination. In 1710, the cathedral became Russian Orthodox after Peter the Great conquered the town during the Great Northern War. Having started construction of Saint Petersburg only a few miles south, the presence of this Swedish outpost threatened his eponymous city.

Peter the Great was arguably the first European-style monarch of Russia. This is reflected in his choice of major generals during the siege, the Scotsman Robert Bruce and German Wilhelm Bergholtz. Their capture of Vyborg was one of the nails in the coffin of Sweden as a leading European power: for ever after they would be relegated to making flat-pack furniture and Europop. How are the mighty fallen.

Russian control did not signal an end to Vyborg’s hardships. In 1812 it became part of the Grand Duchy of Finland, an autonomous part of the Russian Empire. By this time the cathedral had become an armoury and magazine, its religious function ceasing. It was an apt change of purpose in light of the volatility that was to follow.

The collapse of the Romanov dynasty, the diligent but unbendable Nicholas II resigning in a railway siding near Pskov, led rapidly to Finnish independence. Nevertheless, the revolutionary waves that swept over Russia inundated Finland too, with Lenin having lived in Vyborg for a time between the February and October revolutions in 1917. The Red Finns captured much of southern Finland in early 1918, but they were quickly routed by White Finnish forces supported by German Empire troops under the command of Mannerheim.

A key engagement of the civil war was in Vyborg, by then called the Finnish ‘Viipuri’. White Finnish forces took the city, resulting in the destruction of its fortifications and about 1,000 dead. A massacre of Red Finns ensued.

As often happens, history repeated itself. Following a brief return to Orthodoxy in 1913, the cathedral once again became Lutheran in 1918. This latter stage of the building’s life was to coincide with the town’s most volatile era.

In 1939, Stalin, like Peter the Great before him, took umbrage at the presence of a foreign town so close to Saint Petersburg (by then renamed Leningrad). Demanding control of Vyborg in return for some remote areas of Karelia, Stalin presented the Finns an ultimatum which they rejected.

Stalin sent in the Red Army. What followed was a humiliation: although vastly outnumbered and out-gunned, the Finns held their own against the might of Stalin’s army for months. During the course of the Winter War, over half of Vyborg’s buildings were destroyed – the cathedral included – and the population evacuated.

The Finns could not hold out indefinitely, and a peace treaty signed in March 1940 handed Vyborg to Soviet control. Nevertheless, the Winter War tarnished the USSR’s reputation. It also convinced the German Chancellor of an easy victory in the event of invading the USSR. If the Red Army couldn’t easily triumph over the trifling Finns, they stood no chance against the superior forces of the Wehrmacht – or so the thinking went.

And so the Finns returned to Vyborg just over a year later in 1941, taking the opportunity to reclaim the lands lost in 1940 as Stalin struggled to deal with Hitler’s Operation Barbarossa. This second conflict is known as the Continuation War (1941-44). Although partly repopulated with some of its former inhabitants, the resumption of Finnish control over Vyborg was not to last. After the largest battles ever fought in the Nordic area as part of the Vyborg-Petrozavodsk offensive (1944), the Finns lost the town once more. The peace treaties signed after the conflict ensured a return to Finland’s shrunken 1941 borders and the evacuation of the region’s remaining Finnish population. Russians and peoples from across the USSR soon repopulated the area.

Today, much of the centre of the town is yet to recover from this final explosive spasm of violence. The cathedral’s overgrown ruins contrast with the restored buildings of the town’s high street, and only a few minutes’ walk away lie more hollowed-out buildings.

Today people come to town to see the medieval castle and eat at the kitsch medieval restaurants. The only Finnish or Swedish you’ll hear is spoken by the tourists, not that there are many currently.

If you’re ever in Saint Petersburg, a trip to Vyborg is well worth it. It makes you realise how lucky – and ungrateful – so many of us are to be born in peaceful times, and how petty so many of our modern concerns are.

The cathedral, rubble and grass underfoot, surrounded by its shattered brick shell, is testament to that.

Here is a video I made during my visit.