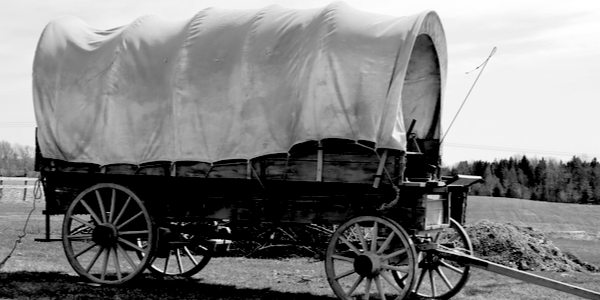 AS a child in the late 1950s, Monday evenings were for me the highlight of the week – because Wagon Train was on the telly.

We didn’t have a television (they were few and far between in those days), but one of my school pals did – hence his popularity. As 8pm neared, his favoured friends would cram into his house to watch the US-made potboiler Western.

Broadcast from 1957 to 1965, Wagon Train told the seemingly endless story of emigrants in covered wagons heading west to California in the late 1860s, under the command of wagonmaster Major Seth Adams (Ward Bond).

Each week would bring some incident, crisis or drama, usually centred around a Hollywood guest star, most of whom we youngsters had never heard of. But we didn’t care – we were there for the adventure.

And there was adventure a-plenty. On horseback ahead of the trundling wagons would be the scout, Flint McCullough (Robert Horton), looking out for hazards such as swollen rivers, a blocked trail, dust storms or unfriendly Indians (they were not yet called Native Americans). Horton was swooningly handsome – the pin-up of the show for many female fans.

Another favourite character, Charlie Wooster (Frank McGrath), was a bearded, grizzled old trail hand who acted as cook for the wagonmaster and his colleagues.

Barely an episode would go by without a scene where Charlie rustled up plates of stew and one of the crew would spit it out disgustedly, exclaiming something like: ‘God! This stoo tastes horrible, Charlie!’  Inevitably, stew became stoo for us increasingly Americanised kids.

Each episode would end with the wagon train setting out for another day’s trekking. Flint would be on a faraway hill checking all ahead was well, then Major Adams on horseback would wave a beckoning arm with a shout of: ‘Wagons, ho!’

In November 1960, the shock news came of Ward Bond dying suddenly of a heart attack. We kids wondered what would happen – would his death, Heaven forfend, be the end of Wagon Train? However, Major Adams was quickly replaced by Christopher Hale (John McIntire), and the wooden wheels kept rolling West.

Another shock was when in one episode, the wagon train finally reached California. Again, our young hearts sank. Happily, the wagonmaster and his men promptly turned back east to pick up another party they could lead across prairie, desert and mountain via another umpteen Monday night episodes.

My memories of Wagon Train returned when I read recently that this year is the 180th anniversary of the first organised emigrant wagon train to California.

On May 1, 1841, a 70-strong party of settlers began the 2,000-mile journey from Independence, Missouri, along what became known as the Oregon Trail.

Oregon was then the promised land for many, with thousands of acres of land freely available to those willing to farm it. California – even though still Mexican – was also an increasingly attractive option with its fertile valleys.

When the 1841 wagon train reached Idaho, the party split up – one section travelled on to Oregon while the other turned south-west, reaching California on November 4. With the US takeover of California in 1846-1847, hundreds of thousands would follow, especially when the ‘Forty-Niners’ started the gold rush.

Having done a quick Google, it’s interesting to see how the depictions in Wagon Train didn’t quite measure up to the reality. It seems few emigrants rode in the bucking, bouncing, rattling wagons, which had no suspension – walking or riding on horseback was less of an ordeal.

Neither did most people sleep in the wagons, except when ill. They mainly spent the night in tents or on blankets in the open air.

Many wagons were pulled by bullocks, which were hardier and more docile than horses and could live off sparse grazing. And, rather than being stretched out in a long line, wagons travelled abreast if possible to avoid being enveloped in dust.

Perhaps most disappointingly for those of us brought up on stirring tales of Cowboys v Indians, it seems Indian attacks – with the wagons circled, arrows flying and guns blazing – were relatively rare.

By 1869, the completion of the transcontinental railroad (built in just six years – HS2 advocates take note) brought the age of the wagon train to a close. It was easier, safer, quicker and cheaper by rail.

It’s remarkable to realise, as pointed out by George MacDonald Fraser in his book Flashman and the Redskins, that the emigrant settlement of the American West was so swift that a child who crossed the Plains in a wagon train during the Gold Rush could have lived long enough to watch a television programme about it.

Although its history was brief, the romance and adventure of the wagon train lives on and is an integral part of American folklore. However, the recipe for Charlie’s stoo seems – mercifully – to have been lost somewhere along the trail.

Share
Facebook
Twitter
WhatsApp
Email
Previous articleDon’t suffer in silence, speak out against the control freaks
Next articleCovid, a brilliant way of transferring money from the poor to the rich