NewsPaperthe art of publishing
HomeNewsWe love France, Boris? What a load of Gauls!
162

We love France, Boris? What a load of Gauls! 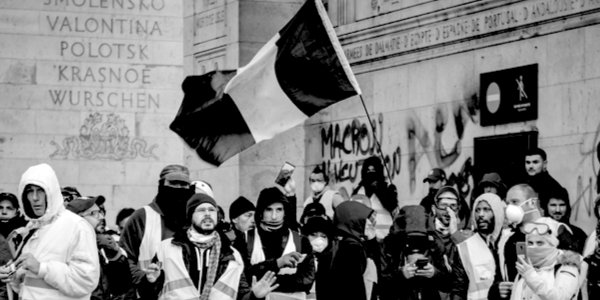 ASKED this week about the supposed snub to France resulting from the controversial AUKUS submarine pact, Boris Johnson insisted: ‘We are very, very proud of our relationship with France . . . our love of France is ineradicable.’

Ineradicable? Our love of France? Well, Johnson was understandably trying to smooth the ruffled feathers of the little Gallic rooster Macron. But the history-savvy PM must have known he was being more than a little economical with the actualité.

We may get on well enough these days with our neighbours across the Channel. But there hasn’t been much love lost between France and Britain for a good part of the last 1,000 years.

Having plunged us into two world wars, the Germans have perhaps tended to be seen as our hereditary enemy. But compared with the French, they were late to the party.

In every century from the 12th to the 20th, the English and later the British fought France in more than 30 wars of varying size and in several minor clashes, right up to 1945. After we finally stopped wielding swords and guns, hostilities continued via sporadic political battles.

Mutual antipathy can be traced back at least to October 14, 1066, when, after crossing the Channel, the army of Duke William of Normandy (aka William the Bastard) defeated the forces of England’s King Harold at the Battle of Hastings.

On Christmas Day 1066, the French invader – who would be dubbed William the Conqueror – was crowned King at Westminster Abbey, a title he believed was his by right.

The Normans (they were originally Vikings who had settled in northern France) were henceforth methodically ruthless at bringing Saxon England totally under their heel.

William parcelled out the kingdom among his knights and nobles, who often took over their new domains by fire and sword. Castles were built to keep the dispossessed population subjugated and to enforce the yoke of the feudal system.

The top echelons of English society were soon Frenchified. But from the 1100s onwards, the Anglo-Normans became involved in squabbles over the succession to the French throne and over their lands in France, leading to clashes with their erstwhile Gallic countrymen.

Then in 1337, when the Anglo-Normans were becoming more Anglo than Norman, came a really big bust-up with the French, the Hundred Years War.

By the time the intermittent fighting ended in 1453, England had lost most of its Gallic lands. Finally, in 1558, Calais – our last possession – fell to the French.

The French were so disliked by many in Britain that in 1751 a group unambiguously calling itself the Anti-Gallican Society was founded to oppose their imports and influences. When the Seven Years War broke out in 1756, the society sponsored a privateer to prey on French merchant vessels.

Jonas Hanway, founder of the Marine Society, encapsulated popular English feeling when he wrote: ‘The French ever behold with envious eyes the bounties which Heaven bestows on this nation and are watchful of opportunities to ravish them from us.’

Britain came well out of the Seven Years War, gaining Canada and India, and was now on the way to becoming the world’s leading colonial and naval power. In the Anglo-French War (1778-1783), the French successfully supported George Washington’s colonial rebels during the American War of Independence.

Then came the French Revolutionary Wars (1793-1802), during which the French landed an expeditionary force in Ireland in 1796 to help republican rebels in an abortive rising against the Crown.

In the subsequent Napoleonic Wars (1803-1815), Britain financed France’s enemies on the Continent with millions of pounds in subsidies and loans. Bonaparte’s plans to invade Britain were thwarted after Nelson’s victory at Trafalgar in 1805, and the Duke of Wellington went on to root the French out of Portugal and Spain before invading France in 1814.

At Waterloo the following year, Wellington finished off Napoleon, with the Prussians – the leading Germanic nation – arriving in timely fashion to help secure victory.

Things then quietened down and in the Crimean War (1853-1856), the French became our allies against Russia. But three years later, there was a French invasion scare here after a falling-out with Napoleon III.

In 1871, France’s dominance in Europe was shaken when it was defeated by Prussia, leading to the creation of the German Empire.

Twenty-seven years later, Britain and France came to the brink of war when a French expedition aimed at gaining control of Sudan was met by a British force on the Upper Nile at Fashoda. The French were forced to back down.

With the 1904 Entente Cordiale, relations became amicale again. From 1914 to 1918, we and the French fought side by side against the Germans in the Great War and again at the start of the Second World War in 1939.

When Hitler’s armies overran northern France in 1940, Winston Churchill urged the French to keep on fighting and made an astonishing offer – an ‘indissoluble union’ of France and Britain, turning the two countries into one nation.

But Marshal Philippe Pétain, who later headed the official French government, the Vichy regime, called the proposal ‘fusion with a corpse’ and after agreeing an armistice, collaborated with the conquerors. Meanwhile, Charles de Gaulle’s Free French forces vowed to continue the fight.

In July 1940, British warships destroyed the French fleet near Oran in Algeria to stop it falling into German hands, killing 1,200 sailors.

What is little remembered today is that in 1941, British and Commonwealth forces fought Vichy troops in French-held Syria to prevent the Germans using the country as a base to attack the Middle East.

Similarly, the island of Madagascar, off Africa’s east coast, had to be wrested from the French by force of arms to stop it becoming a possible staging point for the Japanese.

In November 1942, when Allied armies launched the invasion of French Morocco and Algeria, some Vichy-supporting French troops still opposed them. Finally, after D-Day in June 1944, British and American armies liberated France from the Germans.

Even after the war in Europe had ended on May 8, 1945, we again clashed with our ancient enemy. Churchill ordered British forces into Syria on May 31 to stop French troops slaughtering nationalist rebels.

In 1956, Britain and France once more joined forces to invade Egypt in an attempt to oust Egyptian president Gamal Nasser after he seized the Suez Canal. But the operation ended in a debacle.

So animosity between France and ‘perfidious Albion’ goes back a long way. During the last war and after, the loathing was mutual between de Gaulle and the British, and he twice blocked our entry into the then Common Market.

Of course, it hasn’t all been disharmony. Throughout history, admiration and envy of French culture, chivalry, fashions and manners ran deep among the British elite. Paris became the glorious ‘City of Light’. Towards the end of the 20th century, we even got together to build Concorde and the Channel Tunnel.

But there’ll probably always be an underlying current of suspicion and rivalry between the Frogs and les rosbifs, which from time to time – as with the current AUKUS brouhaha – erupts into something more serious. Plus ça change, as the French say.