We must stand up to the Leftie looters 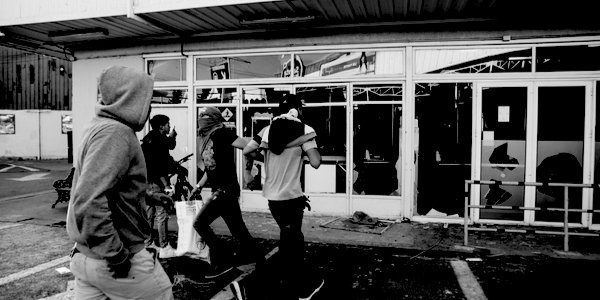 WRITING for the Mises Institute, Ryan McMaken says that it has become fashionable on the Left to defend looting as a means of redistributing wealth from allegedly unworthy business owners to the more deserving looters. He quotes the philosophy of Black Lives Matter organiser Ariel Atkins, as reported in the New York Post: ‘I don’t care if somebody decides to loot a Gucci’s or Macy’s or a Nike because that makes sure that that person eats. That makes sure that that person has clothes. That’s a reparation.’ The implication is that property owners should not have recourse to the law or weapons to defend their property.

McMaken further quotes from a book called In Defense of Looting by Vicky Osterweil, a ‘writer, editor, and agitator’. She makes an apologia for looting by claiming that it is basically a poverty relief programme, and liberates the looter from having to work for a living. Furthermore, looting is an attack on private property which would enable everyone to ‘have things for free’. McMaken attacks this pseudo-political philosophy by showing that looting hurts the very people for whom pro-looting champions claim to be working because regular people work for these looted businesses; that looting victimises immigrant families and others who aren’t remotely members of any ruling class, and that looting hurts low-income neighbourhoods the most. Essentially, looting and riots lead to divestment in lower-income neighbourhoods, since well capitalised and insured businesses can move away to better areas. Looting is not ‘just property’ with no one getting hurt. It hurts whole societies, especially the poor, and those who bring capital, employment and prosperity to lower income neighbourhoods.

This is looting in times, ostensibly, of peace. In times of war, looting, which is also referred to as stealing, theft, the taking of goods by force or pillage, is prohibited by international law, and constitutes a war crime. During WWII, it was punishable by hanging. But as Douglas Murray has written in The Madness Of Crowds, wild ideologues now want to weaponise identity politics to alter our society radically and sever our connection with the past. He has tried to alert people to what is driving these ideologues, what they want and how serious they really are. Because, although most of us still refuse to recognise it, we are living through a unique period of mass derangement. Both in the private and public spheres, people are behaving in ways that are increasingly irrational, feverish, herd-like and unpleasant. I would add to that, consciously and deliberately illegal.

These behaviours are for the time being restricted to minorities, albeit highly vocal and attention-seeking, and where in many cases their desired objectives have been turned down by majority opinions and votes. There has been a history of minority actions involving law-breaking where the objective was to bring about a change in the law, but in such cases, for example the Suffragette movement, their actions were subjected to the full force of the law. Even in the Sunday trading debates in the 1980s, Prime Minister Margaret Thatcher, who was in favour of changing the law, was obliged, when faced with a back-bench revolt, to declare in the House that ‘the law must be obeyed’.

But times are certainly changing, and law enforcement is frequently seen to be reluctant to intervene in cases of civil disobedience. When the Colston statue in Bristol was being violently dismantled by a baying mob, the Chief Constable of Bristol stated that he fully supported his officers when they chose not to intervene, not because of a lack of courage, but ‘because we want the best for Bristol’. He claimed he did not condone criminal activity, but intervening would have risked a violent confrontation. He said there were more than 10,000 protesters, but there were no injuries, no arrests, and one report of damage. What he didn’t confirm was that Bristol police had shown submission in the face of mob violence. Such dereliction of duty can only encourage further, and potentially even more serious, illegal activity.

The ownership and protection of property is a fundamental civic right in societies underpinned by the rule of law, and a failure to uphold that threatens to undermine the very existence of civilisation. Communities break down where law and order can no longer be maintained, as in ‘failed states’, and the situation where law enforcement bodies fail to act to protect the public, in the belief that the causes are fashionably popular, or ‘woke’ or just not worth the bother, can be the first step on the road to this societal decline. In the UK, shoplifting – a form of looting – is considered not worthy of police attention, even though the activity has burgeoned into internationally organised crime syndicates. House-breaking is also no longer considered worthy of detailed police attention. Illegal immigration is not only not prevented and punished, it is now actively supported by publicly funded organisations.

Take this analogy where the situation is reduced ad absurdum. A football match is controlled by a detailed set of rules respected by players and supporters, and upheld by an impartial referee. But there is always the thrill of potentially ‘getting away with it’, for example Maradona and the ‘Hand of God’. Without enforcement of the rules, why not just pick up the ball and run with it across the goalmouth, and shoot any opponent who gets in your way? Hell – why bother with any pretence at a game? Just shoot the other team, place the ball over the line, and to the victor, the spoils!

Without the protection of the rule of law and the forces employed to uphold it, society finds itself on a slippery slope where the very outrage which the law exists to prevent – rule by Might is Right – begins to take over. Evidence of this is already here in the UK and other western countries. It is not up to the silent majority to have to take the law into their own hands for their own protection. They have already exercised their votes to let governments know what they require. The ball (hopefully together with the chain) should now be firmly in the government’s court.