Welcome to Woke Rail – you are now leaving Sanity 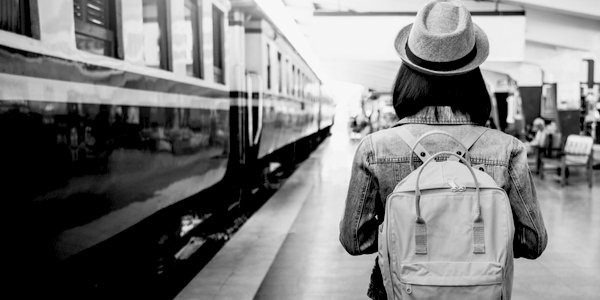 JUST after the turn of the century, the German television station ZDF ran a programme entitled Unsere Besten (‘Our Best’). The idea was to compile a list of greatest Germans, as voted for by the public.

One should always approach the results of such endeavours with scepticism. Among the obvious claimants – Bach, Goethe, Gutenberg– a young man of 18 who came third on Germany’s equivalent to Britain’s Got Talent was voted the fifteenth-greatest German ever to have lived. He ranked one place above Konrad Zuse, inventor of the world’s first programmable computer.

Published in 2003, the rankings would today without a doubt be considered problematisch. In the top twenty there is only one woman – Sophie Scholl – and precisely zero Germans Of Colour.

Naturally, ranking high on a list of all-time famous Germans is not enough to save you from cancellation in this day and age. Germany has for many years been the world’s most proactive country in slating its own history, for understandable reasons. As in every country, however, this trend has accelerated after the death of George Floyd.

Owing to the woke butterfly effect, a man dying in Minnesota means the names of Berlin’s U-Bahn stations must change. The U-Bahn station Mohrenstraße – ‘Street of the Moors’ – was quickly identified as being fit for the chopping block. Soon, the word itself became Berlin’s ‘the M-word’, with the city’s Green party leader refusing to let the ‘simply unbearable’ word pass her lips. Newspapers reporting on the issue censored Mohrenstraße as M*straße.

With the citizens of Berlin increasingly unable to utter the name of the station without having a fit of the vapours, a solution was clearly needed. After a brief and informal stint as ‘George-Floyd-Straße’, it was announced by Berlin’s public transport authorities in July that the station would be renamed ‘Glinkastraße’ after the street at the station’s eastern exit named in honour of Russian composer Mikhail Glinka.

This too, however, was found to be far too problematisch. It transpired to everybody’s surprise that Glinka, living in the first half of the nineteenth century, was insufficiently woke. Supposedly his 1840 work Prince Cholmski contains an anti-Semitic trope or two (let’s hope these same people never get round to watching The Merchant of Venice, otherwise the Bard will soon be banned too).

Readers will be relieved to know that a decision has at last been made on the station’s name. It will be changed to Anton-Wilhelm-Amo-Straße after the first African to attend a European university. Whether this seventeenth century chap from what is today Ghana was sufficiently pro-LGBT and void of anti-Semitism to be accepted by 2020 Berlin has yet to be clarified. Moreover, it remains to be seen what will become of Schwartzkopffstraße (black head street), Afrikanische Straße and Onkel Toms Hütte (Uncle Tom’s Cabin) U-Bahn stations.

It is not just public transport that needs renaming. Ranked second on our previously mentioned list of fabulous Fritzes was Martin Luther, a man whose name was indefensibly culturally appropriated by a certain 1960s civil rights activist.

One may think that being the creator of Protestantism – which claims nearly one billion adherents – would be enough to guarantee you some kind of sympathy in your own country. One would be wrong.

An initiative has been launched in Berlin to rename Martin-Luther-Straße, a major road passing through the district of Schöneberg. The 16th century church reformer stands accused of ‘playing a negative role for exploited people, minorities and women’ and for ‘pouring oil on to the fire of conflict and sowing the seeds of hatred’. Add to this Luther’s other bouts of Intoleranz – anti-Semitism, disparaging remarks about women, the labelling of Muslims as ‘servants of Lucifer’ – and the second-greatest German suddenly falls short of 2020’s Toleranz.

The proposed replacement name is Prista-Frühbottin-Straße in honour of an unfortunate woman who was executed alongside her son in 1540 after accusations of witchcraft. While clearly a tragic character, she is of perhaps less historical significance than a man whose ideas led to the transformation of the world as we know it. For once, sanity appears to have prevailed – at least for the time being – with local Green and Social Democrat politicians saying that a change of name is not on the cards.

(This is not the first time that an inconvenient reminder of Christianity has been targeted in Berlin, with a restaurateur currently in the course of being taken to court over quotations from Scripture on the wall of her eatery, as I wrote in TCW recently.)

Nor are we immune from such madness in the UK. One cannot be sure that Luther would be safe in London, facing the prospect of Mayor Khan’s Commission for Diversity in the Public Realm. Stormzy Streetor Mary Seacole Way would be among the favoured replacements, no doubt.

Our supposedly conservative politicians do not offer much hope on this front. The Conservatives’ candidate for the upcoming London mayoral elections, Shaun Bailey, recently announced his plan to sell the rights to name tube stations across the capital. Goodbye Swiss Cottage, hello Chicken Cottage. Goodbye Tower Bridge, hello KFC Zinger Tower Bridge. Thank goodness for our conservatives and their desire to conserve.

It may one day occur to the cultists of the Left that even after they have changed every street sign, pulled down every statue and rechristened each U-Bahn station, they have solved nothing. Man’s imperfectability and fallen nature guarantee that. Whether there will be much worth saving by the time they have accomplished all of this is another question.