NewsPaperthe art of publishing
HomeStatesideWhat if FDR had lived?
130

What if FDR had lived? 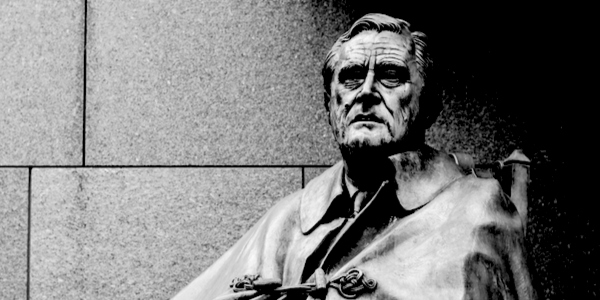 ON Tuesday I wrote in TCW about the US involvement in the founding of the EU, and how the Democratic Party managed to ensure that Harry S Truman became Vice President for Franklin D Roosevelt’s fourth term instead of the popular Henry Wallace.

But what if Wallace had become Vice President and suddenly been faced in 1945 with the smorgasbord of difficult decisions that Truman handled so manfully? As head of the Board of Economic Warfare (1941-1943) Wallace became embroiled in interdepartmental quarrels that ended with the dissolution of the BEW; whereas the Truman Committee  proved to be formidably effective, saving the country many billions of dollars in its war on waste and corruption among defence contractors, through meetings noted for their absence of grandstanding by inquisitors. How well would a Wallace administration have tackled the war in the Pacific, the near-meltdown of post-war Europe, the industrial unrest in America in the switchover to a peacetime economy, and Stalin?

What if Roosevelt had lost the 1944 Presidential election? Comparing the results in 1940 and 1944, we see that even though military service personnel overseas could vote,  the turnout shrank from 62.5 per cent to 55.9 per cent, yet while total ballots cast for the Republican candidate fell by a mere 1.34 per cent, FDR’s dropped by 6.02 per cent. Democrat stayaway accounted for 83.8 per cent of the reduction in overall turnout for the two elections.

Roosevelt’s victory in 1944 was conclusive nevertheless; but there was a bomb that could have gone off under his platform:

‘Dewey [Thomas E Dewey, the Republican presidential candidate in 1944] had learned that decrypted Japanese communications should have alerted President Franklin D Roosevelt to the Pearl Harbor attack and was about to make this a campaign issue. Clarke [Brigadier General Carter Clarke, chief of the code-breaking Army Security Agency]  pleaded that the disclosure would reveal to the Japanese US code-breaking progress. Dewey reluctantly agreed to keep silent, and FDR was elected to a fourth term.’

Imagine the impact on America, which Roosevelt had gradually hauled out of isolationism, of the notion that he might have prevented the Pearl Harbor disaster, and maybe even the USA’s entry into WWII? Would a modern political competitor have shown Dewey’s restraint?

What if Roosevelt had lived and remained firmly in the saddle throughout his fourth term? How would that have influenced the development of America’s relations with Russia? FDR had been warned about Soviet expansionism: his former Ambassador to Russia, William C Bullitt, advised a policy of containment in 1943. However, Bullitt was no longer in good odour with the President who instead agreed with the benign view of his foreign policy adviser Harry Hopkins:  ‘I just have a hunch that Stalin is not that kind of man. Harry says he’s not and that he doesn’t want anything except security for his own country, and I think that if I give him everything I possibly can and ask nothing from him in return, noblesse oblige, he won’t try to annex anything and will work with me for a world of democracy and peace.’

This is not simple proof of Roosevelt’s gullibility. Churchill said of the Hun that he ‘is always either at your throat or at your feet,’ and while Stalin had ruled his developing country for 18 years, Roosevelt had governed his for 12 already and it was a very mighty nation. FDR had fine ideals, but he was also tough, even with allies – brutally so with Churchill, when it suited him. Would Stalin have dared for example, to continue resisting his Yalta commitment to free elections in eastern Europe, if FDR had been there to face him down at Potsdam in July 1945?

Writing in 1970, the New York Times’s C L Sulzberger said: ‘It was not the death of a pro-Soviet Roosevelt and his replacement by a reactionary Truman that touched it [the Cold War] off . . . Roosevelt had reached the end of his patience at precisely the moment his life was snuffed out.’ Sulzberger recalled that Churchill had lamented the tragic timing of FDR’s death, coming as it had when Truman was still getting up to speed with his briefings: ‘It was a tragedy that he had the initial ignorant period. It was then we lost Eastern Europe . . . We should have taken Berlin and Prague where the United States had two armored divisions stranded just three days’ march away.’

It might have been a mistake for Ambassador to Moscow Averell Harriman to admit to Stalin that Truman was ‘not experienced in foreign affairs’. It was not enough (or perhaps too much) for the brand-new President to have told Molotov the Russians could ‘go to hell’ if they did not co-operate over Eastern Europe; but Truman was overwhelmed with a sea of troubles. As he said to reporters after learning of FDR’s death, ‘Boys, if you ever pray, pray for me now.’

Truman was in need of good advisers and an integrated foreign policy. This was to involve the reluctant rescue of Britain, the salvation of Western Europe, and a long campaign – uniting the ‘free peoples’ of the world – against Stalin’s imperialism, which we shall come to next.