NewsPaperthe art of publishing
HomeKathy GyngellWhat is a woman anyway?
112

What is a woman anyway? 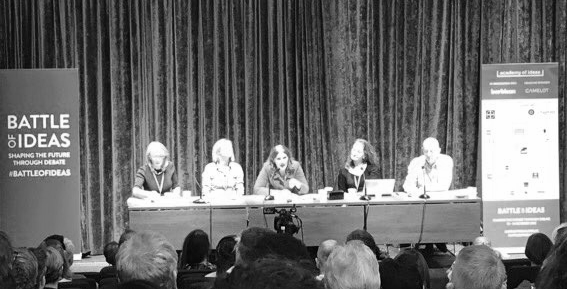 Claire Fox’s inspirational and now annual talking forum, Battle of Ideas took place at the weekend. I was invited to take part in the session entitled Identity Wars: Feminism after #MeToo to discuss ‘What is a woman anyway?’The ‘peg’ for the session was the Conservative Party’s promise to change the law to allow individuals to change gender officially, without medical checks, but simply by self-identification.

You may have read about the battle of respective rights (and victim status) between trans activists and their feminist critics and the wider problems raised and caused by the transgender movement on TCW’s pages. We haven’t pulled our punches. Nor did I here. Here is what I said – in my defence of womanhood:

Don’t you wish it was still the 1970s when life was fun and all we thought about was sex!

Now all we do is angst about gender.

This is the age of grievance politics, society in the grip of an epidemic of narcissism and narrowing horizons. Historians will surely look back in wonder that we could be thinking about enacting a law that allows us to deny biological reality on a whim – to deny what it is to be a man and a woman.

In case anyone needs reminding, a woman is born with two chromosomes, an X and an X, a man with an X and a Y. These are facts that Government and some energetic lobbies like Stonewall would have us believe can be a matter of choice, not birth.

Which is why we’ve been asked:

What is a woman anyway? and

Is there anything worth defending about womanhood?

Yes, they’re questions we should think about before we sign our sex away for good. They are chilling – they sound pretty dismissive of generations of womankind.

How did on earth did we get into this position?

I blame the feminists. The feminist legacy is that all we’re left with as a woman is a body-based identity, up for grabs for anyone to appropriate at will. After the pain, risk and death of thousands of years of childbirth.

We couldn’t have asked such questions 50 years ago when mothers, matrons and matriarchs were still respected – linchpins of family and communities.

Wimmin’s lib put paid to that. Radical feminists weren’t just uninterested in the family – they were positively hostile to it. The more they could make women like men, the closer they’d be to equality.

It was an idea destined to fail, but it has shaped everything. All that has come to matter is the public sphere, and the only status is work.

Women’s commitment to relationships, to family and child-rearing has been subordinated to the male obsession – work. Sexual differences have had to be denied or suppressed.

It was only when I gave birth that I felt the full force of this craziness. I felt the stigma of being a stay-at-home mother and realised that the role most urgent and important to me, bringing up my babies, made me a second-class citizen.

Since then the direction of travel has been one way – to work. Now nothing less than parity will do. Mrs May is on board with enforcing this.

Changes to family life already are little short of revolutionary. Huge numbers are headed by state-dependent single mothers. Outsourced child-care is the norm, and its hidden costs are ignored.

A widening chasm between the sexes;

And for more and more women – single and childless futures.

This is the mess fanatical feminism has got us into. Stripping us of our family life and relationships, women are becoming little more than economic cogs on a lonely work treadmill. This is the prospect for their future.

To top it all, what’s left of womanhood has been reduced to a victim status. If you believe #MeToo we now have no agency at all.

Embarrassing for women like me, but terrible for men as a class tarred with #MeToo’s misogynist, male rapist brush.

And wait for it – this patriarchy victim narrative is the basis of the feminists’ resistance to transgender self-identification. For decades they’ve insisted that men and women were the same and interchangeable. Now that transgenders have taken them at their word, they say they are not!

Well, it’s ground zero moment. The feminist chickens have come home to roost. Are we the same or are we different? They can’t have it both ways. That’s what comes of devaluing womanhood.

This is the one thing men cannot do. What could be more stupid than for women to undercut this, their trump card?

The feminist attempt to denigrate motherhood has denigrated women, because most women still put a high value on relationships and on having and bringing up children.

This is what survey after survey shows:

Nearly half of all women give their primary identity as mother, wife or partner, above their occupation or ‘public’ role.

Mothers want to be able to prioritise their role in the family; ideally working part-time, with the man working full-time.

Women like investing in relationships, in loving and caring – they are good at it – they want to have and bring up children – this is womanhood and society needs it.

What better defence do we have against the fantasy that a man has the right to become a woman as a matter of choice than this?