What we should learn from Peter and Paul 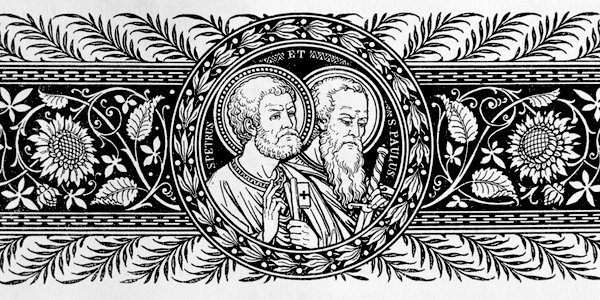 Today is the feast day of two of the most revered saints in the Catholic Church, St Peter and St Paul. Peter was the apostle on whom Jesus built his Church, and the first Pope. Paul was a persecutor of Christians until a vision on the road to Damascus led to his conversion and subsequent colossal efforts of evangelisation.

Paul was beheaded for his Christian activities and Peter was crucified upside down, believing he was not worthy of dying in the same way as Jesus. That Peter knew Jesus personally and died proclaiming his Resurrection adds immense credence to the Gospels. Why would he die for a lie?

Both men worked tirelessly to spread the Gospel and divided the work between them: St Peter’s remit was to convince the Jews of Jesus’s resurrection, whilst St Paul was to convert the gentiles (or non-Jews).

Peter and Paul were converting Jews and pagans and it would be tempting to differentiate too rigidly between now and then.

You might argue that people back then believed in the supernatural and there was no such thing as scientific materialism; that Peter and Paul were trying to convince a society that they were worshipping the wrong gods whereas now we worship none.

However, when people say smugly, with a tip of their fedora, ‘I believe in nothing at all’, it is a religious statement. To believe in nothing is in itself a belief, and so too is the idea that the universe was created from nothing.

The West is becoming Godless but not godless. The secular world has its own multitude of gods and irrational beliefs, just as colourful as the paganism of the Romans and Greeks.

Some of our gods, such as multiculturalism and feminism, require child sacrifices to appease them. The thinking that permits the industrial mass rape of young white girls for fear of disrupting the multicultural dream, or the murder of children in the womb in the name of ‘women’s autonomy’, is religious in nature.

For the third-wave feminist, the demons ‘patriarchy’ and ‘structures’ can explain any problems in the world and the gods of equality and liberation will usher in a new golden age. Woe betide anyone who tries to reason with this ideologue.

I believe in God because of reason, not in spite of it, yet the followers of the new pagan gods see themselves as the arbiters of rationality whilst being completely unreasonable when things don’t go their way. Any event or argument that disrupts their worldview is met with hysteria and horror, as with Brexit and Trump.

So certain are they of their gods of multiculturalism, open borders and progressivism, that this belief not being shared by the whole world is impossible to countenance.

What Peter and Paul, and the early Church fathers, knew was when to go with and against the grain of the culture. For example, early Christian writers drew extensively on Platonic ideas yet denounced the Roman practice of abandoning unwanted babies.

If we, as Christians, can show that we are the reasonable ones, who respect democracy, the rule of law and freedom of expression – values rightly cherished – we will have a chance of re-Christianising the West.

If we can show that we will listen to the public and that we won’t shut down ideas we don’t like, then we can appeal.

Most of all, what St Peter and St Paul show us is that we have to be bold, willing to preach and live Christianity so that it is still intact when we die, just as it was for us. Peter and Paul witnessed to the reason of the cross and thus spoke to the hearts of humanity. We need to do so, too.

The future of the West depends on it.