NewsPaperthe art of publishing
HomeNewsWhat will happen to the Tory traitors?
326

What will happen to the Tory traitors?

LAST week Michael St George wrote on this site about the increasingly totemic role of MPs, whose mission has evolved into representing their government or party to constituents rather than the other way round and providing constituents with a voice in Parliament.

His article examined the overwhelming support in the House of Commons in 2015 in favour of calling a referendum on UK membership of the EU, and in 2017 on invoking Article 50 of the Lisbon Treaty. He contrasted this with the strong preference for Remain among MPs themselves and the current hiatus whose resolution looks set to defy the referendum result.

This snippet from the BBC’s Politics Live show last Thursday illustrates the illogicality of MPs’ behaviour, and the argument advanced in the clip by Wolverhampton MP Emma Reynolds that ‘I didn’t vote to make my constituents poorer’ doesn’t cut much ice: her constituents didn’t vote for the Iraq War but the country voted for a Blair government and got a buckshee Iraq War anyway.

“MPs have a responsibility. I would lock you in a room with limited food and water until this decision was arrived at” City AM’s @ChristianJMay to MPs @EmmaReynoldsMP @DamianHinds on their Article 50, customs union and single market votes#politicslive https://t.co/e8n3YEXQKh pic.twitter.com/k0aZv0Oypi

Leaving aside the probably specious claim that Brexit will make the people of Wolverhampton poorer, how might UK politics develop if Parliament wilfully foozles Brexit with the connivance of Speaker Bercow?

Some commentators predict a bloodbath at the next general election as a settling of the scores between frustrated voters and elected representatives who have gone rogue. But for this to happen, either tribal Tory voters would have to hold their noses and vote massively for Labour while Labour voters move in the opposite direction, or a new party would need to emerge like Macron’s La République En Marche in France, which is almost unthinkable in a first-past-the-post system.

The accepted wisdom has always been that the British don’t riot but a riot of tactical voting is entirely likely, and it is plausible that independent candidates acting individually or in concert with one another might offer themselves to voters in a number of selected seats where the incumbent has been particularly prominent in trying to torpedo Brexit.

The table below lists a number of such MPs ranked by the slimness of their majority at the 2017 election. Anna Soubry in pole position has a majority of under a thousand whereas Dominic Grieve near the bottom of the table looks pretty safe on the face of it with a majority of 25,000. 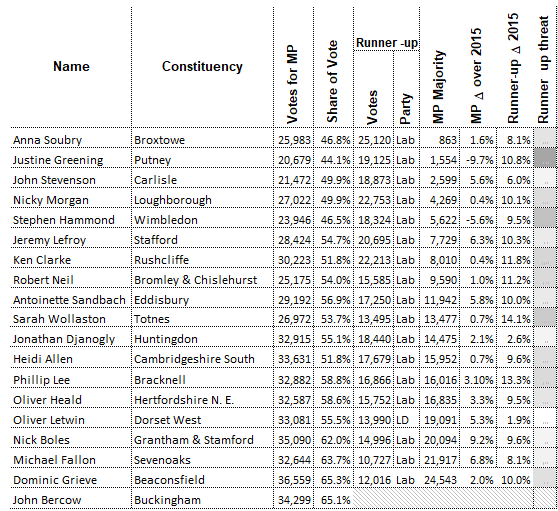 One should also bear in mind how each MP’s position in the 2017 ballot compared with how strongly they performed in 2015, and compare that with the candidate and party who came second. The right-hand column gives an indication of how strong, from dark to pale, the threat from the runner-up might be in a purely two-horse race.

From that perspective, Justine Greening in Putney looks to be more on the slide than the rest. Her support fell back by almost 10 per cent and the Labour runner-up surged by the same amount, so although her majority is numerically larger than Anna Soubry’s, proportionate to the number of votes cast her position and trend look worse. Broadening the focus to include other parties, the Lib Dems put on 5.3 per cent while UKIP and the Greens together lost 6.1 per cent: there can be little chance on current showing for Greening to recoup any of that lost ground.

Another important element is how constituencies voted at the 2016 referendum.

With referendum results counted by district rather than by constituency, there is no clear overlap and so no reliable way of determining how a given constituency voted at the referendum.

Nonetheless, constituencies fall within districts and it is reasonable to assume at least a loose relationship between the two for want of any evidence to the contrary. The following table attempts to link constituencies with their proximate districts, ranking them by the strength of support for Leave. 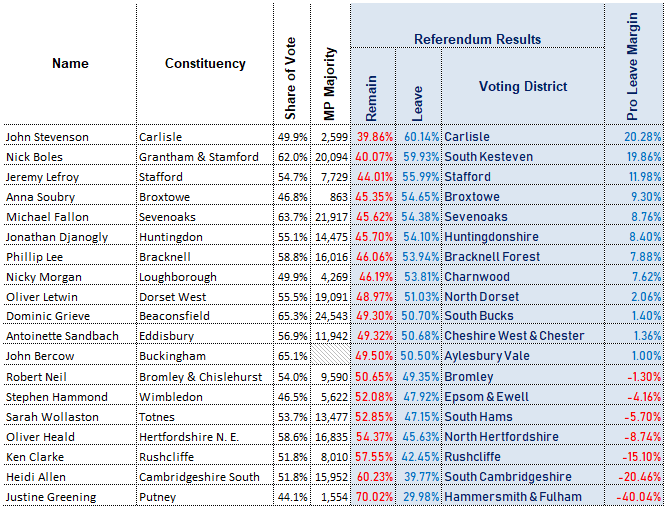 Taking into account the likely preference of voters in the constituencies by extrapolating from the districts, a new strand of vulnerability emerges with John Stevenson in Carlisle looking very much at risk from disgruntled Leave voters, and moves are apparently already under way in Grantham and Stamford to replace Nick Boles.

Another possibly telling indicator is where UKIP’s 2015 vote went in 2017. Many UKIP supporters thought that UKIP’s job was finished once the referendum result was in. These UKIP voters melted away in 2017 but could well return in future and in greater numbers to lend their support to a more sympathetic candidate or simply to punish a wayward incumbent.

The next table shows how the main parties polled in 2015 and 2017 and then compares the 2015 UKIP vote with the 2017 Tory vote and ranks the constituencies according to how disruptive UKIP supporters might be to the status quo. The Speaker’s Buckingham seat at the top is a special case but in second place is Jonathan Djanogly in Huntingdon where UKIP at its height polled almost one third of Djanogly’s vote last year. 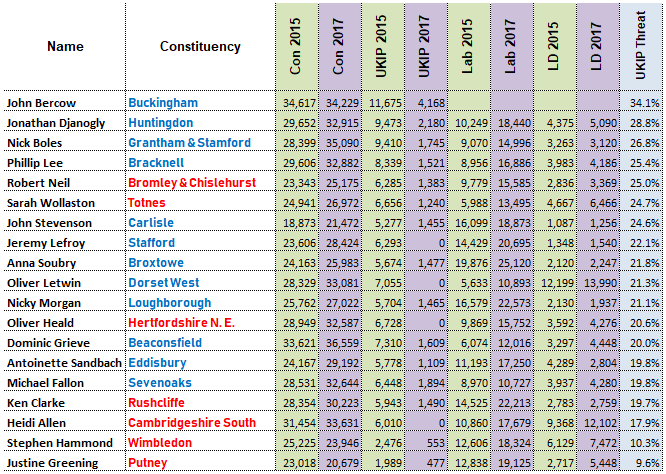 If one assumes that in Huntingdon three-quarters, say, of those UKIP supporters in 2015 who abandoned UKIP in 2017 backed Djanogly, switching that ex-UKIP support to Labour instead would have sliced more than ten thousand votes from Djanogly’s majority.

Turning to the wider picture, overall turnout was higher in 2017 than in 2015 and Labour and Conservatives increased their number of votes by 10.3 per cent and 4.6 per cent respectively, while the Lib Dems, already mauled in 2015 in the wake of their period in coalition, lost a little more ground, as did the Green Party. UKIP support, as mentioned, faded considerably in the wake of the referendum and in three of the constituencies examined here UKIP failed to put up a candidate.

Perhaps there is one thing of which one can be sure, which is that whatever the status of Brexit at the time of the next election, the incumbents listed here, if still in place as candidates, will experience a strong reaction from Leave voters, from those who believe that these MPs reneged on their previous vote and manifesto commitments and those who are offended by the willingness of these MPs to play fast and loose with parliamentary rules.

As things stand, neither of the big parties has the remotest chance of persuading the electorate that it would in future pursue a Leave agenda, so Leave voters wishing to keep Brexit alive or to resurrect it could swing behind an independent Brexit candidate or simply stay at home when a fresh election is called. A UK electorate that stayed away from the UK ballot would institutionalise the EU’s democratic deficit in Westminster.

Conservative constituency associations might be well advised to try to pre-empt a backlash by deselecting their current MP and picking an alternative candidate less likely to enrage voters. Even, or perhaps especially, Dominic Grieve, as lead conspirator and vector of double-dealing contagion which will infect lower-profile Tory MPs, might find himself under pressure from various quarters. Beaconsfield was only marginally pro-Leave in 2016 and his majority in 2017 was impressive, but many of his then supporters and colleagues will be incensed now by his bad faith and his parliamentary shenanigans. If enough of them side with former UKIP voters, Labour Leavers and tactical voters, how far might his 24,000 majority be whittled away?

Ironically, these and other parliamentarians seek to overturn a mandate expressed through a referendum enjoying support at 52 per cent of the popular vote, wider than that recorded in their constituencies by Ken Clarke (51.8 per cent), Heidi Allen (51.8 per cent), John Stevenson (49.9 per cent), Nicky Morgan (49.9 per cent), Anna Soubry (46.8 per cent), Stephen Hammond (46.5 per cent) and Justine Greening (44.1 per cent), all of whom seem to have no doubts at all about their own democratic legitimacy.

The conclusion for voters is this: when the electorate vote to repatriate powers from the EU to their own elected representatives and these representatives then decline to take up those responsibilities, there can only be one way to respond to a roadblock in the democratic process. That is for the electorate to use the democratic machinery to remove the obstacles. CCHQ, their MPs and their constituency parties should be aware of the considerable volatility in voter behaviour that their failure in implementing Brexit will have unleashed.