What would George Orwell make of today’s loony Left? 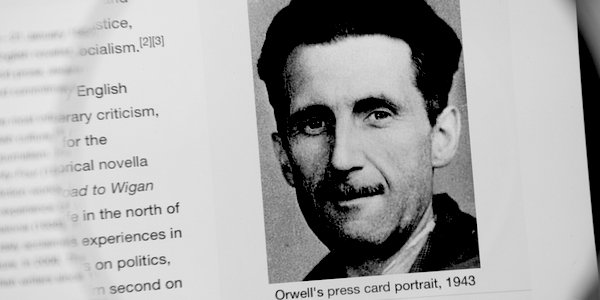 ‘One of the surest signs of Joseph Conrad’s genius is that women dislike his books.’ So wrote George Orwell early in his career.

Perhaps we should not take this assertion too seriously. It was made when Orwell called himself a ‘Tory anarchist’, and was possibly a way of getting back at a recalcitrant girlfriend while cultivating a no-nonsense style.

However, it must be rather hard to swallow for the women on the judging panel for the Orwell Prize, an annual award for political writing: Helen Pankhurst, an academic and feminist activist related to the suffragette family; Tulip Siddiq, a Labour MP and member of the women and equalities select committee; Dr Xin Yao, an academic who is ‘completing a manuscript on the racial and sexual politics of unfeeling as dissent in nineteenth-century American literature and culture’, and Preti Taneja, a writer who has worked as a human rights researcher.

Here, it would seem, we have a nap hand of postmodern Leftism and identity politics devotees.

The Orwell Foundation, which awards the prize, is presided over by Jean Seaton, professor of media history at the University of Westminster and the Official Historian of the BBC. It runs debates on topics such as gender equality: panellists included the unelected Remainiac Lord (Andrew) Adonis and Yasmin Alibhai-Brown, one of modern Britain’s many Witchfinder-Generals of racism. Another discussion was entitled ‘Our overwhelmingly white media are inevitably delivering “white news”.’ TCW’s old friend Grayson Perry has also been recruited to the Orwell Foundation to lecture.

Given all this, it seems reasonable to wonder if the Orwell Prize may go the way of the Turner Prize, an award that cannot be construed in any other way than an insult to its namesake. The Orwell Prize is probably a way off that, but the signs are not encouraging. The sense grows that the panjandrums of modern Left-liberalism have found a new vehicle for their obsessions.

It certainly raises the question of what Orwell, one of the greatest writers of the last century, might have made of it. Certainly he was a man of the Left, but the Left has changed and split into various unlovely factions. In years gone by the Left wanted liberty; now it fights against it while championing state licence. Orwell it was who, gloriously, wrote: ‘If liberty means anything at all it is the right to tell people what they do not want to hear.’ Nowadays that stance will get you no-platformed, cautioned or even arrested. We live in an age where the trendy Left bleat endlessly about #MeToo but find it hard to face the almost unimaginably scandalous disgrace of the Pakistani-heritage sex grooming gangs and the role played by their beloved state in covering up the problem.

Then there is the central Leftist creed of political correctness, or neo-Marxist social policy. Orwell would have laughed at a lot of it. How do I know this? He had no time for much of the Left of his own day and was particularly derisive about some types who are attracted to radical politics. In The Road to Wigan Pier (1937) he wrote about the disturbing ‘prevalence of cranks wherever socialists are gathered together. One sometimes gets the impression that the mere words “socialism” and “Communism” draw towards them with magnetic force every fruit-juice drinker, nudist, sandal-wearer, sex-maniac, Quaker, “Nature Cure” quack, pacifist, and feminist in England’.

PC stands against truth, and as every year passes it and the modern Left’s struggle with reality grows more vicious. Orwell revered truth and when he saw how many on the Left (the sort of people, he said, who take their cookery from Paris and their opinions from Moscow and who snigger at English institutions such as horse racing and suet pudding) were prepared to delude themselves about Communism and to worship power, he corrected them in two of the most renowned books of the 20th century, Nineteen Eighty-Four and Animal Farm. I used to think Orwell went too far in the former book when he said that the authorities would abolish the orgasm. However, when one studies the sullen, resentful, misandrist harridans of social media feminism and academia, not to mention their self-hating male fellow-travellers and PC gauleiters in our civil administration, it seems that Orwell may have been as percipient about that as he was about the Big Brother surveillance society.

He denounced the British Empire as a racket – but would he have embraced multiculturalism and postcolonialism? Accepting the former doctrine requires you to believe that all cultures are equal, modern Britain’s version of Nineteen Eighty-Four’s 2+2=5. I do not see Orwell, a brilliant and pioneering cultural critic who believed writing should be as clear as possible, embracing postcolonial fiction with its self-indulgence, doorstop-sized novels and obscurantism.

Though guessing what Orwell, who died in 1950 aged 46 from complications of tuberculosis, would have written had he lived longer is often regarded as infra dig, I find it an entertaining thought experiment. I do not think he would have ended up writing for the Daily Mail had he lived until 1973, when he would have reached the biblical three score years and ten. However, it is hard to see him getting past the Cold War and the Sixties cultural revolution without trashing the new Left gobbledygook of the intellectuals and any equivocation about Soviet Russia; deploring the decline in all sorts of standards and behaviour; the rise in civic ugliness as pushed by socialist town planning; mocking hippies, whom he would have recognised as the fruit juice drinkers of the Thirties reborn with added egoism and vanity; attacking television (he denounced films and radio as ‘passive, drug-like pleasures’ in the Forties) and generally rubbing neophiliacs up the wrong way. It also seems obvious to me that he would have spotted the democracy deficit in the upper echelons of the European Union, and criticised it accordingly.

Feminism? I think he would have taken the commonsense view: equal opportunities but not the wholesale destruction of the relationship between men and women. Trans? I find it very hard to believe that George Orwell could have accepted the idea that boys can have periods and other absurd instances of doublethink (a word he invented) in modern life.

All of which makes me wonder if those judging the 2019 prize in his name can be entirely happy about the accolade.