Whatever happened to music’s rebel rousers? 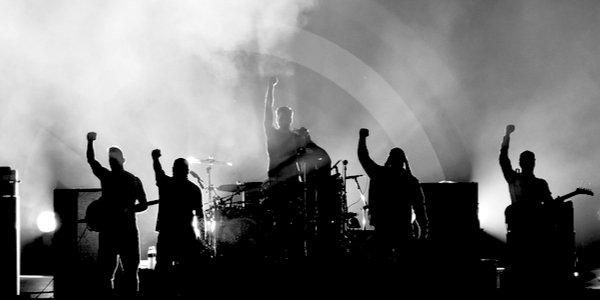 IN 2009 the rap-metal protest band Rage Against the Machine hijacked the Christmas number one spot with the single Killing In The Name, a song which culminates with frontman Zack de La Rocha’s vitriolic yells of ‘f**k you I won’t do what you tell me!’.

The British ‘real music’-loving public had sent a shot across the bows of Simon Cowell and his cringeworthy human mannequins.

In 2020 Christmas was cancelled altogether. How times have changed.

We all cherish songs and albums inseparable from the life-changing events to which they provided the score. They are like vehicles for time-travel or a seventh sense – beautiful harmonic representations of human emotion. They console, uplift and empower.

When I was 13, my best friend and I (unaccompanied by parents) saw the hard-metal band Pantera at the Plymouth Pavilions. Crowd-surfing over the barrier and then dodging a bouncer, I managed to scramble up on stage where legendary guitarist Dimebag Darrell sat me down on the platform’s edge and handed me his plastic cup of beer, and then plectrum, before ripping into the next deafening intro. I was on cloud nine.

Soon I doubt if anybody will be able to enter Plymouth Pavilions without the malicious health passes designed to tear liberal society apart and stultify innocent fun. The fact that two 13-year-olds once managed not only to gain entry but service at the bar is now the stuff of dreams.

A year on from that epic maelstrom of a gig, I swapped thrash-metal T-shirts for chequered Ralph Laurens and trainers for Timberland boots. The female of the species liked dancing not moshing, and so armed with fake IDs, my pals and I threw ourselves into a pulsating local rave scene. We trawled weekly the grotty, violent nightclubs of Plymouth, drunk as lords and hungry for human chaos, sweat, the occasional grapple, jam-packed dancefloors, throbbing beats, hugs, snogs, tears and hopefully not vomit or blood.

Today such proximity to others is perceived as a super-spreading event, and for every large gathering of pathogenic citizens in this, the Petri Dish Epoch, the transmission risk of sub-two-metre fun must be calculated and the rules of the party adjusted accordingly.

The Cranberries provided the rhapsodic backing tracks to my first major crush, and Leftfield helped pick up the pieces the other side. The ever-experimental Radiohead oversaw my graduation from teenager to adult, and Ravi Shankar’s Live at the Kremlin supported me through a rollercoaster three-year stint volunteering in Kolkata. On and on the playlists have always spun, until now.

I never thought I would reach the age of 41 and already be looking back on the halcyon jukebox of my youth through misty eyes more befitting a man twice my age.

Where have the rebel-rousing titans of the music industry been hiding throughout this plandemic? They are not governed by Ofcom, and Facebook and Google cannot yet censor an album or musical performance, as far as I know. We have been free to gather for some months now, so where are the roaring counter-narrative performances so capable of galvanising a unified push-back?

Nine years before they trashed the UK Christmas charts, Rage Against the Machine shut down the Wall Street stock exchange with an unsanctioned, intentionally provocative performance for the video to their single Sleep Now In The Fire, directed by documentary-maker Michael Moore.

The then Mayor of New York Rudy Giuliani had issued a statement the day before, decreeing that the band ‘shall not play on Wall Street’. Zack and Co turned up regardless and let fly.

Who would have the chutzpah to shut down Wall Street or the financial heart of London with a mutinous musical protest these days, during an era in which people are still scared to walk the pavement without donning the comfort-blanket of a useless disposable mask?

Reforming late 2019, Rage Against the Machine promptly cancelled their US reunion tour scheduled for March 2020 due to Covid-19 restrictions, first pushing it back to the summer and then back again to March 2022, a time the band were confident ‘will be safe for our fans’, but with even the new dates remaining ‘health and safety permitting’.

The Rage of old would have set up outside a closed stadium, consequences be damned. Tragically, it seems that even some of the mightiest musical anarchists of the last 30 years have had their political energy dialled down by that which they have always fought so hard to combat – propaganda.

In an excellent TCW Defending Freedom article recently, Mary McGreechin asked ‘How do we turn a march into a movement?’ I pondered this for some time before something occurred to me. Every aspect of contemporary life has a soundtrack, from shopping in the supermarket to driving to work to sitting in a waiting room. Every aspect bar one.

Where are you, Zack? Young people need you to electrify them out of the narrative now, not on the false horizon of 2022: they’ll be receiving booster shots by then. Or have even you fallen asleep in the fire?