NewsPaperthe art of publishing
HomeNewsWhatever happened to the truth?
0

Whatever happened to the truth? 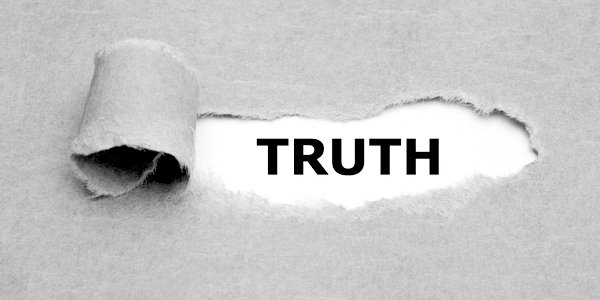 OUR mainstream media claims to be on a relentless search for truth, and yet trust in the truthfulness of the media has never been lower. People simply don’t believe what newspapers and television programmes tell us and increasingly we turn to alternative sources of information who we think will tell us ‘the truth’.

Senior figures in government in the EU, the USA and national governments throughout Europe fared even worse, trusted ‘a great deal’ by between one and two per cent of those surveyed. Religious and military leaders, along with trade unions and business leaders did only marginally better. On the surface it would seem that we yearn for the truth which we cannot find.

Truth challenges and compels. We do not like our deeply held views to be challenged and compulsion to alter our position, especially in the face of rational evidence, is resisted with passion.

The philosophers of post-modernism crashed into Western society leaving in their wake a deep mistrust of truth as a verifiable absolute. They argued not only that truth is not verifiable but that the search for absolute truth leaves in its wake the horrors of the concentration camp and gulag where truths which were held as absolutes left permanent scars on the conscience of mankind.

Truth as objective verifiable truth has disappeared from public discourse to be replaced by ‘points of view’, ‘opinions’ or subjective truths; ‘That may be true for you but it is not true for me.’ We no longer speak of ‘thinking’ something, rather we ‘feel’ something. We no longer ask, ‘what is true?’ the important criterion is, ‘What makes me feel good about myself?’ The emotional dog now wags the rational tail.

This does not prevent contemporary man from confidently identifying moral imperatives which he will defend under any circumstance. Everyone wants to rid the world of perceived monsters, be it racism, climate change, and gender pay gaps or cultural Marxism, multiculturalism, and progressive sexual morality. We do not fear what is false, but what is evil.

In our post-modern world we attempt to have the good without the true. The only compass we have in the disorder of competing moral claims is the consensus of repugnance. Although systems may be recognised as being bad they are not recognised as being false and are only known as false by the unhappiness they cause in the perception of the holder.

This means that the monsters are never slain. Eugenics is rejected outright because it gave birth to Nazism and the horrors that caused, and so eugenics is intolerable to us. The feeling of repugnance is, however, no defence against the rise of eugenics.

Iceland is on course to be free of children born with Down’s syndrome by aborting nearly 100 per cent of those detected in pre-natal screening tests. In the UK about 750 Down’s syndrome babies are born each year, but 90 per cent of women who learn that their child will have, or that their child actually does have, Down’s have an abortion. In Denmark the elimination rate is 98 per cent.

With the abandonment of verifiable truth upon which to base our decisions there are no developed rational arguments against eugenics and a discourse based on emotion has led to Western liberal democracies enacting policies which would have been approved by the Nazis.

When the good has become a rootless patchwork of values which are relative to time and place it can never be an absolute good or a consistent guide to behaviour.

One would think that a society which had abandoned verifiable truth in favour of moral relativism would allow everyone to define for themselves what is good. Yet we live in a day which trumpets tolerance yet pursues moral dogmatism.

With the denial of all objective truth and objective good and their replacement by emotion and what feels good we have obligatory orthodox thought based on feelings. There are opinions which are forbidden and others which are considered mandatory. To differ from the accepted norms because of one’s interpretation of facts is held not be an error of understanding but a moral failure.

One’s political opponents are no longer held to be mistaken with regard to their interpretation of the facts, they are understood to be morally wrong and should be treated with opprobrium when they do not acknowledge their moral failure. Genuine debate is lost and the hope of achieving informed consensus disappears in acrimony and mutual abuse.

Our society has failed to ask the important question, Can we have the good without the true?