NewsPaperthe art of publishing
HomeNewsWhat’s to be done about the West’s plummeting birth rate?
0

What’s to be done about the West’s plummeting birth rate?

It is now largely common knowledge – and not before time – that birth rates in Western and other developed nations are well below the rate of replacement, leading to ageing and declining populations, and storing up serious social and economic problems for the future. 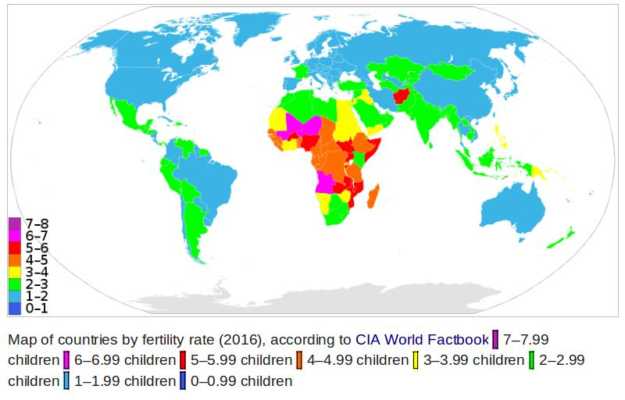 In Britain, as in a number of other Western nations, the situation is even worse than the national figures suggest, since these include the higher birth rate amongst more recent immigrant arrivals. The idea that Europe should look to large-scale immigration to make up for its dire birth rates has been proffered by various public figures in recent years, but such a ‘solution’ can only store up ethnic and cultural tensions for the future, and at worst, risks the final erosion of traditional Western culture and values.

So what is the alternative? To answer this, first we need to ask what lies behind Europe’s declining birth rate.

It’s not ignorance about the best chances for fertility. According to the Fertility Education Initiative, women here are fully aware that they are best off having children in their 20s, and surveys in the US suggest most women want to have children. So what’s stopping them?

The common explanation is cost. People simply can’t afford to have more children, not least because of rising house prices and rental costs. Fertility rates follow closely the fortunes of the economy, rising during the boom years of the 1950s, late 1980s and 2000s, and dipping during the recessions of the 1970s and early 1990s, the 2001 dotcom crash and the 2008 credit crunch and ensuing Great Recession: 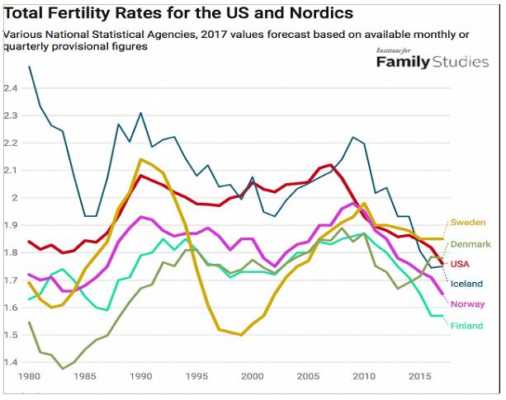 Yet many of the costs associated with children, such as education and medicine, are socialised. Initiatives such as childcare subsidies, parental leave and direct payment have not so far succeeded in appreciably lifting the fertility rate in any country where they have been tried. It is noteworthy that none of these measures advantages marriage or one-breadwinner-couple families. Arguably current policy is funding family breakdown.

Is the decline of religion a key driver? If so, it is not consistent since some of the more religious countries, such as Poland, are no better off than the least religious.

Many point the finger at modern men: self-absorbed and wary of commitment. But what about modern women – are they really all ready to settle down and have their 2-3 children before the biological clock ticks out, if only men would do their bit?

Since the introduction of the contraceptive pill in the early 1960s, birth rates in all countries affected by the cultural and social changes associated with the sexual revolution have nosedived: 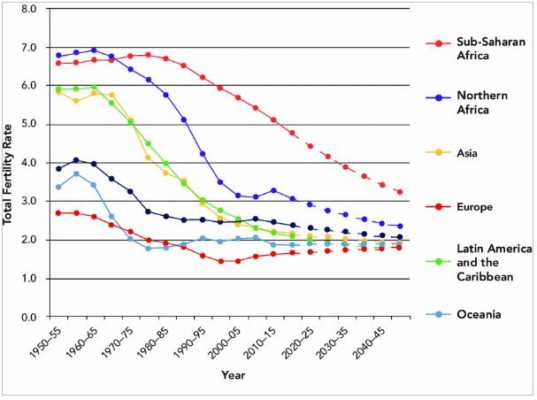 Source: The Journal of Population and Sustainability

These cultural changes go a long way towards explaining the changes in the behaviour and attitudes of modern men. Without any social obligation to marry a woman to have a sexual relationship with her, or even a family with her, a large part of the incentive for men to marry and settle down has evaporated. When it is socially respectable to remain in a state of permissive sexual liaisons and semi-committed domestic arrangements, a great many more men (and indeed women, who should not universally be assumed to be instinctive lovers of commitment and settled family life) will take advantage of that.

Marriage too has been in consistent decline the lowest rate ever between opposite sex couple on record in 2015.

Male fertility is another issue. The average sperm count of men in the U.S. drops 1.5 per cent every year; one in five young men are not fertile.

The post-war baby boom was a relatively short-lived trend running counter to a much larger decline (from 4-6 births per woman to 1-3) that began in most countries around the 1870s, reaching a low in the UK of around 2 in 1940: 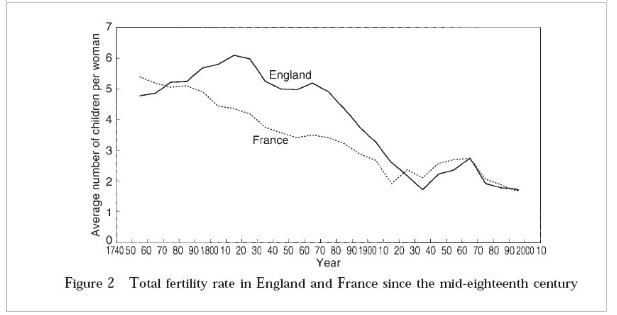 The causes are widely disputed, but chief amongst them is the shift from children being regarded primarily as family assets (especially sources of income, though also family stature and legacy) to being regarded primarily as family costs (to be educated and set up for life). This was driven by many factors, including the suppression of child labour and the advance of universal education.

Simply to discourage contraception would not revive the birth rate. Widespread contraceptive use predated the 1960s, but it did not prevent the baby boom. Not until around 1980 did the fertility rate fall below replacement level. Having said this, it is hard not to see a link between the pill, which effectively places women in a persisting infertile state, and the intensely permissive sexual revolution and continuing rock-bottom fertility. Additionally abortion ‘reform’ has led to the termination of around a fifth of UK pregnancies since 1967. Finally, the effect of women’s education and workforce participation which increased sharply in the 1970s and has grown consistently since, depressing both men’s pay and deferring childbirth, except amongst the poorer benefit dependent classes, cannot be ignored.

So what’s to be done?

This is a vexed question in a culture saturated with feminism and with the main political parties seemingly indifferent to encouraging married family formation, maternity and supporting children through the tax system.

On the contrary, Mrs May’s liberal-progressive priority is gender parity – making men and women more equal in the home. Studies suggesting that the birth rate among working women may be increased by their husbands or partners assisting more with child rearing and domestic duties have not however worked out in practice. A sharp drop in the birth rates of some of the more domestically egalitarian countries such as Norway, Denmark and Finland in very recent years makes this theory look pretty shaky.

Couples who try to balance family commitments with holding down a demanding job each are unlikely to have capacity for more than two children. Yet families having three children or more is what is needed to push the birth rate up to replacement level and above. As the former Australian Treasurer Peter Costello pithily put it: ‘One for mum, one for dad and one for the country.’

Progressive policies of the past 50 years, from easy divorce to on-demand abortion, from sexual liberation to anti-man and anti-motherhood feminism, have all undermined a culture of marriage, family formation and fertility. That this cultural and demographic shipwreck could be salvaged by yet another progressive policy, domestic equality, rather than a wholesale reversal in the direction of travel, is a clear example of inability to see when a prized project has failed and needs to be abandoned.

Whatever the details, the only solution is to be a lot less ‘progressive’ and a lot more ‘conservative’ in family and social policy than we have been accustomed to since the 1960s. That would be real progress.

Share
Facebook
Twitter
WhatsApp
Email
Previous articleWill Barbara Bush’s legacy of literacy go to waste?
Next articleBe it May or Rudd, someone must carry the can for Windrush scandal