NewsPaperthe art of publishing
HomeNewsWhen the Met Office gets in a hole, it keeps digging
0

When the Met Office gets in a hole, it keeps digging

The Met Office’s previous climate predictions have been running far too hot. The latest ones are even more incredible.

The Met Office has released the latest iteration of the official climate predictions that it periodically issues to the country. The last iteration, UKCP09, provided considerable entertainment to climate watchers, after Nic Lewis discovered a major error in the underlying mathematical model, essentially making the entire exercise worthless. The chief scientist at the Met Office at the time, Julia Slingo, admitted Lewis’s central point, but unfortunately the country continued to use UKCP09 as if everything was fine and dandy. Letters from GWPF to the government chief scientist Patrick Vallance, and to the CSO at Defra, Ian Boyd, pointing out that it might not be very clever to use a set of predictions that were known to have a fatal flaw brought back responses along the lines of (on the one hand) ‘the guys are doing a great job’ and (on the other) ‘UKCP18 is coming anyway’. Bureaucracies cannot ever lose face.

Anyway, rather than trawl through UKCP18 today, I thought it might be amusing to look at the first iteration of the UK’s climate predictions, which was called UKCIP02, to see how the predictions are getting on now 16 years have elapsed from its publication in 2002. Unfortunately, the relevant web pages are no longer available, but I found a report on the subject from the BBC, which gives me enough to work on.

So apparently, UKCIP02 reckoned that UK temperatures would be rising pretty fast (grocer’s apostrophe in original):

Annual average temperatures look set to rise by between 2C and 3.5C by the 2080’s.

We are now 20 per cent of the way between 2002 and 2080, so you might expect something approaching 20 per cent of that warming to have taken place – in other words between 0.4 and 0.7°C. In fact warming trends are meant to increase gradually, so something just shy of 0.4°C would still represent a good performance by the Met Office predictions.

So how have UK temperatures evolved since 2002? I’ve updated one of the graphs we used for Paul Homewood’s GWPF paper on the state of the UK climate, highlighting 2002 (pink circle) and the 0.4-0.7°C range (pink rectangle).

It’s not looking good, is it? 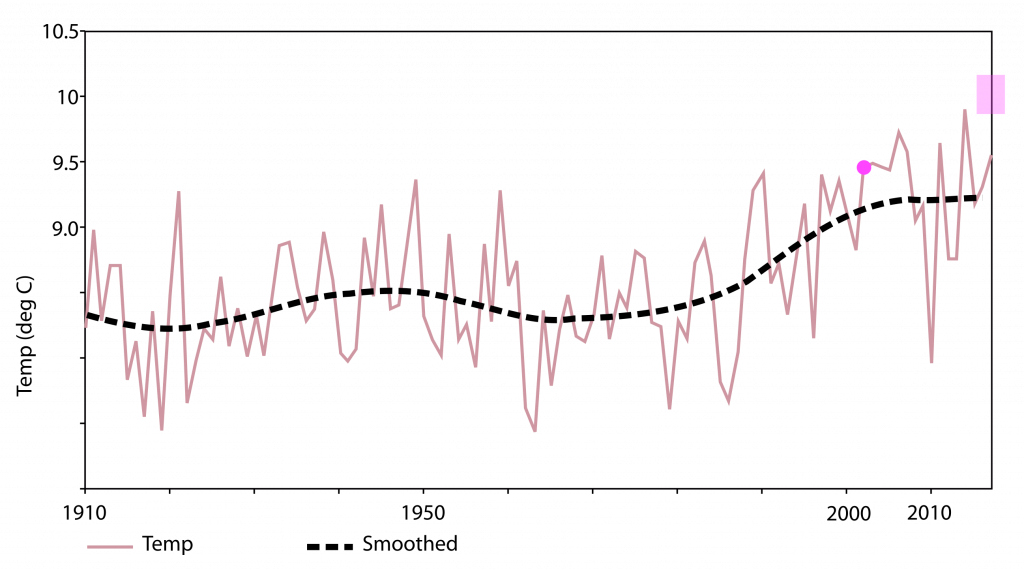 As Homewood points out in his report, UK temperatures have actually been falling slightly since the millennium.

At this point, two thoughts occurred to me. Firstly the temperature in 2001, which was presumably when the UKCIP02 predictions were finalised, was considerably lower than in 2002, so my choice of a 2002 baseline was perhaps a little unfair. Secondly though, thoughts about baselining issues reminded me that it’s far better to look at trends, so that the baseline is not an issue.

The next graph therefore shows the trend since 2001 and the range of the UKCIP02 projections (still with the caveat about whether a straight line warming expectation is strictly correct). 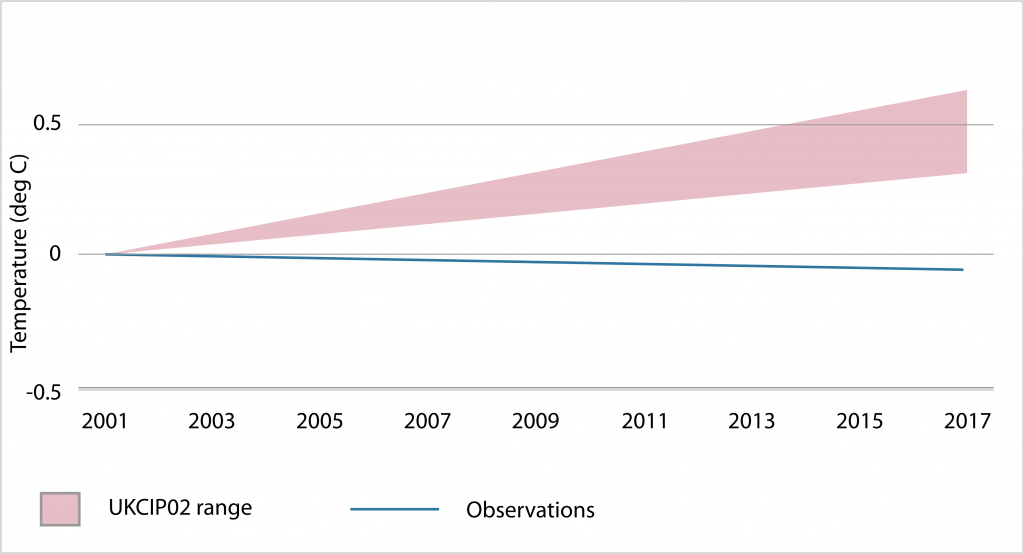 It’s still not looking good, is it?

There is, of course, a great deal on interannual variability in the data, so I guess they might argue that all is not lost, but nevertheless, you might think that the latest set of predictions, UKCP18, might be quite cautious on temperature predictions.

And you’d be wrong. In fact, the Met Office seem entirely undeterred by this evidence that they might be overstating warming. In UKCP18, they are making the following prediction:

They give an even higher figure for summer temperatures in Wales. That means that summer temperatures are going to increase by over 0.1 °C per year, up to four times faster than the rates they predicted in UKCIP02 and which already look to be overstated.

This article first appeared on the Global Warming Policy Forum website on November 26, 2018, and is republished by kind permission.