Where are the Two Ronnies now hate crime’s ripe for ridicule? 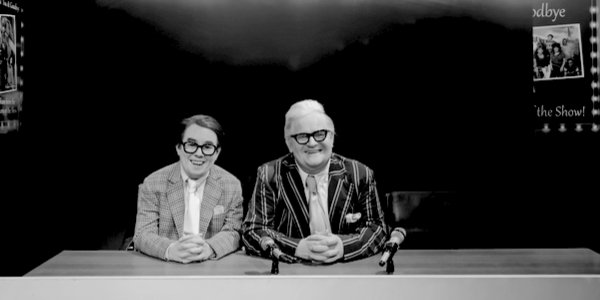 It rained a lot in Broadstairs this bank holiday, so we spent several inclement evenings trawling through Netflix, and came upon the entire output of the BBC’s ‘Two Ronnies’. Quite apart from the brilliance of the Mastermind sketch, the hilarious homonyms in Four Candles, and the sheer silliness of Crosswords on the Train – all comedy gold – the real revelation was in the first episode of the first series: a spoof discussion about Equality. This was broadcast forty years ago, and proves beyond question the validity of Professor Peterson’s argument that the idea of equality of outcomes is a total non-starter; and in Ronnie Barker’s reductio ad absurdum, an extremely funny one. I have searched in vain for a YouTube presentation (those of you subscribing to Netflix can find it easily) but in so doing, I came across the Ministry of Sex Equality sketch, which is just as hilarious, and just as significant. Watch it here.

And you can see the very funny The Worm That Turned spoof on a female political takeover, resurrected by John Smith on Thursday’s TCW.

I hadn’t realised that the Equalities vanguard were already so hard at work even then, and it now seems astonishing that the BBC allowed such a blatantly ridiculing parody to be screened on prime-time TV. The studio audience were loving it, indeed I reckon we all were, because the concept was such obvious nonsense, and gloriously sent up as only the Two Ronnies could. But the Equalities enthusiasts were not put off by the ridicule, and continued to beaver away for thirty-odd years until the Equalities Act finally came into being. It is inconceivable that such sketches would be condoned now on mainstream media. They might even be criminal.

This is symptomatic of many comedy acts these days, not just on the BBC. How subversive that the Two Ronnies’ entire content can still be watched somewhere on the wider media, in all its glorious un-PC splendour – sexist, ageist, even racist, certainly homophobic. (How long will that last?) And yet we all laughed and loved it, with explicit permission from the BBC. Now that all these unacceptable elements, both serious and trivial, have been stripped out from radio and TV programming, what are we left with? Comedy that isn’t actually very funny. The essence of much humour lies in the banana-skin syndrome, the schadenfreude of laughing at the misfortune of others. As many really funny comedians have confirmed, successful humour is frequently offensive, cruel even. But it reassures us: thank goodness it isn’t happening to me. On the whole, this un-PC humour did not incite physical violence between disparate groups. Rather it tended to act as a safety valve, and mutual tolerance was far more common. Is this yet another nail in humanity’s coffin – the rejection, suppression even, of an essential trait of human nature?

But we’ve moved on from the mere Equalities stuff now, and into Hate Crime. Oh, how I long for a Two Ronnies sketch ruthlessly cutting down to size the politicians behind this legislation. It would be a guaranteed laugh-out-loud winner.