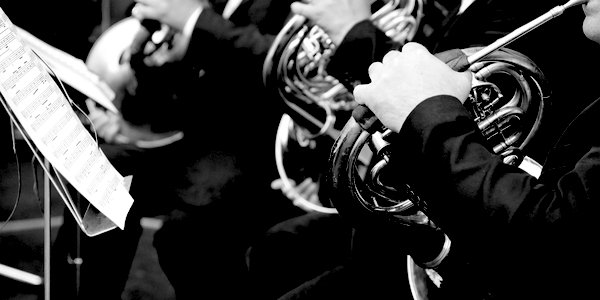 Today I will be watching the Remembrance ceremony at the Cenotaph. I will probably be a bit tearful, but will also note how solemn it is, even the politicians I find so useless somehow managing to do the right thing, with dignity. And best of all, I will listen to the bands. At this event, I don’t find the music especially militaristic. They play much-loved tunes from all four corners of the union, and celebrate what our country represents.

Later on, I will worry about the future of brass bands in the UK. There are many much-loved activities which are steadily declining in this ‘brave new world’ England – writing letters by hand, belonging to the local church, learning Latin, bell-ringing, and – sadly – playing in a brass band.

Of course, the bands started out as part of the military. But they were never just for marching. Even the Royal Marines’ Band has for many years supported outreach work, taking live brass music into schools and organisations. I remember them blasting our eardrums in the school hall with a Rossini overture (while the Year 11 girls in the back row were making eager eye contact . . . ) And of course, the Cenotaph every November.

But there’s a much wider movement involving brass, and it has played an important, even political, role in UK society. One of the original sources was the Salvation Army, and their bands playing in public around Christmas time have become an important part of our seasonal tradition. Their primary purpose was always to support the spreading of the Gospel, and their bands can be powerful evangelistic tools. They are a means to attract attention, and even to entertain. Many were introduced to the movement through its music, and remained committed because of it. But it also provided fellowship, and was considered secondary to the players’ role as soldiers in the movement.

The first Salvation Army corps band was formed in Consett, Co Durham, in 1879, and their use of music went from strength to strength. The International Staff Band was created in 1891, and a rich repertoire of music was adapted, arranged and performed. One of the key factors was that the movement supported, even financed, the instruments and the musical tuition, both of which were normally way beyond the means of ordinary working men and women.

This benefit lasted well into the 20th century. As a schoolgirl and viola player of very limited talent, I was always aware that the brass section of our school orchestra was by far the most accomplished of our motley group. This was because they were all Salvation Army boys, instruments provided, well trained and confident from all their public performances. Indeed in the sixth form, the Luiz to my warbling Casilda in our Gondoliers spectacular was Andrew Keachie, a Salvation Army boy who went on to found the Kilmarnock Concert Band, winning international acclaim, and well-deservedly being appointed an MBE. But as Andrew has pointed out, the volunteers and well-trained musicians are thinner on the ground. The brass band is losing its appeal. A critical factor is the cost of even a basic instrument. According to John Packer Ltd, which specialises in brass and woodwind instruments, a cornet or trombone can cost as much £300. For a euphonium, expect to pay at least £1,000.

Brass bands have always been recognised as the ‘people’s’ music, with many bands continuing the former military tradition through workplace bands, in collieries, railways, sports clubs, temperance groups and friendly societies. They could be hired for functions, but mainly their purpose was a voluntary activity – for recreation, creativity, comradeship. The key factor was the choice of music. These bandsmen knew little of the concert hall or opera house, but they did learn to play serious music. The movement represented the earliest democratisation of classical music, a serious educative development for working class people with limited schooling experience. Every self-respecting town had its band and bandstand, and even in the 1950s I remember sitting on an uncomfortable metal chair at our civic bandstand, hearing for the first time Cavalleria Rusticana and the Magic Flute, played by local worthies in tight uniforms with military caps. Looking back, it was probably not note-perfect, but for me it was life-changing.

We also had our colliery bands, not any great shakes in rural Ayrshire, but elsewhere world class, especially in the north of England and Yorkshire where the bands were an essential part of the Miners’ Galas and all local events. The Grimethorpe Colliery Band, founded in 1917, is a case in point. Colliery bands kept their workers out of trouble, educated them and became a matter of community pride. They were ambassadors for the mining industry. But as it declined, the bands were threatened. In the 1980s, the miners’ strikes paralysed the country as the Thatcher government began to close the mines, often with violent clashes with police. This is depicted in the 1996 film Brassed Off, an overtly political interpretation, but showing how the existence of these outstanding bands came to be threatened by social and financial constraints. Without the colliery backing, who could afford a decent instrument?

This clip below, exquisitely performed by the Grimethorpe band, shows a cornetist having to whistle his part, because he couldn’t afford an instrument (he’d lost it in a game of snooker). But is there a dry eye in the house as they play Danny Boy? The film, with all its ‘Margaret bloody Thatcher’ epithets, did mark the end of an era for the mines, and potentially for their wonderful bands.

Today, Grimethorpe’s MP Michael Dugher says the government neglects this important part of Britain’s working class culture in favour of more ‘high art’ forms. And we already know what the Arts Council funds. The Royal Opera House gets around £40million a year while local bands have to make do with a few thousand. Superb brass band organisations are threatened with going under. Dugher claims this is elitist and socially diminishing.

But all is not lost. Attending a Brass Day Promenade Concert in 2007, we were treated to the best of the international exponents. We had the Karnay musicians from Uzbekistan – greeted with whoops of delight from the enthusiastic audience. And followed up by both the Grimethorpe and Black Dyke bands, playing serious music with outstanding skill. More recently we learned about new brass ensembles playing exclusively classical music. Here is the ‘German Brass’ group, playing J S Bach. We first heard them in the beautiful Thomaskirche in Leipzig – unforgettable.

If you are wondering about your Christmas charitable donation this year, you might like to think about Grimethorpe, constantly threatened with going under, but so far just about managing.

It would be tragic, even undemocratic, to see this valuable element of the UK’s popular musical tradition disappear for lack of funding. Remember, the bands don’t just do fancy concerts at the Albert Hall. They provide a musical apprenticeship for talented young people who would never be able to afford their own £1,000 euphonium.