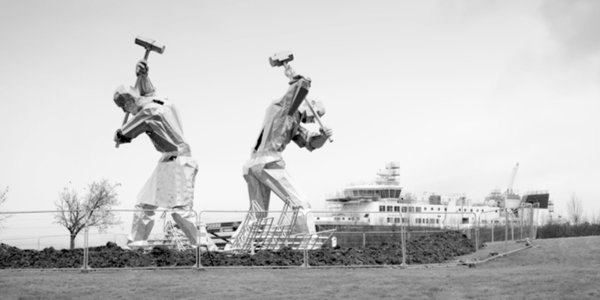 PORT Glasgow has had a sculpture installed in the last month within shouting distance of the government-owned Ferguson’s Yard. The same yard where two Caledonian MacBrayne ferries are enjoying the fruits of the ‘one step forward, thousand steps back’ SNP approach to shipbuilding. If the ferries are for the future (long, long, into the future at this rate), then The Shipbuilder of Port Glasgow by artist John McKenna celebrates the area’s past.

If the job of art is to make one step back and ponder, or to feel something, it’s a job well done. Two gigantic riveters made from 14 tons of stainless steel stand 33ft tall, capturing the movement and the sheer physical efforts of these workers. Although the overall effect is a bit tinfoil-like, it cannot be ignored and the effect is kind of cool. The take-home for me looking at these hard-working heroes is ‘those men worked hard’. It’s refreshing to see a celebration of workers who wouldn’t know or care about mission statements or brands or company values. They just knew how to rivet and would do it for pay. In our times of identity division, a reminder that most of us have a worker identity is no bad thing. Our work today may not look much like those riveters, but we are still workers trying to make our way in the world and earn a living to boot.

Further inspection of these strapping great men brings about another thought. Those men mostly went home to women. The clothes they wore? Washed by women. The living rooms they went home to? Cleaned by women. The meals they ate? Cooked by women. There are few sculptures celebrating the more tedious tasks that were women’s work – the ironing, hoovering, dusting, mopping.  Where is the gigantic Busy Missy (a 1970s doll which you can see here)?  My grandfather worked in those yards. But my grandmother cleaned up after him. He gets a sculpture. She doesn’t.

An international survey by the Centre for Demographic Studies in Spain, involving 200,000 people from Europe, Asia and North America, concluded that women still do 70 minutes more housework than men per day (that’s 426 hours per year). Women, it seems, are still doing the work that men don’t want to do.

Housework is boring, under-valued and never-ending. Who’s up for that? No one. So women do it, most of the time. Women often do the housework as though they see it as part of their care and affection. Women who clean for money are most often paid little and valued less.

Watching politicians from Putin to Johnson to Biden, I think of the very probably female workers who clean up after these men. The wiping of that gigantic desk? Some Russian woman, I’ll bet. I wonder what she thinks as she is cleaning, probably on whatever is the Moscow equivalent of minimum wage. The work that isn’t valued, the work that is invisible, that isn’t celebrated? That’ll be mainly women doing it.

So now, colossal arty men of steel, you really have me thinking.  Maybe everyone who is fit and healthy enough to do so should clean up their own mess. We should all do our own share of boring housework. Hand Putin a mop. Boris and Carrie? Tidy your own Downing Street flat. CEOs at the end of their meetings, get your hoovers out. View of the Hollywood hills? It’s your glass to clean. Value all labour. Budge up, shipworker statues, and give the giant cleaning lady a chance.

Share
Facebook
Twitter
WhatsApp
Email
Previous articleAustralia’s lesson in how to look after patients properly
Next articleFrance, where the voters are both the problem and the solution 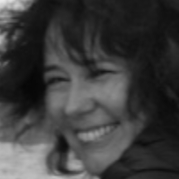