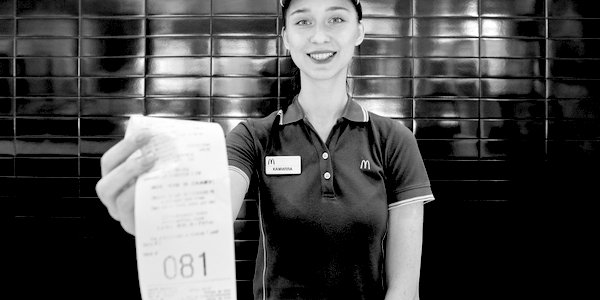 Went to get my flu jab after being told I could visit the ‘walk-in clinic’ between 8.45am and noon. I was there bright and early, to learn that they were doing only ‘priority cases’.

‘Why did you say to come in?’ I asked very politely. (There is a notice on the window saying patients who shout abuse will be struck off).

‘Well, there are two new girls working here and they don’t know anything about the appointments system or the special clinics,’ came the reply. Why would they? This is England, where we pride ourselves on a lack of basic training and accept that no one behind a counter will know anything.

On Sunday I attended an Oxford garden centre, full of enthusiasm for putting in my autumn bulbs. I asked a youth on the till where they kept the bulb fibre. Not only did he not look at me, but he muttered so inaudibly that I thought he had no English, something we’ve got very used to. He was English, but as an older man explained, ‘He’s new here, he doesn’t know anything about gardening.’

And why should he? He’s only going to work in a garden centre, and why would the people who have been there longer make any attempt to train him in the job? This is a land glorying in years of low productivity; besides it might be against his human rights to intervene and tell him anything. We have no hierarchies now, even at work.

This strange attitude, which I believe is unique to England, has gone on for years. I used to visit a large Homebase in west London. There was a Dutchman working there and every regular customer tried to grab him. He could have been Justin Bieber by the way he was mobbed. He was the only assistant working there who knew anything about the stock. I felt sorry for him because he must have been exhausted by the end of the day.

I once bought some paint there assisted by a British Afro-Caribbean youth. He mixed it for me using a computerised machine. At home I found the paint was the wrong colour. ‘Well, he doesn’t know how to do it,’ said the voice on the phone indignantly when I rang up to complain. The white British staff were worse. When I attempted to buy curtains a woman assistant said crossly that couldn’t help me as she ‘couldn’t do metric’. She then went on her tea break.

These memories came back with slight alarm as I listened to Mrs May’s words about the free movement of labour from the Tory conference in Birmingham this week. She knows that Brexit was really all about immigration. Most people who voted to leave did so because they don’t want any more migrants from anywhere. It seems now that we may lose our EU workers but gain others from the rest of the world. India is already offering us its doctors, who they say will return home when they’ve ‘gained experience’.

Mrs May is going to publish her final plans next year. She’s optimistic, claiming: ‘For the first time in decades, it will be this country that controls who we want to come here. At the same time we are training up British people for the skilled jobs of the future.’

Can we really do that, with our culture of low skills, low expectations, grade-inflation and entitlement? If Mrs May means what she says, she will have to bring about a complete cultural change, if not a revolution, in how British people view work. At present they will not do dirty jobs for £5 an hour, but the PM has not proposed to start paying people in the care system a good wage. We need fruit pickers, but farmers have not been instructed to up wages enough to attract home-grown pickers.

When I desperately needed work in 2005-10, as a white, middle-aged, middle-class woman I could get nothing. There was no one like me working on supermarket tills, in cafes or care homes. Part of this was directly due to our EU membership. At the Natural History Museum they had vacancies for guides. There I met a Portuguese girl of 19 who told me that she, like her colleagues, had been recruited via the EU employment website by an agency which took most of her pay. You had to be young, poor and foreign to get the job. The other reasons were more nebulous and sinister. With a degree in history and some teaching experience I tried for a guiding job at the Museum of London. The job spec demanded guides who also had ‘experience in retail and cash handling’. It was really two jobs under the guise of one. Then there was the politics. The doctrine of inclusiveness affects every area of public life. For work in a London museum I needed ‘a second language, Polish or Punjabi preferred’.

After five years of rejection I gave up trying. Too old, too white, over-skilled by having a degree but under-trained in other areas. Giving up acknowledged an ingrained aspect of our culture: outside the professions, below a certain wage level, British people don’t work. There’s no recruitment, no training and no expectation that they will.

For at least thirty years we have developed what I think of as a ‘slave economy’ where the wealthy rely on the poor, very young, and the desperate to do their dirty but essential jobs for a rock-bottom wage. How is Mrs May going to change this entrenched confusion of greed and ideology without making many more of us, from the rich to the poor, much more uncomfortable?