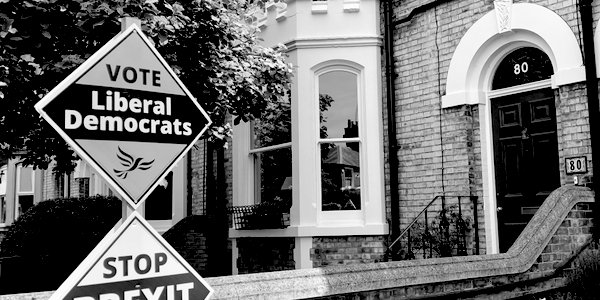 AFTER just two years as leader, Sir Vince ‘Twinkle Toes’ Cable, of sainted sound fiscal mind and judgement, has decided to spend more time with his dancing shoes. The Lib Dems are holding their own leadership election and voters are being presented with two candidates of muddled mediocrity. Largely absent from the airwaves in the media scrum surrounding the Tory Party’s latest Machiavellian leadership manoeuvres, nominations closed on 7 June and Sir Ed Davey and Jo Swinson are now vying for the crown.

Party members are invited to meet the candidates via the website, with Sir Ed enthusing that the ‘planet’s on the ballot’ and vowing to cement the ‘party’s place as the leading force for Remain’. He has the air of one of those trendy Anglican vicars pontificating from the pulpit about the perils of climate change, blithely ignoring the punitive taxes that his party will impose on the very people availing themselves of the food banks in the church hall. Ms Swinson seems very nice with a chummy, girl-next-door demeanour and thankfully, sees a ‘positive future for Britain’, where she exclaims, ‘Wow! Thank you!’ It is not clear what she is thanking anybody for, but as ever with the Lib Dems, throwaway blandishments are the order of the day.

The Liberals’ main objective is to overturn the greatest democratic exercise in this country’s history, articulated by Sir Ed in no uncertain terms at his leadership launch where he vowed to ‘stop Brexit’, echoed by Ms Swinson a day later when she called on Remain supporters from across the political spectrum to flock to the yellow colours as the ‘obvious rallying point to stop Brexit’. Elaborating, she said she believed that ‘we’re closer than ever to stopping Brexit’. Ms Swinson is a clear favourite with the pundits and Sir Ed will have his work cut out to see who can put the wind up the electorate the most, considering that the UK is on a dangerous path towards ‘extreme’ politics; but if he wins, the Lib Dems can be the home for centrist politics and a party for the ‘politically homeless’. Denis Healey’s remark that sparring with Geoffrey Howe was ‘like being savaged by a dead sheep’ comes to mind when any Lib Dem utters apocalyptic pronouncements.

Democracy in action at Westminster, where political flip-flopping has developed into an art form, is best exemplified in the person of the MP for Streatham (2017 majority 26,258) once described as the rising star of the Labour movement, the urbane Chuka Umunna. He announced his defection from Change UK in early June, experiencing a Damascene conversion after his party’s thrashing at the EU elections, joined the Lib Dems and has swiftly been appointed Treasury and business spokesman.

Despite all those tweets that have surfaced disparaging his new party’s time in coalition with the hated Tories, Sir Vince hasn’t batted an eyelid, gushing in praise over his prized political catch and claiming that Umunna ‘has set himself up for the next leadership race’. Not exactly music to the ears of the current contenders, but in the spirit of party unity Ms Swinson gamely played down Chuka’s bashing of the current leader on Talk Radio when the host unhelpfully reminded her of his disobliging tweets. Sir Ed has also welcomed Umunna to the party and suggested that both he and Ms Swinson are ‘unlikely to shift him from the role’ after the party’s internal election. Never mind the voters of Streatham who are being represented by an MP from a party that they didn’t vote for, but all is fair in love and past political principles.

What next might we expect in the game of political musical chairs? After his ejection from the Tory Party leadership circus, could Rory Stewart, darling of the Tory remoaners, turn his self-indulgence to the Lib Dems? It is surely his natural political home.

In the words of Groucho Marx, ‘Those are my principles, and if you don’t like them, well, I have others.’