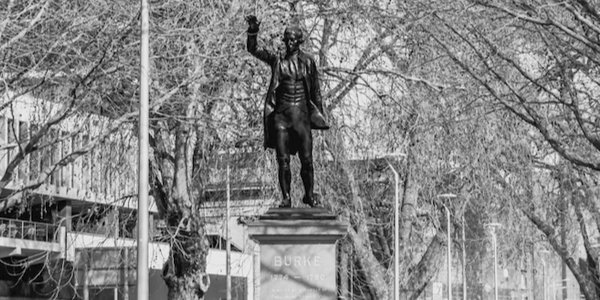 OUR call for you to nominate past and present champions of British liberty and culture who still need to be honoured with statues has brought a heartening response. Here, one TCW reader argues eloquently for his choice …

THERE is already a statue of Edmund Burke in Bristol. He probably wouldn’t approve (‘flattery corrupts both the receiver and the giver’), which is the best reason for erecting another.

Burke was MP for the city, during which time he devised a plan for the gradual abolition of slavery. Today’s protesters would consider this milquetoast enough to tear down his statue, though his scheme came before Wilberforce’s public campaign against slavery began, and was against the commercial interests of Burke’s constituents.

What I most envy Burke for, said Dr Johnson, is his being constantly the same. Burke famously told his Bristol constituents in 1774: ‘Your representative owes you not his industry only, but his judgment; and he betrays, instead of serving you, if he sacrifices it to your opinion.’

He proved this by arguing for Catholic emancipation, ending restrictions on Irish trade and opposing slavery. It was no surprise he lost his seat in 1780.

Burke hated the mob. He condemned those who instigated the anti-Catholic Gordon riots as filling protesters ‘with nothing but a violent hatred of the religion of other people, and of course, with a hatred of their persons; and so, by a very natural progression they led men to a destruction of their goods and houses, and attempts on their lives’. Naturally, Burke became a target of the mob and his home was placed under armed guard.

His opposition to the French Revolution surprised many, as he had been sympathetic to the American one. Before the Terror had taken hold in France, Burke argued that the tearing down of law and order would lead to anarchy and then tyranny.

Thomas Paine wrote his Rights of Man as a rebuttal to Burke’s Reflections on the Revolution in France. Whilst Paine’s romantic sloganeering still makes him a radical darling, Burke was proved right and Paine escaped the guillotine only due to a bureaucratic bungle.

Burke took his principles seriously in ways that his contemporaries found uncomfortable. He launched a long and ultimately unsuccessful prosecution of Warren Hastings, Governor-General of India, for corruption. He opposed the use of the stocks for men convicted of homosexuality. He proposed a Bill to ban slaveholders from being able to sit in the House of Commons, claiming they were a danger incompatible with British liberty.

But it is Burke’s writing that continues to inspire. It’s now a truism that ‘the only thing necessary for the triumph of evil is for good men to do nothing’. Burke shows that less has changed in 200 years than one may think. There were virtue-signallers in his day (‘It is a general popular error to suppose the loudest complainers for the public to be the most anxious for its welfare’).

Before venturing on to social media, one can do no better than to remember that ‘rudeness is the weak man’s imitation of strength’. And Burke has an epitaph ready for those who might wish to destroy his statue: ‘Rage and frenzy will pull down more in half an hour than prudence, deliberation and foresight can build up in a hundred years.’