Why I love Nick Kyrgios 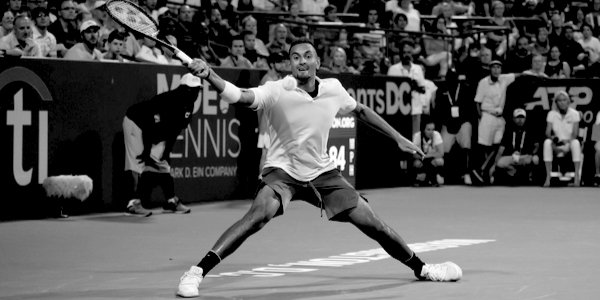 ANYONE who watched yesterday’s Australian Open tennis third round match between home challenger Nick Kyrgios and world No 1 Rafael Nadal, of Spain, was privileged. I yield to no one in my admiration of Nadal but my heart was rooting for Kyrgios. The match went as I expected, Nadal winning in four sets, but Kyrgios emerged covered in glory for his fighting spirit until the last point.

Kyrgios has always had a bad press. He came to public attention as the 17-year-old Australian Open junior champion in 2013 and since then has rarely been off the back page.

He has been criticised for bad behaviour off court – going to pubs and clubs before important matches – and on court – serving under-arm (a legitimate tactic), showing off with fancy shots as here

(even when they are winners), insulting opponents, arguing with officials and swearing. He has been docked points and cash for not trying.

He has not been cut much slack. It is difficult growing up through the teenage years, and some manage it more easily than others. If you are one of those who finds it hard going, how much harder must it be under the gaze of millions of sports fans?

Added to that, Kyrgios is a natural team player, not a soloist. His real love is basketball. He is in his element in a team, supporting and being supported by other players. Unfortunately for him such team opportunities are limited in tennis. He might feel better with a permanent coach but has never had one, instead surrounding himself with family and ad hoc helpers.

I believe he is on the autistic spectrum. He has major difficulty with concentration, which was highlighted yesterday as he was preparing to serve. A yearning female voice called out ‘Rafa . . .’ Without missing a beat Kyrgios shouted:  ‘He’s married.’ Funny, but he should not even hear the distraction, let alone respond.

But he is learning to rub along with others. He has pledged AU$200 to victims of Australia’s fire emergency for every ace he serves this season, and has already raised several thousand dollars. Yesterday the Melbourne spectators, often harsh critics of Kyrgios, took him to their hearts. And he played his heart out for them. His previous match was a gruelling five-setter and I don’t think he could have done more.

Kyrgios is a supreme tennis player – technically sound, imaginative and entertaining. The difference between a terrific tennis player and a genius is not ability but mental staying power. If Kyrgios can continue to settle down mentally he will be a world beater.

And this is why I love him – I admire his efforts to master his emotions and to make the most of his talent. It is still a struggle for him and he may not make it but goodness, he is trying.