NewsPaperthe art of publishing
HomeCOVID-19Why is the government getting into bed with Moderna?
159

Why is the government getting into bed with Moderna? 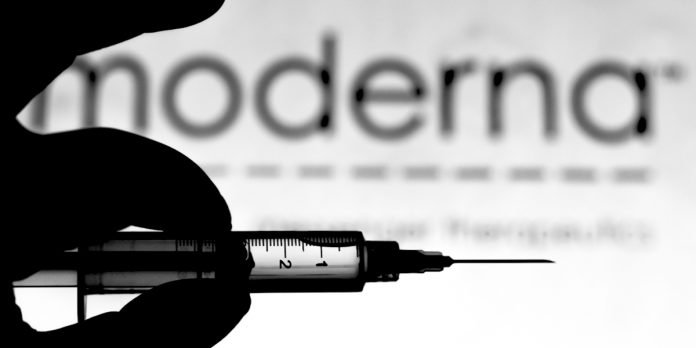 WITH all eyes on the dramatic ‘return of polio’ headlines of last Wednesday and Thursday, a far more significant piece of news was slipped out. It was announced that the Government was partnering with Moderna to open a large research and manufacturing centre in Britain which ‘will develop cutting-edge mRNA vaccines for a wide range of respiratory diseases, including Covid-19 vaccines that can protect against multiple variants, helping to future-proof the UK against potential emerging health threats’.

Lucky NHS patients are to have access to the ‘next generation’ of mRNA vaccines and treatments. ‘The centre will be able to scale up production rapidly in the event of a health emergency, significantly boosting the UK’s ability to respond to future pandemics.’

This worrying press release requires careful reading. It reveals an astonishing gung-ho and uncritical approach to mRNA Covid vaccines in view of their now proven limited or even zero efficacy, and the high rate of recorded adverse events, injuries and deaths associated with them and in particular with the Moderna brand.

It does not tell us how much the Government is investing in this planned ‘mRNA Innovation and Technology Centre’ or where all the money is coming from. From the Centre for Epidemic Preparedness and Innovation (CEPI), the organisation which put up the money for Moderna’s fast-tracked Covid vaccine, that the UK already pays into? Or will some of the billions Moderna has made on the back of their ‘gene therapy’ covid vaccines be invested?

Something was to be gleaned from an interview with the Health Secretary on Wednesday’s BBC Radio 4 PM programme. Evan Davis asked Sajid Javid what Moderna would get in return for their billion-pound investment. ‘Well,’ said Javid, ‘the government’s agreed to buy Moderna’s vaccines, the mRNA ones, for the next decade’. (My italics)

Why on earth would the Government think it right to make such a commitment for new-technology vaccines as yet untested, that we may not need, to a get-rich-quick company that has serious questions to answer about exactly how it created its Covid vaccine so rapidly.

Why, as already touched on, would the government be making such a huge commitment to the producer of the vaccine that gets by far the highest Yellow Card adverse reaction reporting rate in the UK? (The official figures are: Pfizer – 1 in 157 people impacted, AstraZeneca – 1 in 101 people impacted, Moderna – 1 in 43 people impacted.) These represent the immediate risks recipients are exposed to but the technology is so new that there remains a complete absence of understanding of any long-term risks, and apparently no follow-up mechanism to study them.

In this interview we also learnt that it was, in Javid’s words, ‘a huge deal’, and that yes, what Moderna got out of it was a captive and secure market for pretty much whatever vaccines they choose to produce.

‘We all saw during the pandemic the power of vaccines, the difference that they can make. And in particular, with this new technology called mRNA, this platform, we saw how it has literally saved millions of lives during the pandemic. And this technology is transformational. And under this deal, what will be happening is that Moderna will be opening both a global R&D centre here in the UK, carrying out lots of the clinical trials. But also they’ll be building a manufacturing facility here in the UK for vaccines, that will be their largest outside of the United States. So it’s over a . . . well over a billion pounds of investment. It’s a huge vote of confidence in our life sciences industry. But how it matters most of all to me as the Health Secretary is that it will mean that we in the UK, NHS patients, will have guaranteed access to future vaccines and treatments from this exciting mRNA platform. And what that means, it’s more than just Covid or flu, it means that the future sort of health needs in terms of cancer and dementia, cardiovascular disease, you know, these are all things that hold huge potential from this investment’.

When Davis pressed: ‘I’m interested in what they get out of it, because you say obviously our regulators would have to approve any vaccine that we buy from them . . . but we have guaranteed purchases, haven’t we?’ Javid agreed: ‘Yeah, let me explain that. So what we will do is we’ll sign a contract with them which will say, basically, that if you create drugs that our regulator approves and that we actually want for our health system, then we will buy those drugs. And in return what we get in the UK is, is this huge investment and guaranteed access.’

His economic sense appeared to have gone quite astray at this point. What favour Moderna would be doing us if they are to be provided with a promised captive market? Of course we will have ‘guaranteed access’! And why the UK when Europe represents a much bigger market and we no longer have access to the EU single market?

Unfortunately Davis did not ask to whom the £395million government  investment mentioned in the press release ‘to secure and scale up the UK’s vaccine manufacturing capabilities’ has gone to or goes to. To Moderna?

Looking at the updates to Moderna’s confidentiality agreements released to Axios, they appear to be  trying to diversify into the existing market for childhood vaccines and are gearing up to roll out mRNA vaccines for measles and mumps and perhaps now polio and other viruses.

The very real fear is that the MHRA will follow the US Food and Drug Administration’s approach of rapid rubberstamping for new products deemed to be ‘biosimilar’ to existing products authorised on that ‘platform’. Thus minimal testing will be required, the products will get MHRA approval more easily than traditional vaccines, and our children risk being guinea pigs again. The regulatory safeguards for these products that industry sees as ‘red tape’ have been built up over decades to protect users but are now being set aside. Additionally US pharmaceutical companies have absolute protection under US law for liability for defectively designed children’s vaccines. Will the UK now give them the same indemnities?

Mr Johnson’s and Mr Javid’s shared enthusiasm for this novel technology is in direct conflict with the precautionary principle. Either they have not caught up with or are in denial about the extent of the health issues surrounding mRNA vaccination.

If Johnson’s and Javid’s naivete can be excused, Sir Patrick Vallance, the Government Chief Scientific Adviser, must know better. Yet here he is in the press release cheering onthe project: ‘The establishment of the Moderna mRNA Innovation and Technology Centre is great news for the UK’s research and development activities and future capabilities. Rapid cutting-edge vaccines were vital in the response to the Covid-19 pandemic. Developing the next generation of mRNA vaccines will be crucial in boosting our ability to prevent and respond to a wide range of diseases in the future.’

Not so fast, Sir Patrick and Mr Javid. This is not what the latest mRNA vaccine research evidence suggests at all.  A study which summarises the current literature on mRNA and its effects published this month concludes that ‘the many alterations in the vaccine mRNA hide the mRNA from cellular defences and promote a longer biological half-life and high production of spike protein’ causing innate immune suppression. The research paper presents evidence that vaccination induces a profound impairment in type I interferon signalling, which has diverse adverse consequences to human health and says: ‘We believe a comprehensive risk/benefit assessment of the mRNA vaccines questions them as positive contributors to public health.’