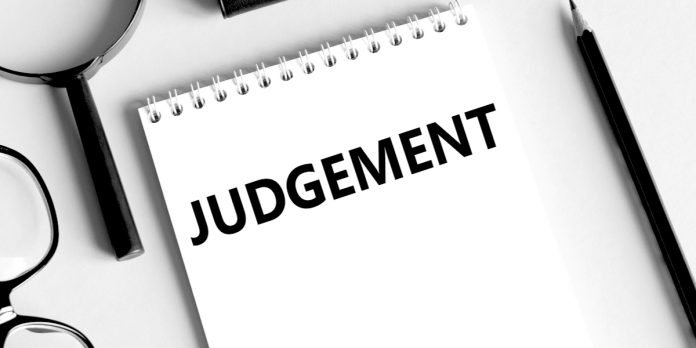 ONE of the defining characteristics of our so-called progressive culture is a purported disdain for judgementalism. In reality, leftists are immensely judgemental.

During my years as a youth worker you were viewed as a heretic by left-wing colleagues and managers if you were perceived to judge too harshly the anti-social and personally destructive behaviour of the young people with whom we worked.

The two definitions of the term judgemental offered by the Merriam-Webster are as follows:

1: of, relating to, or involving judgment.

2: characterised by a tendency to judge harshly

In one such incident, a colleague remarked that I was very judgemental in my dealings with a recidivist young offender who was a resident in the supported housing project where we worked. I reminded her that it was our job to assist him in abandoning his habits of theft and burglary so that he could avoid any further sittings before a judge who, as the title of that role suggests, had no problem with judgementalism.

Like the education system and the police, the entire youth sector from the care system to the youth justice system and supported housing sector is dominated by left wing ideology. Crime and anti-social behaviour are viewed primarily as a result of an unjust economic system and social deprivation. Therefore observations within this sector that primarily focus on instilling individual responsibility with an emphasis on discerning right from wrong are more often than not frowned upon. As a result, instilling individuals with feelings of guilt or, God forbid, shame as positive forces for change are rarely employed.

In trying to initiate positive changes in behaviour among young people, the youth sector prefers to incentivise selfishness and personal gain above moral instruction. In many care homes that I worked in they gave cash rewards to teenagers for conforming to the most basic rules and expectations, such as getting up on time for school, going to school, brushing teeth and not assaulting staff or other care home residents throughout the day.

In supported housing projects and in the youth justice sector the emphasis is on how a change in behaviour benefits the individual first and foremost. When I worked with the youth offending service many of the punishments were in reality rewards. I could never understand how unreformed recidivist car thieves and burglars were being punished for their crimes with workshops in DJing skills or, most bafflingly of all, teaching them rock climbing, which as I pointed out would merely make them more adept at breaking and entering.

My revulsion towards society’s indulgence of crime and anti-social and personally destructive behaviour emanates from my own experiences. As a teenager and into my early twenties I was a blackout drinker, a cannabis addict and later on an amphetamine enthusiast. Yes, there were factors in my childhood that predisposed me to alcohol and drug dependency, but it was my choice to continue to abuse alcohol and drugs that were causing me ongoing problems. At the age of twenty, a few years before I quit alcohol and drugs entirely, I was forced by my family to attend a drug and alcohol treatment centre for counselling. While the counselling wasn’t religious in nature, the centre was run by Catholic nuns who had no qualms in pointing out the immorality of my personally and socially destructive lifestyle and that the responsibility for my behaviour and its effects lay primarily with me. Their approach would have been viewed by many of my future leftist colleagues as ‘harshly judgemental’.

In reality, what they offered was a form of tough love in the hope it would affect positive change in my life. The seeds they sowed eventually bore fruit.

Left-wing critics of judgementalism, who are usually non-Christians like myself, will cite Jesus’s instructions to ‘judge not lest ye be judged’ or ‘let him that is without sin cast the first stone’. They fail to recognise that Christ was merely pointing out the reality that we are all flawed human beings who fall short of perfection and as such he was opposed to barbaric punishments, but he still had strong moral stances on a range of issues as any reading of the New Testament shows.

Non-judgementalism’s greatest flaw is that it is inherently contradictory. Leftists never see that condemning others for being judgemental is a form of judgementalism. They have no problem with moral discernment if it validates or conforms to contradictory progressive shibboleths. They will sneer at critics of Islam as Islamophobes while being vociferous opponents of Christianity. They claim to be cultural relativists while holding western culture in contempt for its flaws and historic wrongdoings while ignoring or rationalising the pathologies of non-Western cultures.

Progressives also criticise conservatives as judgemental prudes for promoting sexual propriety and criticising promiscuity. Meanwhile, Channel 4, one of the broadcasting arms of the British left, airs shows like Naked Attraction where complete strangers hope to find a date by judging each other’s private parts, as we used to call them, on public display. Call me old-fashioned, but I think it’s more respectful for people not to have their genitals out before they ask you for a date. It’s demeaning and degrading to reduce sexual attraction to nothing more but the appearance of the naked body. Shows like Naked Attraction have become acceptable due to the mainstreaming of pornography in society which dehumanises and cheapens sexuality and has deleterious social effects, with women bearing the greatest impact, as excellently articulated here by the writer Louise Perry.

Self-declared social progressives often sneer at the excessive prudery of the Victorian era, but whatever the faults and hypocrisies of the Victorians they were responsible for one of the greatest improvements in material wellbeing in human history and produced some of the greatest art and literature in the history of the Anglosphere. What has the dominant ‘progressive’ culture of the twenty-first century given us? A porn-saturated society, an epidemic of teenagers and young adults who can’t tell whether they are male or female, and strangers rating each other’s exposed nether regions on national television. Judge me all you want, but if this is progress, I think I’d prefer the prudery.