Why marching men in black are a uniform threat to democracy 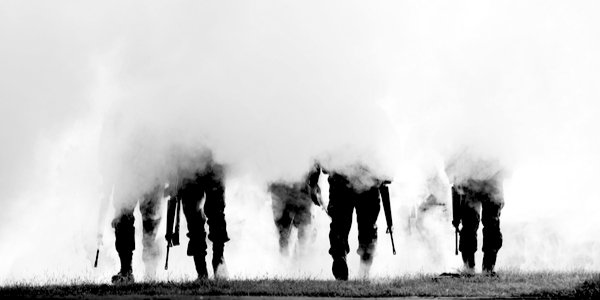 IT’S an idea so widely accepted that it never normally needs to be stated: that in a democracy, with the exception of personal self-defence against crime, only the state, acting on behalf of the people, has the right to use or threaten to use force.

This is an absolute rule that protects everyone from abuse and coercion. Any challenge to that principle, even if only a token challenge, is a threat to our freedom and cannot be allowed.

Paramilitary displays of disciplined drill by military-age men clearly breach that rule. Even if no violence takes place, the implied threat is there.

So the antics we’ve seen recently in South London by activists associated with the Black Lives Matter movement are chilling. Squads of men in black uniforms and stab vests parading in formation through Brixton, marching to shouted commands.

An article in Spiked cautions against over-reacting to these people. It points out that there don’t appear to be very many of them and secondly, can’t we just ignore them as a bunch of fantasists playing political dressing-up games?

There might not be many of them now – they do seem to be a very new phenomenon. I wouldn’t bet that there aren’t a lot more people, from all sections of the radical woke alliance, who wouldn’t want to get involved. Isn’t it always better to deal with problems like this when they are tiny, rather than letting them grow?

As to the dressing-up: yes, it’s ridiculous and reeks of adolescent narcissism, but you could make the same criticism of virtually any group of extremists. Just because someone chooses to make themselves look silly by dressing like Action Man doesn’t mean they can’t be dangerous.

Oswald Mosley’s Blackshirts in the 1930s were just as laughable (deliciously mocked by P G Wodehouse with his ‘Black-shorts’ movement), but they were still vicious thugs who cracked people’s heads.

The over-dramatising of politics, the element of theatre and spectacle that these people carry, even without any threat of violence, is a problem in its own right.

People need to have sensible discussions, to debate, listen and even (though I can’t see it catching on) read books. Prancing around pretending to be a Black Panther or Che Guevara doesn’t make for rational political discourse.

Playing at revolutionaries shouldn’t carry legal penalties if it’s done in privacy – but this seems to be a little more serious. Their uniforms might look home-made and their drill is poorly executed, but they are still making a deeply unpleasant statement.

‘We have muscle and are prepared to use it for political ends. We do not feel constrained by the normal democratic controls – we are ready to use violence; we are threatening you.’ The unspoken accompanying question of course being: ‘What are you going to do about it?’

This is not a free speech issue. These people can argue for their beliefs; say and write what they wish from a multitude of platforms and demonstrate in the same way as anyone else. Rightly so and their free speech must be defended.

But legitimate political protest does not include shows of force, even if relatively paltry, or attempts to physically menace people. And if we allow this and let them push their luck, what comes next?

Will they soon be trying to actively control the streets? We already know that BLM want to defund (read abolish) the police.

What would their replacement be? Their own patrols armed with baseball bats? Checkpoints where your political credentials are interrogated? These events certainly suggest they would be happy with something along those lines.

Fortunately, British law already understands the potency of this sort of behaviour. Since 1936, it has been an offence under Public Order legislation, brought in to deal with the threat once faced from Mosley’s British Union of Fascists, to wear a political uniform in public.

This law still stands. The uniforms we saw were clearly political, albeit political with a very military edge and the police have not only the right, but a clear duty, to arrest people who break this law. Whoever they are.

Can you imagine the clamour if the English Defence League or Britain First had staged something similar? It would be leading every news bulletin, with every worthy you could assemble calling for immediate police action. Justifiably so. I would join in too.

The law and democracy must be defended against any group of extremists.  And if the police do act and there is pushback, if there is violence and disorder; then the police should push back themselves. Only harder and with whatever force needed.

Political bullies must never be allowed to make gains. If police senior management don’t understand that, sack them and replace them with people who do.

Share
Facebook
Twitter
WhatsApp
Email
Previous articleA cracked mirror on our past: After Floyd, teaching history in the US will be harder
Next articleHowzat! When Botham bowled out a team of brainwashed brats