Why the sneering, vaccine-mad Telegraph has lost this reader 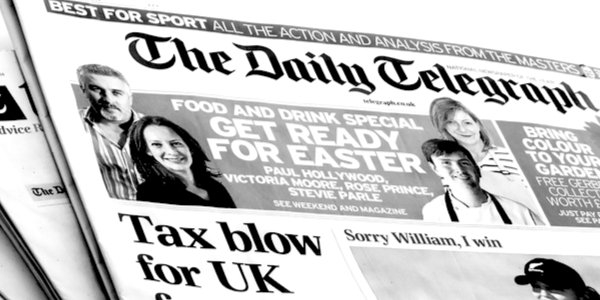 BEFORE the Covid fiasco I used to regard the Daily Telegraph as a reliable newspaper. My unease started with its uncritical acceptance of the first lockdown imposed by this ruthless government with its adherence to certain ‘scientific experts’ whose hysterical pronouncements based on the pseudo-scientific practice of ‘modelling’ was claimed to be ‘THE science’. That phrase (which excluded the contrary views of other highly qualified experts) offended against everything I knew from my study of the philosophy of science – that it requires questioning, rather than parading the views of government advisers as holy writ.

Proper scientific inquiry, as the distinguished philosopher of science Sir Karl Popper lucidly argued, has a ‘falsifiability criterion’ (see his seminal book The Logic of Scientific Discovery). Logically speaking, scientific hypotheses are provisional and can be overturned. Yet the crystal-ball-gazing of the notorious modeller-in-chief Neil Ferguson – with his long record of ludicrously inflated predictions – was heeded without question.

Were the science correspondents at the Telegraph aware of the history of this charlatan? I never saw at that time a single DT article challenging this, or pointing out that ‘modelling’ is circular because it can so easily evade refutation. Wrongly predict an astronomical number of deaths and the likes of Ferguson can always say afterwards: ‘Well that’s what would have happened if we hadn’t locked down.’

Although belatedly the DT has admitted that lockdowns were damaging and unnecessary I am sure this was only because the cat was already out of the bag with Laura Dodsworth’s exposé in A State of Fear of the scaremongering lies told by the government’s ‘Nudge Unit’, and the revelations of Partygate from which it is clear that our rulers didn’t believe their own propaganda about the new Black Death.

Despite the mendacious message that draconian measures were needed to ‘save granny’ (and to protect the NHS) the Telegraph conducted a disgusting campaign to axe the triple lock on granny’s state pension, a campaign which encouraged a cynical opposition between the old and the young.

I almost cancelled my subscription then. But I waited to see how much lower it was prepared to sink. My fears were soon confirmed. Article after article appeared praising the so-called Covid vaccines and demonising those who dared to question them, with the use of smear terms such as ‘anti-vaxxers’, ‘refuseniks’ and other mindlessly dismissive sobriquets.

There was no attempt to engage with or refute many authoritative studies such as those which have been reported in TCW and the Daily Sceptic which have not only questioned the efficacy of these rushed-out drugs, but have pointed to evidence of damaging and dangerous side-effects, and no mention from the DT of the implications of the Pharma companies seeking indemnity against claims for resultant damage. The principle of informed consent was denied to patients who were not warned of side-effects and not told of the Yellow Card reporting system – an egregious breach of medical ethics about which the Telegraph cared not a fig.

In particular, medical correspondent Dr Michael Fitzpatrick dismissed doubters as being guilty of ‘anti-vax pseudoscience’, prompting the UK Medical Freedom Alliance to protest. On September 17 2021 it submitted a formal complaint to Fitzpatrick and the Telegraph concerning his comments published on August 23 downplaying the dangers of administering Covid-19 vaccines to teenagers, and objecting to his ‘trivialisation of the informed consent process’. It called for an immediate retraction of the original article and the publishing of a more balanced comment.

Yet the pro-jab propaganda continued. Even Tim Stanley, who used to be a sensible and honourable Cambridge historian before the lockdown took its toll on his independent spirit, dismisses ‘anti-vaxxers’ as silly. Yet he and his DT colleagues fail to offer proper refutation. Just sneers.

There has been more sense from the Telegraph’s would-be dissident site Planet Normal, a weekly podcast hosted by Allison Pearson and Liam Halligan, which has criticised the government narrative about lockdowns and the scare tactics of its behavioural psychologists, as well as exposing the false claim that the NHS was being ‘swamped’ with Covid cases.  But – even when it is off topic – Halligan feels it his bounden duty to claim in programme after programme ‘we are not of course anti-vaxx!’, a disclaimer ritually intoned as though it were the Nicene Creed.

I cannot believe that Allison Pearson, a sensible journalist who has opposed the proposal and the pressure to jab young children and who is genuinely furious about the damage that the government’s Covid policies have caused, really believes in all the unfettered praise for the Covid clot shots and that she is unaware that even according to official statistics the triple-jabbed are three times more likely to become infected. So one can only assume that her employers at the Telegraph will not allow her (or Halligan) to tell the truth.

I could no more subscribe to such a paper than, if I were a journalist, I could bear to work for it.